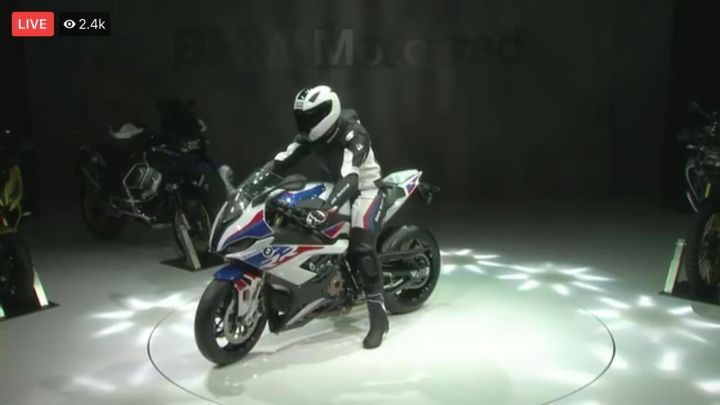 It has been 10 years since the first generation BMW S1000RR debuted and blew the socks off track enthusiasts. To keep up with the times, the litre-class superbike from Munich has now been reinvented, and gets new everything. Here are the details.

Design:
It is more compact than before. Compared with the latest crop of superbikes, the previous generation S1000RR looked bulbous and quirky thanks to its asymmetrical styling. The new one looks smaller and follows a conventional but sharper design symmetry. In place of the oddball headlamp is a new twin-projector LED headlamp setup. The turn indicators now sit inside the mirrors.
The body panels are smaller and symmetrical now. With the minimalistic fairing, the engine sits more exposed now. The tail section sits higher and is more compact. There is no separate tail lamp here. It is instead integrated in the rear turn indicator. The exhaust can has been made smaller by relocating the collector box under the engine. Seat height is 824mm while fuel tank capacity is 16.5 litres.
The instrument console is now a large 6.5 inch TFT colour display that is quite comprehensive, and includes bluetooth connectivity and navigation as well.

Engine:
The all-new 999cc inline four-cylinder engine now gets titanium valves and ShiftCam tech that lets you access power throughout the rev band. It makes 210PS at 13,500rpm, 8PS more that the existing model. Peak torque, at 113Nm, remains unchanged but is now delivered 500rpm earlier at 10,500rpm. Around 100 Nm of torque is available from 5,500 to 14,500 rpm. Top speed is a claimed 299kmph. You have four riding modes on offer: Rain, Road, Dynamic and Race. Other electronics include a six axis IMU that controls dynamic traction control, hill start assist engine brake control and Shift Assist Pro, which is essentially an electronic quickshifter.

Underpinnings:
For the 2019 S1000RR, BMW has stuck with the beam type layout, but the new Z-shaped aluminium twin spar frame now uses the engine as a load bearing structure to reduce weight and also makes it more slimmer and ergonomically more viable. The subframe is a trellis unit to keep the tail section light and aid handling. Like MotoGP bikes, the S1000RR’s swingarm is braced from below. The semi-active suspension can be set for different riding conditions while brakes are from Brembo. You have cornering ABS with two modes: Race and Pro. Unladen weight is 197kg, down 11kg from the existing model. You also have an M package that further drops weight to 193.5kg.

The new S1000RR is expected to be launched in India sometime next year where it will replace the current BMW litre-class sportsbike.