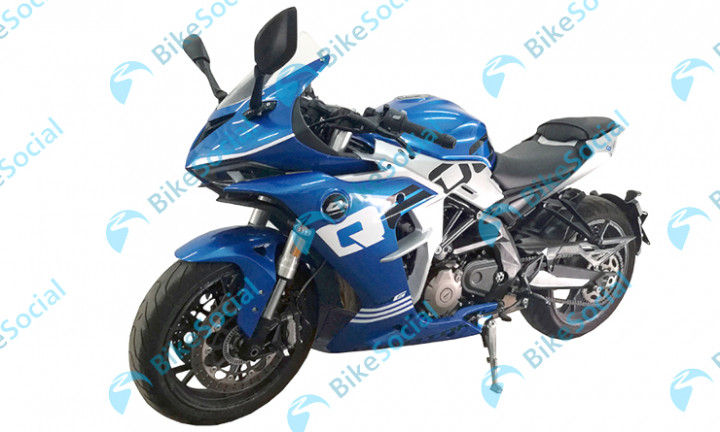 Last week, we saw the production-version of the 2020 Benelli TNT 600 and now, a picture of the upcoming Benelli 600RR has emerged online. The new bike is basically the faired version of the TNT 600 and is expected to make its official debut by the end of this year. After the Benelli Tornado 1130, the 600RR will be the first supersports offering from the Chinese-owned Italian brand. We did get the Benelli TNT 600 GT in India, but it was a quarter-faired touring motorcycle rather than a supersport.

Only one image of the upcoming motorcycle is available and you can see it follows the typical full-faired styling recipe. The headlight appears to be twin LED units and it also features a tall windscreen for better protection against windblast. The blue and white dual tone finish looks good and the riding position doesn’t appear as aggressive as a sports bike. In terms of features, we expect the Benelli 600RR to get the same goodies as seen on its naked sibling like TFT screen, keyless ignition and backlit switchgear.

Powering it is an in-line four powerplant and the only detail we have currently is that it produces 80PS. According to approval documents the bike complies with Chinese emission norms, which means it isn’t BS6 or Euro 5 compliant in its current state. For comparison, the Benelli TNT 600i’s four-cylinder motor pumped out 86.24PS and 54.6Nm, mated to a 6-speed transmission.

The chassis and suspension components have also been carried forward from the upcoming TNT 600. Barking hardware is also similar with a twin-disc setup at the front, but the 600RR employs Brembo brakes with a Bosch dual-channel ABS. It will also be a handful to manage as the bike weighs a hefty 215kg; the recently launched 2020 Kawasaki Ninja 650 tips the scale at 196kg.

Given the COVID-19 pandemic and the fact that the bike doesn’t comply with BS6 emission norms, we don’t see it being launched in India before mid-2021. As for pricing and competition, the Benelli 600RR will be sandwiched between the Kawasaki Ninja 650 and the Honda CBR650R, with a sticker price of Rs 6.50 lakh (ex-showroom).