Two streetfighters that will soon go head to head in the mid-displacement segment in India. Who gets the better of whom? Here's what the spec sheet predicts 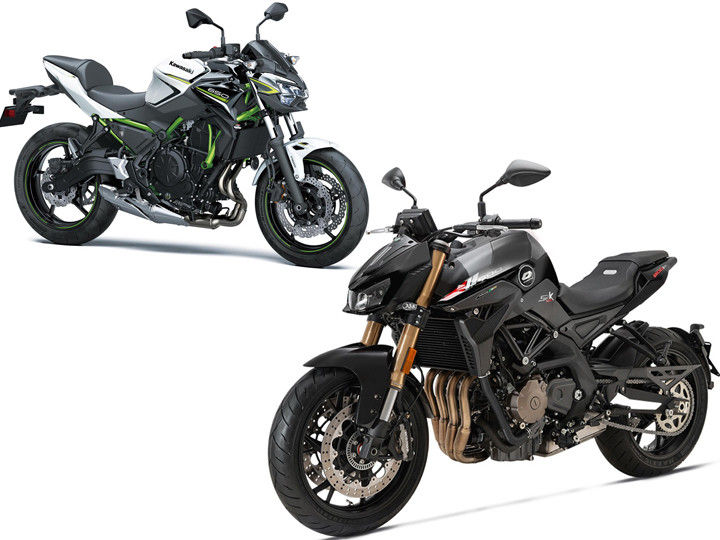 The BS6 Kawasaki Z650 has been enjoying a free reign with no real threat in the 650cc segment for quite some time now. But that’ll soon change once Benelli brings in the 2020 TNT 600 in India. It’s been thoroughly reworked for 2020 and gets an updated engine, some segment-first features and more premium mechanicals. And since it’s a Benelli, it’s bound to be priced competitively. So should the Z650 watch its back?

The Kawasaki Z650 may have more displacement, but it's at a huge disadvantage since it's down two cylinders. The TNT 600's four-cylinder configuration helps it belt out 13.5â€¬PS more than the Z650. It also has a better power-to-weight ratio (411.6PS/ton), despite being 7kg heavier than the Z650. In comparison, the Z650 makes 356PS/ton Z650.

But a bike’s performance can't just be measured in numbers, it's also down to how it delivers its power. And the Z650 may have an upper hand here as it makes 9Nm more torque than the TNT 600 at lower revs. What this means is, the Kwacker may pull off the line a lot quicker. The power may also be more usable than the Benelli, which makes most of its power up top.

Both bikes come equipped with a 6-speed transmission but miss out on a slipper clutch.

Yes, the suspension setup on the TNT 600 may be more premium, but doesn’t exactly mean that it’s better. It all boils down to how the units function in the real world. In terms of braking, both bikes come equipped with twin discs up front and a single disc brake at the rear, with dual-channel ABS as standard. However, the Z650 sources its calipers from Nissin that clamp onto petal discs (known for better heat dissipation). The TNT 600 gets its units from Xihu, a Chinese brand. We don’t know yet how good or bad these units are, so we’ll reserve our comments for now.

The Kawasaki Z650 uses Dunlop Sportmax Roadsport 2 rubbers while the TNT 600 comes armed with Maxxis tyres. Unfortunately, we aren’t aware of the tyre specs on the Benelli.

Also Read: Gear Up For The Benelli TRK 800

The Z650 is lighter and has a shorter wheelbase, which should make it the better handler of the two. However, we wouldn’t discount the TNT 600 just yet as its wheelbase has been shortened by 20mm compared to the previous-gen model (1480mm). The fact that it's 33kg lighter than before should also improve its handling significantly. Having said that,  it may still lag behind the Z650.

What also works for the Kwacker is its low seat height, which should be ideal for average-sized riders. It also weighs less, which means it should be easier to flick into corners or just easier to move around in tight parking spots.

Indian roads are more often than not riddled with potholes and tall speed breakers. The TNT 600 may fare better here since it has a better ground clearance. This, despite having an underbelly exhaust just like the Z650.

We believe the updates have made the TNT 600 a better value for money proposition, which should justify its expected price tag. But then again, Benelli could take us by surprise by pricing the bike well below Rs 7 lakh. Only time will tell.

Both bikes are quite evenly matched so it’s hard to pick a clear winner. But if you’re looking for more features and the sweet sound of an inline-four-cylinder engine, we’d recommend the Benelli TNT 600. And if you’re after Japanese reliability and an engine that offers more usable performance, the Z650 may be a better bet.