Audi Reveals A Go-faster Version Of The Facelifted Q2 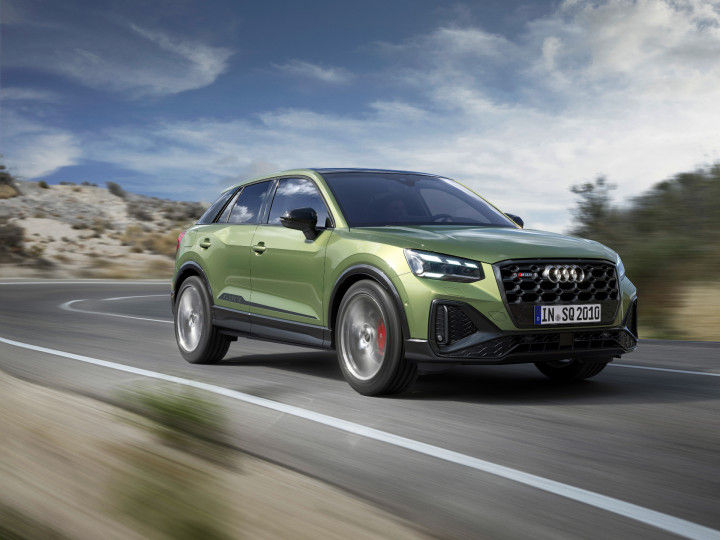 Audi has revealed the SQ2, a go-faster version of the facelifted Q2 that’s offered in Europe. It dials in more performance, better looks, and promises a much sportier driving experience than the Q2. Audi also offers the SQ2 in the pre-facelifted avatar which debuted recently in its standard guise in India.

The SQ2 is powered by a 2.0-litre turbo-petrol engine developing 300PS of power and 400Nm of torque, a full 110PS and 80Nm more than the standard Q2. Power is channelled via quattro all-wheel drive and a 7-speed dual-clutch automatic transmission comes as standard. It is super-car quick, doing 0-100kmph in just 4.9 seconds with a top speed of 250kmph.

Updates have been made underneath its skin as well. For starters, it sits on Audi’s S sport suspension that’s 20mm lower than the standard model. A revised steering rack ensures more direct and agile turning capabilities. It gets five driving modes which alter various parameters: auto, comfort, dynamic, efficiency and individual. The engine also features Audi’s valve system, which changes the stroke of the outlet valve between two levels, resulting in an improved flow of the exhaust gas to the turbocharger for better performance.

The SQ2 looks similar to the standard Q2, but with a host of sportier design features. The bumpers are muscular for an aggressive look while the single-piece grille, which features an SQ2 badge, is positioned slightly lower for a hunkered-down stance. Matrix LED headlights are available as an option. The alloy wheels, which come with options of up to 19 inches, look meaty while the red callipers add character.

The interior has received updates in the form of a flat-bottom steering wheel and sports seats with additional bolstering to hold you in place if the driver decides to have some fun. The smattering of S badges denotes you’re sitting in the sportier Q2. The equipment list is similar to the facelifted Q2 with the main highlight being autonomous driving technology.

The SQ2 will go on sale in Europe for a starting price of EUR 45,700 (Rs 40.39 lakh). Audi has just launched the pre-facelifted Q2 here so we’re unlikely to see the SQ2 anytime soon. However, the Ingolstadt carmaker is gearing up to launch its facelifted S5 Sportback in the coming weeks.