India-bound Audi Q2 Gets A Makeover, Takes Funkiness Up A Notch! 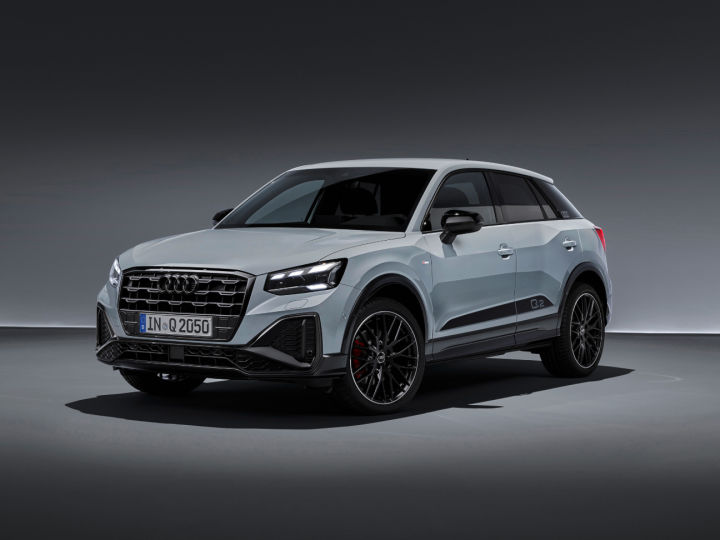 Audi’s India-bound baby SUV, the Q2, has just got a makeover. It brings a slightly tinkered design, cleaner engine options and driver-assistance features to the table. Here’s a closer look:

At first glance, the updated Q2 looks familiar as the basic silhouette remains unchanged. However, zoom in a bit and you’ll notice the revised slatted grille, finished in black. You also get Matrix LED headlamps with funky DRLs while the aggressive airdams in the redesigned bumper look sporty. In profile, changes are limited to new alloy wheels while the rear sees the addition of redesigned tail lamps with dynamic turn signals and a new bumper.

Changes are even more miniscule on the inside with the only noticeable updates being the redesigned gear lever and AC vents. Apart from that, the basic dashboard design is similar to the pre-facelift Q2. We’re also happy that the infotainment system can be controlled via a swivel wheel, making life much easier on the move.

In terms of features, the Q2 comes with Audi’s MMI infotainment system with Apple CarPlay and Android Auto, dual-zone climate control, a Bang and Olufsen sound system, and connected car technology. You also get a host of driver assistance systems such as lane departure warning, park assist and Audi’s pre-sense safety system.

Powering the Euro-spec Q2 is a new 1.5-litre turbo-petrol engine that develops 150PS of power and 250Nm of torque. It features cylinder deactivation technology for added fuel efficiency. Transmission options include a 6-speed manual and a 7-speed dual-clutch automatic. The India-spec model is likely to feature a larger 190PS 2.0-litre turbo-petrol engine coupled to a 7-speed dual-clutch automatic.

We were the first to report about the possible launch of Audi’s Q2 in September. And we hope the carmaker launches the facelifted model rather than the pre-facelift version. It won’t have any direct rivals in the country as it sits below the Mercedes-Benz GLA and BMW X1.