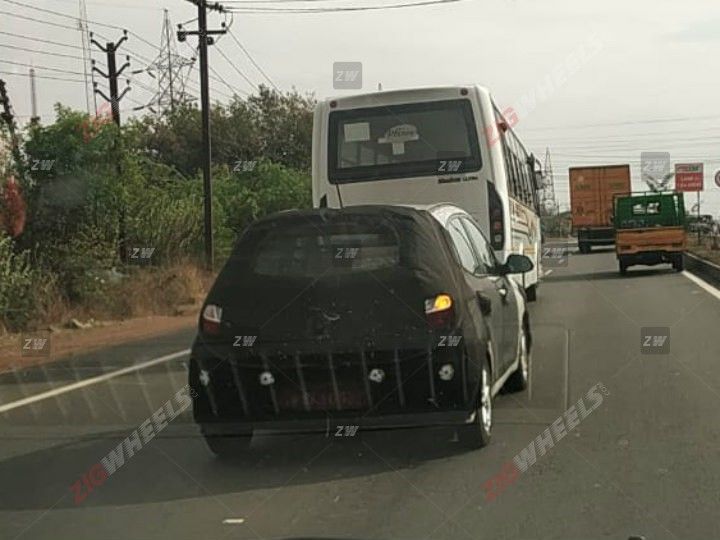 Hyundai’s next-gen Grand i10, which is expected to be launched in India by this festive season, has been spied yet again. While our previous report revealed a heavily camouflaged interior, the new photos give a slightly clearer picture of the car’s cabin.

The spy shots reveal that the new Grand i10 will get a floating touchscreen infotainment system seen on the Venue and will share other parts with its stablemates. The steering wheel is a direct lift from the Venue, while the turbine AC vents and the automatic gear lever are from the smaller Santro. Being a Hyundai, expect the hatchback to be loaded with features like climate control, Apple CarPlay/Android Auto connectivity, steering wheel-mounted controls and more.

Also, though the exterior of the next-gen Grand i10 is heavily camouflaged, it reveals that the hatchback now gets redesigned headlamps. It was seen with a new set of alloy wheels and restyled tail lamps too. It must be mentioned that Hyundai has also started working on the next-gen Xcent compact sedan which has been spied in Europe.

The new Grand i10 is expected to soldier on with the current set of 1.2-litre diesel and petrol units, albeit upgraded to comply with BS6 emission norms. The current petrol engine churns out 83PS and 114Nm, while the diesel produces 75PS and 190Nm. While both engines come mated to a 5-speed MT, the 4-speed torque converter on the petrol variant might be replaced with the 5-speed AMT from the Santro to keep costs in check. Hyundai might also launch a CNG variant, just like the current-gen Grand i10.

As mentioned above, the next-gen Grand i10 is expected to hit our roads by the end of 2019. When launched, it is expected to be priced from Rs 5.2 lakh to Rs 7.9 lakh (ex-showroom) and will rival the Ford Figo and Maruti Suzuki Swift.