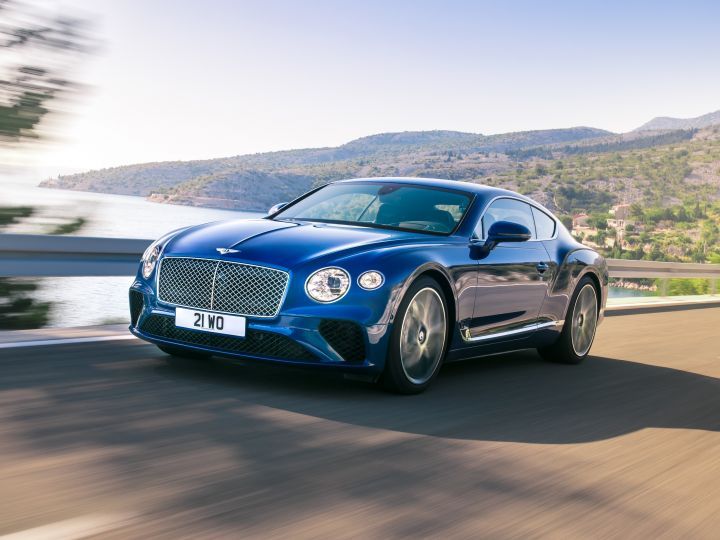 If you’ve been trying to get your hands on a grand tourer but found the Aston Martin DB11 a bit too subtle and the Rolls Royce Wraith too flashy, the Bentley Continental GT might just suit you. Yes, Bentley is launching its flagship grand tourer, the 2018 Continental GT, in India on March 24. The third-generation grand tourer is powered by a 6.0-litre W12 TSI motor mated to a dual-clutch 8-speed automatic transmission. So expect the Continental GT to pack blistering performance and an eye-watering price tag since we expect it to cost around Rs 4.5 crore (ex-showroom).

When compared to the earlier version, the third-gen Continental GT gets more space for four passengers and their luggage. The seats get a new ‘diamond-in-diamond’ leather upholstery with 15 colour options for the hides and carpets. Although it may look similar to the outgoing version, the new GT packs a lot more technology than before. It now gets a fully-digital, driver-focussed instrument panel along with ‘Bentley Rotating Display’, which is basically three-sided wood veneer that revolves to reveal either a 12.3-inch touchscreen infotainment system or three analogue dials that display outside temperature, a compass and a stopwatch. The Continental GT also packs a premium Naim 2200W audio system paired to a total of 18 speakers with Active Bass Transducers built into the front seats with eight sound modes. Phew! That sure is a lot of equipment.

But, if that’s not special enough for you, get this. According to Bentley, the third-gen grand tourer packs a “new, unique quilt” which is not only soft to touch but also recreates “the effect of a floating quilted surface in a sea of leather.” The new interior pattern features both stitching and embroidery. The inner diamonds are embroidered using a specially-designed machine that balances high speed with quality, says the British carmaker. The whole process, Bentley added, took 18 months to perfect.

The Continental GT is now based on an ‘adaptive chassis’ which uses Bentley’s Dynamic Ride System which ensures stability in all conditions by controlling ride comfort and lateral roll. The engine is now positioned further back to improve weight distribution. The new body and materials have helped the car shed more than 80kg over the previous version.

Bentley is known for its superior paint quality and the new Continental GT doesn’t disappoint. There’s a total of 17 colour options to choose from and while the 21-inch wheels come as standard, you can opt for 22-inch lightweight, forged wheels too. When it comes to lighting the road, the new grand tourer gets LED Matrix technology like the one seen in modern Audis. The internal surface of the headlamps are now transparent with sharply defined edges capable of catching the light “like a diamond”.

Finally, let’s talk about the massive engine under that long bonnet. The 12-cylinder behemoth of an engine is paired to an ECU that is capable of making 300 million software calculations per second. The motor produces 635PS of power and 900Nm of torque and is paired to an 8-speed DSG ‘box that helps it accelerate from 0-100kmph in 3.7 seconds and go on to a top speed of 333kmph. This is made possible with a new Active All-Wheel Drive system which replaces the traditional 40:60 power delivery split between the front and rear wheels. Under normal driving conditions, the new GT sends most of the power to the rear wheels as much as possible for optimum efficiency.

In India, the Continental GT will rival the Aston Martin DB11 and the Rolls Royce Wraith.