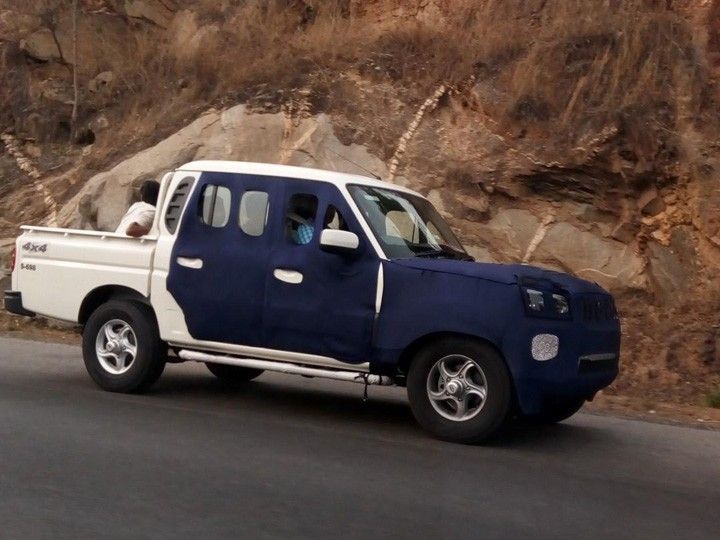 Spied images of the new Mahindra Scorpio Getaway in camouflage have been captured during its on-road testing. With the launch of the 2015 edition of the Scorpio SUV, it was evident that the new changes will be applied to the Getaway model.

Looking at the spy images, the new Getaway features the same front fascia of the new-gen Scorpio. The test vehicle also sports projector headlamps with LED Daytime Running Lamps, as seen on the current Scorpio. The alloy wheels used on the test vehicle are also from the previous generation Scorpio but are expected to be replaced with new ones for the production model. The above mentioned features will be offered in the higher variants of the Getaway. Most importantly, the new Getaway will have the new generation chassis of the new Scorpio providing better ride and handling characteristics.

The interiors of the test vehicle were not visible, but will mostly have the same configuration of the new Scorpio with minor changes. The top-end models are expected to have the dual-tone dashboard with the 6-inch touchscreen infotainment system in the centre console. GPS navigation will also mostly be provided in the top-of-the-line variant.

The new Mahindra Getaway will continue to be powered by the 2.6-litre 4-cylinder, turbocharged DI engine that registers output of 116PS of power at 3800 rpm and 227Nm of peak torque between 1700-2200 rpm. The engine will be mated to a five-speed manual gearbox driving the rear wheels, while the 4WD version will be available separately.

The new generation Scorpio Getaway is expected to be introduced in the market by end of 2016.