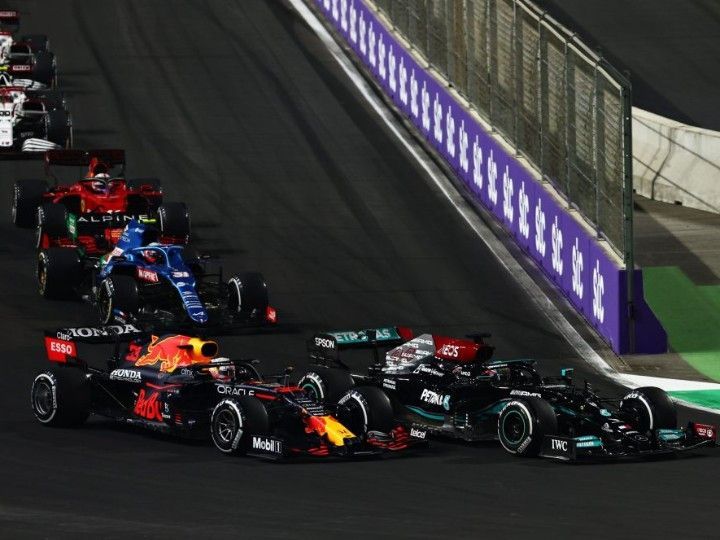 The last seven days saw Formula One and Formula 2 have chaotic penultimate rounds of the season at Jeddah in Saudi Arabia. We also had preseason testing for the 2022 Formula E season take place at Valencia. Here’s all the deets over the past week:

Mercedes’ Lewis Hamilton took quite the chaotic 103rd career win at Formula One’s inaugural Jeddah Grand Prix. The Briton overcame red flag periods, multiple starts as well as a collision with title rival Max Verstappen enroute to the race win. Teammate Valtteri Bottas managed to snatch third place from the Alpine of Esteban Ocon on the final lap by just a tenth of a second.

This win sets the scene for the perfect tie-breaker showdown worthy of a season finale with Hamilton and Verstappen tied in the drivers standings at 369.5 points. With Red Bull Honda’s Sergio Perez suffering a DNF, it looks like Mercedes is set to clinch its eighth constructors title on the bounce.

It was a difficult run of results for Carlin’s Jehan Daruvala at the penultimate round of the season at Jeddah, with luck simply not being on his side all weekend. Qualifying in 11th place for the first sprint race, the Red Bull junior driver managed a strong comeback to fifth place, but a post-race five-second time penalty dropped him down to 10th place.

The second sprint race had Daruvala finish second on the road, but another five-second time penalty dropped him to 14th position. Despite the feature race being abruptly suspended, Daruvala recovered to ninth, but red flag rules dropped him to 11th place once again. The Indian driver will be looking to finish off the season on a positive note at Abu Dhabi.

Formula E’s focus is well and truly now on the upcoming 2022 season with preseason testing taking place at Valencia. It had Envision Racing’s Robin Frijns top Day 1, with the Mercedes of Stoffel Vandoorne fastests on Day 2. Venturi Racing’s Edoardo Mortara was quickest on the third and final day. The 2022 ABB FIA Formula E World Championship season kicks off at Diriyah, Saudi Arabia on January 28.

In just seven days, the 2021 Formula One and Formula 2 seasons will come to an end at the Yas Marina circuit in Abu Dhabi.