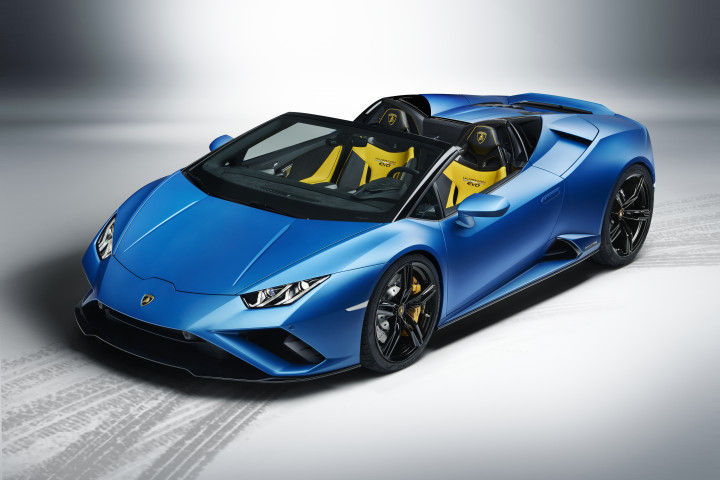 The rear-wheel-drive Huracan EVO is not only the most affordable version of the supercar but also the one to pick if you enjoy driving. Thanks to the omission of AWD, the RWD version is lighter, cheaper, and also more tail-happy. Although subjective, we think the RWD EVO is the cleanest-looking Huracan version you can buy today. Meanwhile, Lamborghini has decided to step up the supercar game and is offering the RWD EVO Spyder.

The highlight is obviously the fabric soft-top which can operate in 17 seconds at speeds of up to 50 kmph so you can listen to that glorious naturally aspirated 5.2-litre V10. The output figures are rated at 610PS and 560Nm, hooked to a 7-speed DCT gearbox. The convertible weighs in at 1,509kg. For perspective, the Huracan EVO with the AWD powertrain weighs 1,542kg but the Huracan EVO RWD coupe is light at 1,389kg. So, the convertible version is 120kg heavier than its coupe counterpart.

Moving on to the numbers, thanks to the weight-to-power ratio of 2.47 kg/ps, the Huracan EVO RWD Spyder can sprint to 100kmph in 3.5 seconds (3.3 seconds for the coupe) along with a top speed of 324kmph. Cosmetically, what differentiates the RWD variants are the different bumpers and alloy wheels. In this case, Lamborghini has used 19-inch Kari rims with Pirelli P Zero tyres, as well as optional 20-inch rims and carbon-ceramic brakes. The Huracan EVO RWD Spyder also gets a unique diffuser for the rear bumper.

The cabin is identical to the coupe version with the highlights being the 8.4-inch touchscreen and ANIMA controls on the steering wheel for Strada, Corsa and Sport driving modes. The infotainment system also supports Apple CarPlay and Amazon Alexa voice recognition. The standard Huracan EVO RWD is priced at Rs 3.22 crore, making it more affordable than its AWD sibling by Rs 50 lakh. We are yet to hear from Lamborghini on its plans to launch the Huracan EVO RWD Spyder. It is currently priced at USD 229,428 (Rs 1.73 crore excluding taxes).

The Huracan EVO RWD is an outright driver's car. It’s 150kgs lighter and 30 per cent more oversteery than the AWD version. Of course, the AWD variants are the cream of the lot here but if you love to drive and have a laugh behind the wheel, the RWD EVO sounds just right. Now with the addition of the Spyder version, there is one more solid reason to suggest one. We wonder, who could possibly say no to an open-top wind-in-your-hair experience with the V10 screaming at you?