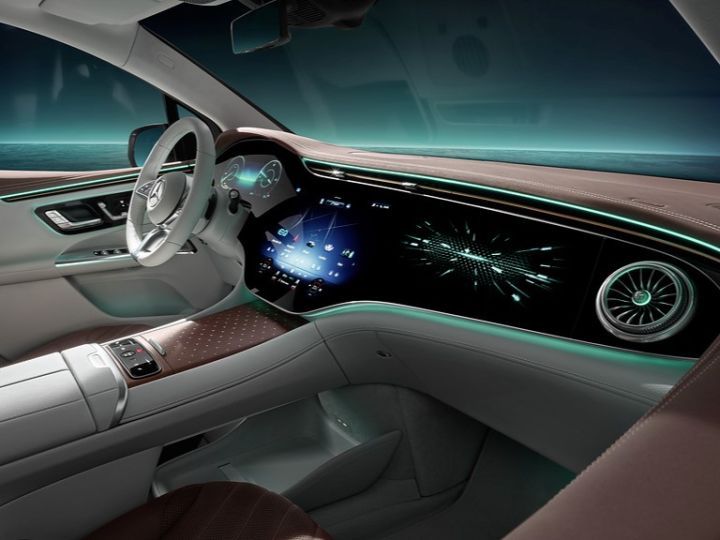 Mercedes has given us a first look at its upcoming EQE electric SUV’s cabin. The luxurious 5-seater SUV will be unveiled on October 16, and will slot in-between the EQC and EQS SUVs in the carmaker’s electric vehicle (EV) lineup.

The MBUX Hyperscreen will be available as an option on the EQE SUV. It comprises three high-resolution displays that take up the entire dashboard and which can be used to control all the functionalities in the vehicle, including the HVAC controls.

Overall, the design and layout of the cabin is similar to the EQE sedan. But the SUV’s cabin is likely to be larger and according to Mercedes, the EQE will be one of the most spacious SUVs in its class.

Aluminium- and wood-finish interior trim pieces lend an airy theme to the EQE’s cabin. Similar to the existing GLE, it’ll be a 5-seater SUV, but a third row could be offered as an option or as standard on some trim levels alone.

We expect the EQE SUV to be offered with all-wheel drive powertrain options. The EQE sedan gets a 90.5kWh battery pack that could be shared with the SUV as well. Expect the range to be in the ballpark of 400 to 500km.

The EQE SUV should offer a peak charging rate of 170kW, at which rate the battery can be charged in 32 minutes.

Multi-purpose variant of the #EQE: The #EQESUV is one of the most spacious representatives of its class in terms of headroom, legroom and elbow width and will celebrate its world premiere on October 16, 2022. Get a first glimpse of the EQE SUV's interior: https://t.co/22syG6Lh07 pic.twitter.com/faEq09CI0d

The Mercedes EQE SUV is expected to be launched globally and will likely make it to India by mid-2023. Similar to the upcoming EQS electric sedan, the EQE SUV could also be assembled locally.