Royal Enfield: Tour of the Rann of Kutch

Here's the problem you see... I love telling tales, not tall ones but definitely long ones, and a couple of pages are hardly enough to narrate the entire mind blowing experience that was Royal Enfield's Tour of Rann of Kutch. Even narrowing down to a few memorable experiences is going to be a tough act, but here goes anyway. 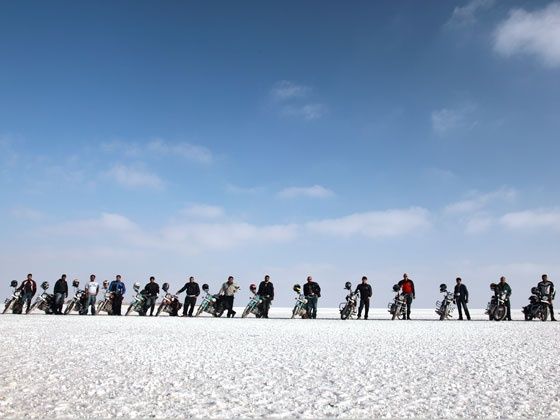 Now the last time I 'got my motor running and headed out on the highway' on a Royal Enfield motorcycle was when I rode to Leh last June as part of the company's annual pilgrimage to the mountains known as the Himalayan Odyssey. Being the life changing experience that was, naturally some parallels to that ride will be drawn. But it was clear right off the bat that this wasn't going to be your standard Royal Enfield ride, if their rides can ever be called 'standard' in any way. The first clue was the size of the group, which was tiny by Himalayan Odyssey standards - less than one-fourth of Odyssey group. The second was when the planning of the route seemed to happen immediately after the briefing, the very night before the ride was to start. So there it was - fifteen riders on a variety of Royal Enfield motorcycles ranging from the age-old Bullet 350 to the very latest Classic 500 EFI heading into the Rann of Kutch, a place which was under the sea a couple of thousand years back, not knowing what kind of adventure waited for them hardly half a day's ride from their starting point in Ahmedabad.

Of starry nights and Wild Asses

Before you start jumping to conclusions, let me just explain that a Wild Ass is a donkey-like animal indigenous to the Rann and locally known as a Khur. Now since that's out of the way, our first destination was the Little Rann of Kutch - a large dry lake bed spanning about 100km across riddled with swamp marshes all over. Now there are many roads around the Little Rann, but KD, our fearless leader from Royal Enfield had some other plans for us. As soon as we were done with the lunch stop at Dasada, we left the comfort of paved tarmac behind and headed straight for the Rann, crossing whatever obstacles came our way - from sandy paths, to farms, embankments, marshes and even a couple of water crossings, one of which yours truly ended up inspecting up close... face first! But after the initial fear of riding over unpredictable surfaces was overcome, there was a strange satisfaction in simply picking a direction rather than a route and heading off into the unknown. And it was doubly rewarding when we finally entered the Little Rann past sunset and spent hours riding behind the support jeep in order to get to a temple in the middle of the vastness (our halt for the night) with only the stars for guidance. While most of the riders huddled in the temple for a good night's sleep, a few of us more adventurous types decided to camp out a couple of kilometers away from the temple, literally in the middle of nowhere, armed only with our bikes, our sleeping bags and millions and millions of stars for company.

It was only the following morning, when the inky black of the night was replaced by bright sunlight, did we realize just how vast the Rann the really was. The surface of the dried lake extended as far as the eye could see, broken only by a few truck tracks here and there, meeting with the sky in the flattest horizon I had ever seen in my life. Over a dozen Royal Enfields spread out wide abreast, thundering over the flat terrain... it was really a sight to behold. And against all odds, we encountered a pack of Wild Asses and a high speed (with speeds touching almost 70km/h) chase ensued with the bikes close at their heels, a sight which looked like it came straight out of some show on National Geographic.

Ancient civilizations on the great white

After spending the entire morning riding on the dirt (and occasionally clay) of the Little Rann, most of the riders had found their off-road legs. But we had crossed the width of the Rann by afternoon and had to sadly we had to leave all that playing in the dirt behind and get back to the sanity of smooth tarmac. Our destination; Dholavira, an excavation site of a town dating back to the Harappan Civilization era. The paved road did provide a few (pleasant) surprises like steep dips coming out of which the bikes would wheelie at speeds over 100km/h and tight twists and turns where the footpegs would scrape. En route was the first time we actually caught a glimpse of the Greater Rann of Kutch - an unending expanse of salt as we crossed through a small section of it over a land bridge. We reached Dholavira about an hour before sundown, quickly got rid of most of our heavy gear and luggage and rushed off to the dig site. Almost like another scene from Discovery Channel itself, ruins of a citadel, houses, streets, and an advanced water conservation system of channels and reservoirs from the ancient city of Dholavira lay before us - all of which was constructed about five thousand years ago - thousands of years before the events described in epics like the Ramayana and Mahabharata took place! A little ridge on the side of the excavation provided a brilliant view of the Greater Rann once again, this time with the backdrop of a beautiful sunset.

A sea of salt

The next day, on the way back from Dholavira, KD took the first opportunity to lead the riders into the Greater Rann - a place unlike anything we had seen before in our lives - a thick layer of moist salt extending till the horizon, flatter than a pancake, and riddled with pockets of watery marsh and sticky clay. After venturing a couple of kilometers in though, we decided to call it quits as the bikes started to bog down and going any further would risk the bikes sinking in and getting stuck. Further down the road, we found another entry into the Greater Rann, but this time the surface was far more precarious with infinite number of ruts in the salt caused by villagers crossing the Rann at early hours. Then, it was off to Bhuj to get permits to ride further into Kutch where we made it in the nick of time before the DSP office closed. Bikes serviced at a local Royal Enfield dealer and a late night ride to our next halt at Nakhatrana ensued.

The taste of Kutch

A lazy morning start, a fun ride on some back roads and then an arrow straight highway surrounded by the desert got us to Kala Dungar (Black Hill), a rocky outcrop which offers a breathtaking view of the expanse of the Rann of Kutch and from which, on a good day, one can even catch a glimpse of the Indo-Pak border, barely over thirty kilometers away. Back down the hill, the riders went up to India Bridge on the road going towards the border, but couldn't go further as the area is under strict BSF control. A lunch stop at a charming little Kutchi village to sample the local cuisine, and it was straight to Mandvi where a ride on the beach sand amongst gigantic windmills brought a pleasing end to the day. The next day, the route back brought with it the longest distance we had covered on the entire ride - some 300km back to Adesar, the same town we had stopped when we first crossed through Little Rann. A major breakdown just as we left Mandvi meant that we would be crossing the Little Rann in darkness again and this time, we would have to get all the way across to reach our destination for the night. Confidence and spirits were high as, by now riding off-road had become second nature for most. Still, the Rann isn't a forgiving place and lured a few riders into the sticky clay patches in which the bikes promptly got stuck. But our adventurers, lending a helping hand to each other, got the bikes out and had a fun time at it as well. So it was almost a couple of hours past midnight when we finally made it to our last overnight halt at Dasada on the other side. The route back to Ahmedabad was short and a post lunch start took us to Nalsarovar - a huge marshy lake inhabited by thousands of migratory birds. A relaxing boat ride watching the sunset and the birds and an easy ride back to the hotel in Ahmedabad provided a perfect anticlimax for a grand adventure that was the Royal Enfield's Tour of Rann of Kutch.

There are many places one can go in India to have a memorable motorcycle ride, but the Rann of Kutch provided something more. Sure, a ride to the Himalayas is a more moving, spiritual experience. But the bottom line is hundreds, if not thousands, of motorcyclists do it every year. Riding in the Rann of Kutch, all alone, venturing into the unknown, not a soul around for kilometers and kilometers, over terrain that would make even a veteran rider think twice - it was a real adventure. And one that will stay with us for years to come.