The Monster 797 is here to tempt not-so-experienced riders to become a part of the Ducati way of super biking. The 797 does look like a proper Monster despite being the most affordable one. It's time to find out whether it truly feels like one or not 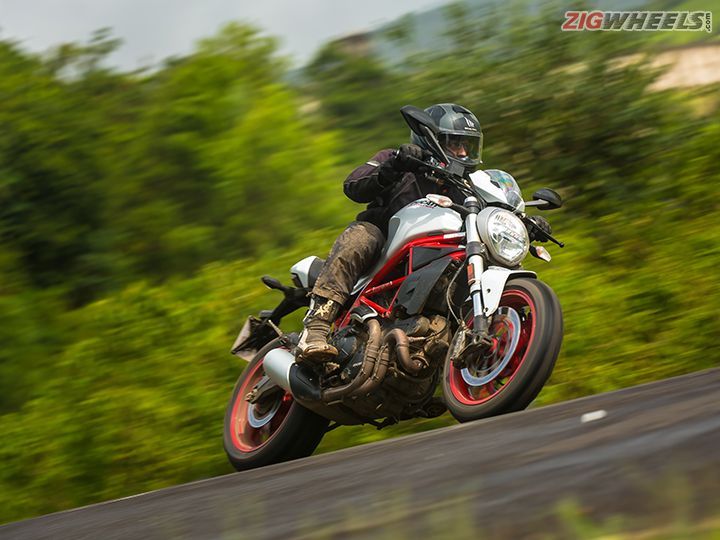 We bet you have felt excited about riding a big bike. Intimidated? Yes, that too. Motorcycle manufacturers across the globe understand this and are keen to build motorcycles that won’t scare riders away. These motorcycles also promise to be better to live with. Ducati, in line with the same promise, has introduced the Monster 797 with a target of tapping into a wider spectrum of riders. Even though the 797 is a new entrant, its engine, first seen in the 795 and 796, has been around in the market for quite some time. In fact, the same has now guised itself in the face of a Scrambler. That said, the engine now has been re-tuned to suit its naked character. What remains to be seen though is that if this baby Monster still has the fun factor that Ducatis are known for. And, has it actually been domesticated enough to use every day in Indian cities at the hands of newer riders? Let's find out!

In terms of styling, the Monster 797 is a proper street naked that looks masculine. This naked stays true to its DNA, as far as aesthetics are concerned, and you can't help but notice numerous eyeballs going gaga at the bike as you wander around in the city. The chunky fuel tank, the trellis frame, the oval headlight with DRLs and the bulging exhaust pipes, everything echoes of Ducati’s signature Monster styling. To keep the costs in check, the M797 comes with double-sided swingarm, unlike the 821, which sported a single-sided swingarm.

The Monster 797 gets the same white backlit instrument console that the bigger Monsters get. Readouts are clearly legible, and even though there is a low-fuel alert lamp, the fuel meter and gear shift indicator are sorely missed. The headlight lightens up the dark fairly well by providing a concentrated focus instead of a wide spread. The switchgear quality on the fairly straight handlebar feels rich, with all the switches working well. However, we would have liked to see the switchgear from the 821 here as well.

Paint quality is at par with the best in the segment and we really liked the white and red paint scheme on our bike. Build quality and fit finish is also at par with our expectations from Ducati, and the same is reaffirmed by the finish of welded points on the chassis and also by how neatly the elements like the tank, the key section and the saddle are stacked together.

This Ducati features an air-cooled, 803cc motor. It only makes 74PS at 8250rpm and does so in a gentle way as the power delivery feels smooth, friendly and accessible. Peak torque of 67Nm comes in at 5750rpm. But the torque band is so well spread out that you don’t have to rev the M797 a lot. The bike seems to run out of steam at the top though, but in the midrange, which is around 4000rpm, it has enough torque to bring that ear-to-ear grin on your face.

Cutting costs here as well, Ducati has let go off the riding modes and traction control settings, something that its arch rival, the Triumph Street Triple S gets. Basically, the baby Monster is just a good old-fashioned, air-cooled motor with plenty of roll-on torque. Speaking of which, the L-twin motor gets shorter gearing and the same was apparent during roll-on acceleration, wherein the bike took 3.18 seconds to manage 30-70kmph in 3rd gear, followed by 4th gear acceleration from 40-80kmph in 3.63 seconds, making overtaking a breeze without having to shift down a lot.

The motor is mated to a six-speed gearbox that shifts smoothly. Finding neutral though is a task, even at a standstill. The clutch comes with APTC (Adler Power Torque Plate Clutch), to stop the rear wheel from locking while downshifting and also to reduce the pull effort of the clutch, making it light enough to use with just two fingers. This makes the M797 a boon to take on the city tantrums, where the engine generates a lot of heat, which is clearly felt on the thighs.

The bike manages to clock 60kmph in 2.46 seconds while 0-100kmph is achieved in 4.94 seconds, which is quite commendable considering the M797 weighs 193kg (kerb weight). The Monster loses out some more brownie points by giving the windshield a miss (the one on our test bike is an accessory), which makes its absence felt at high speeds. We managed to pull the bike up to a true top speed of 158.2kmph before the wind blast started taking a toll on us.

Throttle feels snappy, a bit more compared to other Ducatis, considering that is a trait most commonly found in all the bikes made by this Italian giant. It's a fun to ride motorcycle as the power delivery isn't very intimidating. Manage to keep the bike at around 4000rpm, and you shall get to experience an almost vibe free ride. However, it is beyond 6000rpm that the vibes start to creep in through the handlebar and footpegs,  and it only gets worse as your speed starts to climb up.

The exhaust note seems to be toned down by Euro 4 norms, but it still sounds like a proper Ducati; so much so, that if it rode past you, you wouldn’t even confuse it for anything else, even with that slightly muted tone.

The handlebar is wide and almost flat, making the rider lean in a fair bit, but without much stress on the wrists and shoulders. Footpegs are rear set and the lower body sits in a more aggressive position compared to the upper body. Overall, the ergonomics are comfortable enough for short stints.

The seat height on the 797 is 805mm, which is only 15mm higher than the Scrambler, making it easy for riders that are even as tall as 5.5 feet, to get astride. Seat cushioning is comfortable enough for city runs and good enough for one to cover a distance of about 70-80 kilometres without any stops. As stated above, the Monster weighs in at 193kg but doesn’t feel as heavy while riding. In fact, the bike feels nimble and easily flickable in traffic conditions. The turning radius is immensely wide though and making short turns or even quick U-turns can become cumbersome. While the front suspension isn't adjustable, the rear gets pre-load and rebound adjustment.

With the standard setting that we received the bike in, damping felt good enough to soak in bumps and undulations at low speeds but once you get going, the suspension picked up even the slightest of undulations on the highways.

There is ample grip on offer from the tyres, inspiring significant confidence even while cornering hard. The grip was firm even in wet conditions. Speaking of corners, the bike handles them with ease. The mass is concentrated more towards the centre due to which the steering feels light, so the bike feels more in control and dives into corners willingly. The chassis feels agile as well, which enables you to hold the line firmly as you ride through the corner. Tipping the bike into the next corner doesn’t take much effort either, thanks to the well-balanced weight distribution.

Brakes come with switchable ABS and the front provides a sharp bite. There’s not much feedback from the rear brake though. Under hard braking, ABS hardly makes its presence felt, which is a good thing, and the bike manages to stop from 80kmph in 32.22 metres while 60-0kmph takes 18.35 metres.

The low power figures have helped this Ducati in providing better efficiency numbers. We ran the baby Monster through our standard fuel test scenarios and the bike managed to return 17.7kmpl in the city, which went up to 21.8kmpl as we rode on the highways.

Ducati has managed to strike a good balance with the Monster 797. It may not have the high-end whack and excitement levels that some of its Japanese rivals showcase, but it generates power right where most new riders would use it.

It also manages to deliver the fun factor rather well without being too intimidating. Whether it's the perfect upgrade for a customer coming from a motorcycle like the 390 Duke is completely subjective. But it does come across as a great tool if you plan to do some canyon-carving over the weekends while also being able to ride it to the office on a daily basis.

Ducati also launched the 797+ in June 2018, which comes with the flyscreen and the rear seat cowl as standard. Oddly enough, the Italian two-wheeler manufacturer has managed to price the bike at Rs 8.03 lakhs, the exact same price as the Standard variant. Sounds like a pretty good deal, doesn’t it? So, if you’re looking to buy the entry-level Monster we’d suggest you go for the 797+ which gets the extra goodies for the same price.

Priced at Rs 8,05,000 (ex-showroom, Delhi), this isn’t a cheap Ducati, it’s just a more affordable one. So, would I buy one? Well, considering the asking price and options like the Triumph Street Triple S and the Kawasaki Z900, maybe not; especially since these two nakeds offer a lot more power and character, with a lot more geeky stuff, making them more value for the buck.