It loses one cup of displacement and some equipment, but does that make this the lesser Multi or the better Multi? 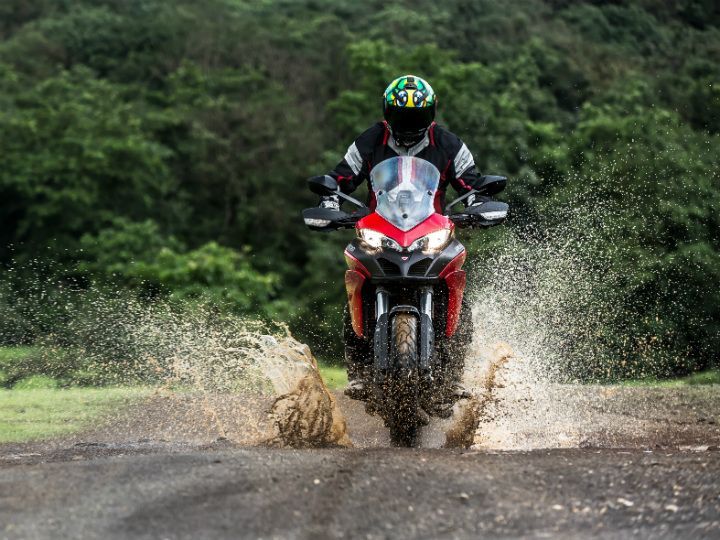 As a teenager I was an ardent admirer of superbikes, their sleek styling and supercar rivalling  performance figures made them ultra-desirable. As I grew older and a bit wiser, I understood that unless you have a racetrack these are not really usable. Now I realised that an adventure-tourer motorcycle made perfect sense for India as they are supremely comfortable and you can ride them wherever you want. The missing elements of performance and dynamics were brought into the segment by Ducati’s Multistrada. Yowza! You bet! Now, Ducati’s Multistrada 950 is  positioned as a more affordable version of Ducati’s continent hopping motorcycle, but does it have the zing and the flair to earn its own spot in the limelight next to its larger displacement sibling? Let’s find out

The new Multistrada 950’s styling is based on the Ducati Multistrada 1200 which isn’t a bad thing by any means. It is an imposing looking motorcycle with its large dimensions and sculpted lines. The face of the bike is dominating with beautifully sculpted headlamps above which sits a large windscreen. The beak shaped front apron is among the design highlights, while the long travel suspension and large 19-inch alloy wheels endow the bike with a menacing stance specially in the blood red shade.

The bike gets knuckle guard mounted LED turn indicators while the large tank flows fluently with the front-section. There are distinguishing elements on this bike in comparison to the Multistrada 1200, which includes slimmer exhaust muffler, larger 19-inch front wheel instead of a 17-inch, the black finish for the trellis frame, double sided swingarm and redesigned alloy wheels.

The bike sports an all-digital instrument console that is similar to the Multistrada 1200S but sadly it misses out on the TFT screen. The bike comes with a USB charging port and adjustable windscreen that can be altered on the go by 100mm. Overall fit and finish levels of the Ducati as expected at this price point is faultless.

The Ducati Hypermotard sourced L-Twin engine delivers 114.5PS at 9,000rpm and 96Nm of peak torque arrives at 7,750rpm (111.5PS and 95Nm on the Hypermotard). The bike comes with four riding modes - Sport, Touring, Urban and Enduro. In the first two modes, full power is on offer while the later two modes cuts it down to 76PS. All these modes come with pre set levels of traction control (8 level) and ABS (3 level) intervention and each of this can be altered individually  but the user interface to change the settings is a bit complicated.

As I exited the Ducati dealership in Mumbai, I was riding in Urban mode and the first thing that I noticed was that the throttle response was precise, but, not sharp. It surprised me further as the low-speed knocking associated with larger displacement Ducati’s was surprisingly well managed despite lacking the variable valve timing bnow offered on the 1200S. As expected the L-Twin motor did heat up a lot on the traffic clogged roads but it wasn’t scalding hot.

Once on the open highway, it was time to unleash all the Italian stallions that the motor was holding back, I rolled off the throttle and switched to Sport mode (ride modes can be altered on the go) and the bike just transformed. I was welcomed with ferocious acceleration and the throttle response was also much sharper. The Multistrada 950 felt like a true blue Ducati and it was gobbling speeds. Since I was in no hurry, I shifted to Touring mode and was greeted by much more gentle throttle response. As the name suggests is perfect for clocking miles in absolute harmony. The Ducati Multistrada 950 is a motorcycle that has been designed to munch miles and it does so at a blistering pace with a raw exhaust note for company.

I was trying to find its sweet spot of cruising and even at 150kmph with a hint of vibes, the bike felt unstrained! A strong bottom-end and mid-range punch allows you to just add a few mm of extra throttle to blast past traffic. In our roll-on test, it accelerated from 40-80kmph in 3.79 seconds while the 0-100kmph run was dismissed in 4.11 seconds, which is impressive given the weight of the bike. Enduro mode cuts down the electronic intervention to the bare minimum.

We didn’t delve much into this mode as the 950 wasn’t wearing the Enduro pack and so we kept  the road biased Pirelli Scorpion Trail II tyres on the black stuff. The 6-speed gearbox performed well and the gear ratios have been well spread out. Clutch, though, is on the heavier side which does make riding the bike in city traffic a bit tedious. Also given the speeds the Multistrada 950 can achieve, cruise control should have been offered. Since there is no Inertia Measurement Unit (IMU) like the 1200S, the bike doesn’t get cornering ABS.

The Ducati Multistrada 950 returned us 14.87kmpl in the traffic choked streets of Mumbai and when we took it on the open highway, the mileage figure rose to 25.57kmpl which is really impressive given the displacement of the motor. The 20 litre fuel tank capacity means that the Multistrada 950 will have a real world range of over 400km which is beneficial while touring.

Get on the saddle and the 840mm seat height makes its presence felt immediately. I am 5ft 10inches tall and I couldn’t plant both my feet on the ground. Flat bars, centre-set pegs and generous saddle space means that the Multistrada 950 offers a comfortable riding posture, though I felt the bars were slightly tall for my liking. Since you sit high, one gets a commanding view from the motorcycle and such is the presence of the Ducati that many cars switched lanes to let me pass! Despite its huge dimensions, the Multistrada 950 was rather easy to ride in traffic while I was doing the city mileage run.

Taking U-Turn takes some getting used to as the front does feel a bit heavy at slow speeds. 229kg kerb weight means, that pushing the bike out of parking will require some muscle and effort. The bike employs a tubular trellis frame that is suspended on adjustable USD forks at front and a monoshcok unit at the back. Talking about handling dynamics, it took on the sweeping roads on our way to Mulshi on the outskirts of Pune with gutso. It tips into corner easily and holds the line well too and given the large suspension travel doesn’t get unsettled over mid-corner undulations. However, quick direction changes along with elevation changes the front feel a bit flighty as it was on the softer side. So through these rapid direction changes it felt as though you were hustling the Multi a bit. This is where the brilliance of the Ducati Skyhook Suspension (DSS) is missed.

We rode the Multistrada 950 over some really bad section of tarmac and the Ducati glided over them without breaking a sweat. The mismatch between the front and rear setup on our test bike was evident here as the rear let more of the road surface come through to your bottom. A few fine tweaks to the adjustable suspension at the service center should sort the issue out. Standing on the bike is also easy as you can lock the tank between your knees easily and the wide handlebar is easy to steer. The large 320mm dia front discs are clamped by Brembo monoblock callipers and a 265mm dia disc unit does duty at rear. The brakes shed speed with authority but fork dive under hard braking can be a bit unnerving. In our braking test, the Multistrada 950 took 44.57 metres and 4.24 seconds to come to standstill from 100kmph.

The Ducati Multistrada 950 is a very impressive motorcycle. Its ability to cover large distances, and the firepower on tap make it an able machine to cruise down the highways effortlessly. And, if you encounter some rough patches in your journey, all you need to do is stand and open the throttle. The ride modes endow the Multistrada 950 with a multiple personality depending on your need while the safety net of traction control and ABS will watch your back.

Yes, the lack of an IMU and the missing Skyhook suspension could be considered as hiccups, but the above have been skipped to keep the cost under check and at Rs 12.82 lakh (ex-showroom, pan India), the Multistrada 950 is almost Rs 5 lakh cheaper than the 1200S. The only serious issue could be the 840mm seat height, especially for shorter riders. Aside from that, the Multistrada 950 delivers all that is expected from an adventure tourer and if you’re a Ducati loyalist and felt the Multistrada 1200S was out of your budget, this makes for a credible and thoroughly enjoyable new option. 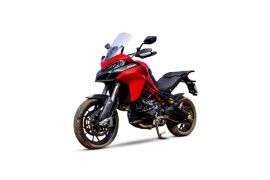 All Comparisons of Multistrada 950