Triumph has given the baby scrambler more power, new rider modes and better braking. How different is the riding experience now? 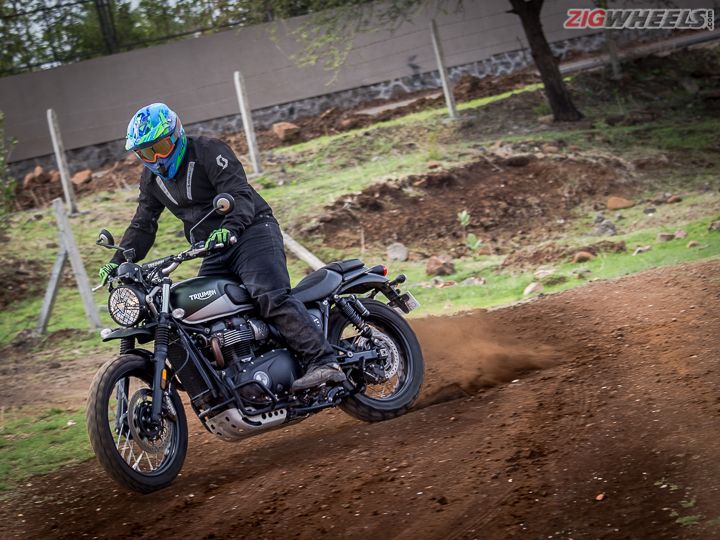 It might not be big and brutish like its elder sibling, the Scrambler 1200 XC, but Triumph’s small Street Scrambler does offer a more cost effective and easier alternative for your scrambling needs. It received a midlife update at the start of this year with subtle visual tweaks, better components and more power. Do these updates make the small scrambler a better package?

Off-road mode
Triumph has retained most of the tasty bits like bottom-heavy torquey engine, spoke rims, wide handle-bars that made the previous iteration of the bike so enjoyable. What it has added to the mix is riding modes. There are three modes -- Rain, Road and Off-Road. In the latter one, ABS and TC are switched off so that you can enjoy a day of mucking about. But in order to engage this mode, you do have to come to a standstill with the bike in neutral.

Once you set off on the trail, it feels light on its feet with enough torque on tap to clear the obstacles in your path. The wide handlebars offer great leverage. We would have liked to see a bit more crash protection on the stock bike as all the safety kit on our test bike, such as the aluminium bash-plate, handlebar brace, engine crankcase protection and other whatnots, are optional accessories fitted on by Triumph.

Do not expect it to take on mighty boulders and perform massive jumps as there is only limited suspension travel, 120mm at the front to be precise. When going over the grueling bits, the new 41mm KYB front suspension unit felt a bit too firmly sprung. Thankfully, the rear end was pretty settled courtesy the aftermarket adjustable Fox RSUs that came on our test bike. One can tune these units for compression and preload. These cost around Rs 65,000, but are definitely worth considering when picking up the bike. We did fiddle around with it a bit to get the right setting for road as well as off-road and it was super easy to find it too.

At the time of testing the Street Scrambler, Pune was facing light spells of rain. This meant our off-road test location was packed with muck. As a result, the sheet of hard-packed mud quickly layered up on the dual-purpose Metzeler Tourance rubber - a bit like ice-skating with sneakers.

Although this might not be an issue post monsoons, what does cause discomfort is the side-swept scrambler-style exhaust. No, it didn’t scald my thigh or roast my calf muscle, what it did was not allow me to grip the bike while standing on the pegs. The narrow seat dimensions as well as the fuel tank’s converging shape also add to the problem. I was left gripping the bike with my calves which is a difficult task.

Easy rider
The Street Scrambler shares its foundations with the Street Twin. Majority of parts are shared between the two bikes and that includes the double-cradle frame. Since the Scrambler has different sized wheels (19/17-inch spokes vs 18/17-inch alloys on the ’Twin), a different exhaust layout and slightly different rear-subframe, it is 5kg heavier. However, it feels like the easier to manage of the two, thanks to its wide handlebars. The effort required in switching from one corner to the next is considerably less and flitting through traffic is easier on the Scrambler too. Surprising, right?

At traffic signals, you do feel the heat, thanks to the exhaust. But the 900HT motor on this bike does not affect you as severely as it does on the Street Twin, since you are not seated close to the cylinder heads. In fact, of the two motorcycles, I found this to be the more enjoyable one to ride.

With the revised engine tuning, the 900cc parallel-twin High Torque motor makes more power than before (10PS to be precise). The torque-band is wider too. This holds true for the Street Twin as well, but on this bike, the engine is tuned slightly differently with different power and torque curves. It makes the peak torque of 80Nm at 3200rpm, 600rpm lower than the Street Twin. Primarily, this should help it while off-roading, but it also makes a difference on the road.

There is extra drive at lower revs on the Scrambler which allows you to potter around town at around 40-45kmph in fifth. The Street Twin would have struggled at those speeds, only showing signs of relief above 50kmph. Cruising at 100kmph is done at 3100rpm, which is 100rpm lower than the Street Twin. Hence, the Street Scrambler manages to churn out better fuel efficiency figures - 26.05kmpl in the city and 28.17kmpl on the highway, 2kmpl more in both conditions.

While it might not show in the outright acceleration figures, it is the roll-ons where the Scrambler is a bit sluggish. Extra weight could be one of the reasons why it posts slower times. The flatter torque curve on the Scrambler also plays its part in this test.

As I mentioned previously, we did encounter rain on the test. However, we were more than happy to keep the bike in the Road riding mode. Switching it into Rain waters down the throttle response significantly, with frequent traction control intervention. Unless the downpour is significant, we would suggest you stick to Road mode for most of your riding time.

Triumph has kitted out these two motorcycles with a new Brembo axially-mounted caliper on the front wheel with a Brembo radial master-cylinder. The two new bits inspire higher braking confidence on both motorcycles. Again, the surprising bit here is that the Scrambler manages to stop a few metres earlier. The retro-patterned Pirelli Sportcomp rubber on the ’Twin is perhaps the reason for this difference.

Better motorcycle, but not quite the package
At Rs 8.55 lakh (ex-showroom India), the new Street Scrambler is Rs 5000 cheaper than before (making its way down to India via the CBU route now). It is still Rs 1.10 lakh more than the Street Twin. It is still Rs 1.10 lakh more than the Street Twin. Plus when you consider that the extra goodies that Triumph has kitted our test bike out with (Fox RSUs, Vance & Hines slip-on exhaust, crash protection) are offered at a lakh and a half extra, the Street Scrambler comes across as quite pricey. Hence, as a motorcycle, it is definitely better than before but, on the whole, not as cost effective as you would’ve initially thought. Especially when Triumph sells the larger and purpose-built Scrambler 1200 XC at just Rs 2 lakh more than the base price of the Street Scrambler.