Here’s what the bikes from the entry-level Bonnie range are all about! 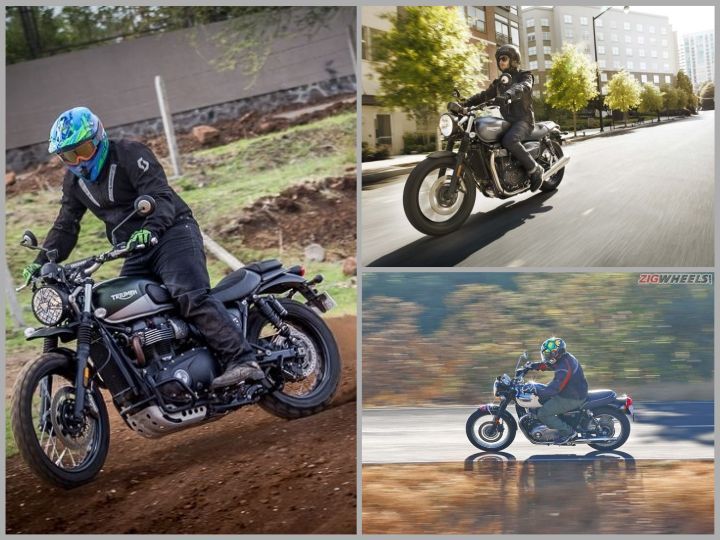 Triumph is renowned for its feature-laden motorcycles tempered with fine British engineering. The Bonneville 900cc family, in particular, is one of the most popular lineup of motorcycles from the brand as they offer a good balance of technology, design and performance. Here’s what all the bikes under this category are all about:

Starting at Rs 7.45 lakh (ex-showroom India), the Triumph Street Twin is the most affordable motorcycle from the brand. While the silhouette is unmistakably Bonneville, the bike gets a number of modern elements to suit the urban environment. The riding ergonomics is pretty upright with a hint of sportiness thanks to the slightly rear-set footpegs. This setup should make it comfortable for both city rides as well as highway jaunts.

For 2019, Triumph has updated the 900cc parallel-twin liquid-cooled engine with lighter internals. Consequently, it produces 65PS at 7500rpm, which is 10PS more than the previous-generation bike. The peak torque of 80Nm arrives 600rpm later, at 3800rpm. The engine works alongside a 5-speed transmission with assist and slipper clutch. Electronic aids include two riding modes: Road and Rain, and the bike gets a switchable traction control too.

The motorcycle features 41mm KYB fork and twin KYB pre-load adjustable shock absorbers at the rear. Brakes include Brembo four-piston calipers (instead of Nissin two-pot unit found in its predecessor) on the 310mm front disc. At the rear, however, the disc size has gone down from 255mm to 220mm. The Street Twin is essentially the least expensive ticket to the Triumph way of life.

The Triumph Bonneville T100 is essentially the modern iteration of the original Bonneville which was produced right from 1959, surviving numerous generation changes. Crucial design elements of the original bike such as the signature fuel tank, spoke wheels and pea-shooter exhausts have been retained to give that much-needed retro look. However, underneath all that vintage facade lies a modern 900cc parallel-twin liquid-cooled engine which is shared with the previous-gen Street Twin. It produces 55PS at 5750rpm and 76.73Nm at 3050rpm, and the engine is mated to a 5-speed transmission with slip-assist clutch.

Triumph has priced the bike at Rs 8.87 lakh (ex-showroom India). Overall, if you’re looking for a quintessential British retro-modern classic, the Bonneville T100 is the answer.

The Triumph Bonneville Street Scrambler is essentially an off-road friendly take on the Street Twin. The British bikemaker has equipped the motorcycle with a whole list of features to help it take on roads less travelled effortlessly. For starters, it gets a bigger 19-inch front and a smaller 17-inch rear spoke wheels shod with Metzeler Tourance dual-purpose tyres. At 120mm on both ends, the suspension travel remains the same as the Street Twin. The motorcycle comes with distinctive scrambler-style exhausts and a bash plate to protect the underbody while off-roading.

The engine is shared with the Street Twin and it makes the same power and torque as its urban cousin. However, the peak torque (80Nm) arrives in at 3200rpm instead of 3800rpm. To ensure proper offroading experience, the Street Scrambler gets an additional rider mode called Off-road mode apart from the Road and Rain modes. This mode switches off the traction control and ABS to let you slide around in the trails.