Porsche’s enigmatic 911 has gone for a thorough overhaul for 2019. How has it changed the 911 experience? 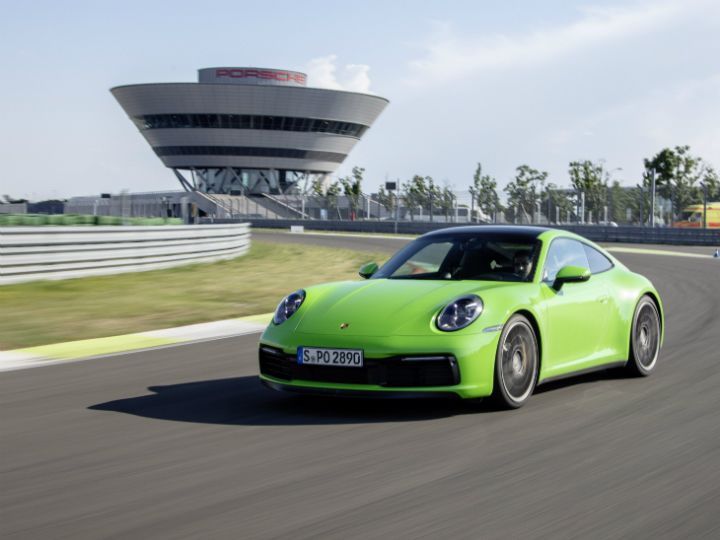 The cold science of the electronic wastegates, the asymmetric valve lift, the rear wheel steer and the cleverer-than-ever electronics crackle underneath. But your nerve endings fizz with the rasp of the engine, the fidgetiness of the chassis and the snappiness of the steering wheel. With Porsche’s new generation 992, will the 911’s fine and delicate cocktail of sensory inputs and robust ability move you ever more deeply and quickly?

The 911 is a towering personality built on Porsche’s promise of plugging the driver right into the beating heart of a laser-focused machine. The white-hot flame that Zuffenhausen instils in its icon has grown fiercer with every generation, only slightly disguised by the elegance of its gently evolving form and its ever-widening range of abilities. For the 8th generation, Porsche is making many changes which promise to make the 911...

Let’s go to the one angle everyone will be able to recognise the new 911 as new from: the rear. The 1.6-metre long LED ribbon that links the tail lamps is easy to spot and appreciate. It seems to be a natural extension of the sharply cut tail lamp that first graced the 991. You can thank Michael Mauer for that. His hand-sketched the lines that you see here and on the generation preceding it. Now, with the benefit of hindsight, you can see him completing what he started off with the 991.

Trivia lovers will love the new grille with the vertically oriented slats that sits below the rear windscreen. It boasts of two tall slats in the centre, flanked by nine slats on either side. Get it? Nine-Eleven? You could also read it as nine-nine-two. Cool, huh?

From the sides, there’s little to tell that this is indeed new, except for the sharper door handles. Even the wheelbase remains the same. But the 992 looks more purposeful and Porsche buffs will immediately point to the wide-body design, which for the first time is standard even on the more ordinary Carreras. Everyone else will murmur that the Carrera S looks more sensuous now and that’s also backed by a wider track front and rear -- 46mm and 39mm -- respectively.

Interestingly this is also accompanied by another first: the use of mixed wheel sizes on even the standard cars. The Carrera S that we drove wore 20” wheels up front and 21” wheels at the rear. This was a feature that Porsche previously reserved for the keener GT-badged cars.

Most people’s introduction to the 992 is likely to be watching its face grow larger in their rearview mirrors. The new layout for the headlamps (Porsche Dynamic Light System Plus, in the case of our test car) held firmly by the four LED DRL units will be easy to spot, but the other design changes will be hard to catch in such a moment. Luckily, our meet up was a leisurely one and the new 992 caused some sparks to fly in this enthusiast’s being.

By no means am I a Porsche heritage expert, but in the one-on-one time we had with it, a sense that the 992 looks more masculine and classical grew on me considerably. The line for the fender is more angular, as are the air dams, and the hood stretches further down on the longer nose (overall length has increased by 20mm), which gives it a squarer look. When you combine all of that with the scooped out section of the hood that runs from the base of the windscreen, it just connects it to the 912 of the 70s with subtlety and surety. It seems that Herr Michael had a solid plan in place more than a decade ago!

No matter which side of the Serious Enthusiast line you stand on, you will agree that the cabin looks ascetic in a cool kind of way. The classic flashback continues with the slim and minimalistic dashboard design.

The 10.9” screen sits cozily above a narrow shelf that splits the dash horizontally. A set of toggles, including the frequently used controls for the suspension modes and traction controls, continue the downward flow of the centre console.

What will catch your eye and perplex you right away is the tiny gear selector. It has been called many things, including an electric razor. Which is not inaccurate. But that isn’t the highlight.

Sitting behind the wheel is the five-gauge instrument cluster. The dials do not squish into each other anymore, instead fanning out to create a wide cluster! While this design looks properly retro, functionally, the outer dials tend to get hidden by the steering wheel rim. But you easily feel at home in the cabin. The seating position and the optional adaptive sports seats, as expected, are spot on.

The steering wheel, though, felt a bit bland thanks to the abundance of matte black plastic. And the sense of richness in the cabin seems to have been turned down a couple of notches. But, surely you could spec your 911 to inspire a greater sense of grandeur. And if you want to inspire the next generation with the magic of a flat-six motor, the 911’s rear seats are still in place, though best reserved for the smaller members of the family.

This 911 feels hungrier than before, and more civil too. The intuitiveness of the throttle, the corresponding lusty thrust from the motor, the playfulness of the rear end as the power streams out to the tarmac and the quickness of the front to attack a corner is mesmerising. Balancing the 911 on the throttle around a corner shows the skill and dexterity of the twin-turbo flat-six engine in delivering its 530Nm of torque with precision. You wouldn’t know it but the turbos are laid out more efficiently: the slow paths to the intercoolers which sit under the rear grille are shorter, the electronic wastegates more alert, and the stepped lift for the valves (2.5mm on one valve versus 4mm on the other, in the same cylinder) at lower revs are all making it happen.

The sheer creaminess and hunger with which it storms down the next stretch of highway makes the 30 PS bump up in power to 450 and the 0.4-second advantage (in case of the Sport Chrono Pack equipped versions, 0.6 seconds) in the 0-100kmph over the outgoing car is purely academic. The larger turbos and new piezo injectors power the performance gains. The rasp of the engine, still clearly heard in the cabin despite the turbos, makes it feel satisfying. The new 8-speed dual-clutch gearbox is also to thank for this smoothness and alacrity. However, there was just the slightest hint of waiting between a pull at the paddle and the corresponding downshift. This difference, although negligible, is perceptible only because of the blazing fast 7-speed PDK that used to just rip through shifts. The extra gear also helps the 911 cruise more efficiently than before.

The refinement as you cruise or crawl makes it all the more gobsmacking. There’s also a Wet Mode as standard now. An acoustic sensor in the wheel arch, so that it isn’t as twitchy as the rain sensor for the wipers, identifies water on the road and advises the driver to use the Wet Mode. Once activated, it primes the stability management, raises the rear wing (above 90kmph) and softens throttle response for a surer footing.

As 911’s have done over the previous generations, the 992 is more forgiving. Liftoff mid-corner while pushing hard, a grave crime in a rear-engined machine like this, and you aren’t punished or admonished. Instead, you are nudged along and schooled in making better decisions. The discreet assistance of the rear-wheel steering (optional) to increase high-speed stability or low-speed agility and the wider repertoire of the retuned suspension increase its friendliness. Even highway stints are surprisingly supple and calm, even at autobahn-worthy speeds.

While the 911 is more welcoming to all drivers, it has also honed its art form further. The chassis whispers softly, encouraging and titillating you. The added fierceness of the front end as it turns in, the grip and composure from the wider and stiffer chassis as it settles into a corner, the downforce from the active rear wing, the more neutral balance from the mixed tyre sizes will have you plugged in and revelling in every twitch, jink and slide. While the ever more muted electric steering will give rise to some wistfulness, there is still so much to enjoy here that the moments shall pass rapidly.

Better. It is a tame, ill-fitting, almost impotent word to encapsulate the phenomenal journey of the 911. But it has, and it does. The 992 takes the lofty benchmarks of the 911 family and raises them further. Subtly and surely, it has become better in almost every way. More comfortable, more potent and more apt for everything you might want to throw at it. The 40mm lift feature for the front axle, handy for Indian roads, should not be forgotten. We even got to test the ability of the run-flat tyres in case of a puncture and it did much to allay our concerns regarding the absence of a spare wheel. There’s more equipment and safety too. All of which comes in at a price that is only slightly higher (Rs 8 - 10 lakh, a trifle, you’ll agree) than before, making the 911 a better buy. And, still, properly epic.