We’ve now driven both the petrol and diesel and manual and auto transmission variants of the Hyundai Venue. So which one is our favourite and which makes the most sense? 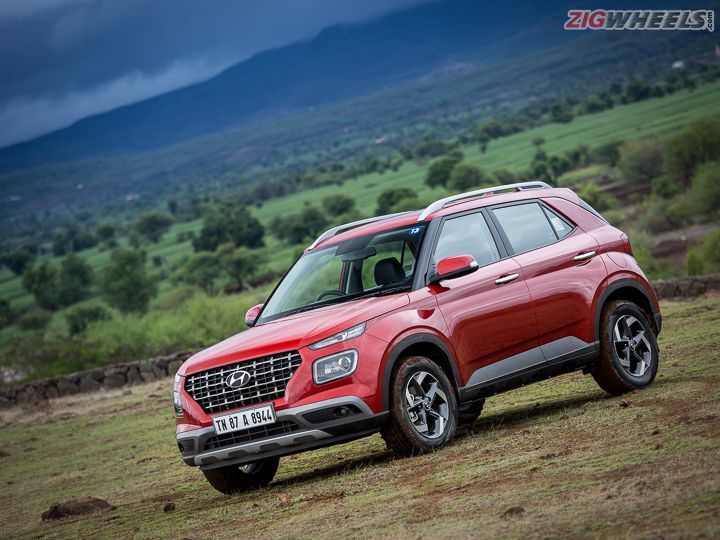 If the sales figures of July are anything to go by, Hyundai have managed to crack the small SUV code. And in July, the Maruti Brezza’s undefeated sales record finally tumbled afters years of dominance. So have 25,397 (total Venue sales) customers made the right decision? After road testing both the diesel and petrol (both manual and auto as well) versions we can tell you with complete certainty whether or not you should follow the crowd.

A good start
In designing the Venue Hyundai seems to have taken a balanced approach. So it does feature the rather traditional SUV shape with a flat bonnet and boxy lines but with nice rounded edges that give it an almost friendly appearance. And while the shape is conventional the new DRL over headlight setup adds a very nice wow factor to the design as well. The rear is also fairly conventional but the crystalline effect in the taillights and the shape and placement of the rear fog lamps and their square shape add just enough to keep things interesting.

Though the Venue is shorter that the competition measurement-wise, it does make up for this lack in height with great road presence. The only real downside to its appearance is the familiarity that its popularity will inevitably bring.

The design on the inside is similarly a nice balance between contemporary and modern with a touch of minimalism added in to keep things looking clean. The trim is an all-black affair with the only relief coming in the form of an off-white headliner. The beauty of the dash layout lies in its simplicity which also allows the 8-inch touchscreen to take centrestage. And the touchscreen does everything to deserve the spotlight. There are also wow features like a wireless charger and air purifier.

Coming back to the touchscreen, the interface is simple and easy to use, with minimal layers to go through to change anything, and it’s quick and snappy too. There’s even a nice set of shortcut buttons to get to often used functions. The only complaint could be that the resolution is not the best out there.

Below this lies the three dials for the climate control -- at least it looks like three dials. But it’s actually two dials on either side of a display. The dial on the right controls the blower and the one on the right controls the temperature, but these changes are displayed on the screen in the middle. The complaint we have is that this display is shaped like a dial and we kept turning this instead of the dials on the side when we wanted to adjust the temperature, and it does take some getting used to before we got the hang of it.

There’s reasonable storage options in the front and the Venue does carry 1-ltr bottles in all four doors but we do wish there could have been a few more storage options on the top end car. This is because the wireless charger means the front storage space is reserved for your phone and the air purifier eats up one of the cup holders.

Blue Linked
A lot of the hype around the launch of the Venue was the new BlueLink connected tech that it debuted. This is quite a comprehensive SIM-based connected tech package that allows you to stay connected with the car through an app on your phone. This features geo-fencing, speed alerts, idle alerts and also keeps a record of trip data. It also allows some remote control functions like locking and unlocking the doors, starting the engine (only in the DTC equipped car) and also shows you the real time location and status of the door locks and if the engine is on or off.

The door unlock feature was put to the test when our photographer was out on shoot in a different city and we needed some equipment that was left in the car in Pune. The remote door unlock feature allowed our photographer to unlock the car in Pune remotely and then once we had retrieved said equipment, he could lock the car again. The engine start feature can also be used to run the AC to cool down the car on a hot day before you start a trip. Something that we plan to put to the test when the hot weather returns.

There’s also direct access to road side assistance which sends a call to a call centre directly through the car’s system and allows you to report an emergency, request emergency assistance or even something trivial like finding the nearest rest stop, fuel station or even the closest Italian restaurant.

Performance with options
Hyundai have given Venue buyers the option of three engines - two petrols and one diesel. The 1.2-litre petrol and the 1.4 litre diesel are quite familiar and we’ve seen them in cars like the Elite i20 and the Grand i10 in the past. The 1.0 litre turbo petrol is new though and comes with the option of both a 6-speed manual as well as a 7-speed. We’ve managed to drive both the new turbo petrol and diesel engines extensively and here’s what we found.

The diesel is the very friendly and familiar engine that’s a brilliant townie. Its power delivery is quite gentle but smooth and allows for effortless progress. The 6-speed manual gearbox has short throws and shifts are precise and reasonably smooth. Out on the highway it’s similarly relaxed, with the engine just ticking over at a leisurely 1900rpm at 100kmph. Power output is 90PS@4000rpm and 220Nm1500-2750rpm. In our tests it managed the 0-100 sprint in 12.49s and in our efficiency tests it returned 18.95kmpl in the city and 19.91kmpl on the highway run.

While the engine stays nice and calm in most situations, when you do step on the throttle the 1.4-litre wakes up quite nicely and likes to rev in an almost petrol-like fashion. If you’re in the mood for some spirited driving it’s more than happy to comply.

The 1.0-litre petrol is a different beast that’s refined and surprisingly linear for a turbo. There’s plenty of torque for driving around in the city, unlike Hyundai’s other NA petrols. Just make sure you keep the motor spinning above 2000rpm. That’s where the meat of the 172Nm of torque starts to really kick in. Power is an impressive 120PS@6000rpm and post the turbo kicking in, it spins up towards the 7000rpm redline in a very linear fashion. The 6-speed manual is slick shifting too and the reasonably wide ratios mean that you can happily sit in 3rd gear in the city.

A new 7-speed dual clutch automatic is the only automatic option for the Venue and it’s only available with the 1.0-litre petrol. This engine-transmission combination is very city-friendly. Shifts are smooth and are tuned for efficiency so it upshifts as early as possible. In the city you will also find that the gearbox tends to keep the revs between 1500-2000rpm and this means that when you step on the throttle to close a gap in traffic or while pulling away from a speed breaker, you will find that the engine isn’t as eager to respond. For the most part the shifts themselves aren’t felt when driving calmly but if you do rush the gearbox, the shifts aren’t quite as quick as say the Polo TSI dual clutch gearbox. On the highway it’s super smooth, shifting up early and keeping cruising effortless and efficient as well.

In our performance tests the petrol automatic managed the sprint to 100kmph in 11.24s as compared to 10.99s with the manual transmission. In our efficiency tests the automatic managed 10.25kmpl in the city and 16.72kmpl out on the highway while the manual-equipped car managed 12.43kmpl in the city and 18.84kmpl on the highway run. UPDATE: Since this review Hyundai has discontinued the 1.4-litre diesel engine and added in the 1.5-litre diesel from the Seltos.

Ride and handling
Ride quality wasn’t one of Hyundai’s strong points after being rather soft with the earlier generations of the i20 and the Verna. The current cars have changed that and some will argue that Hyundai have over compensated a bit and they have firmed up their ride a little too much. The Venue dials things back again and is a much nicer balance between handling and comfort. In the city, over our regular roads and speed breakers you will have no complaints at all. It’s just over really broken roads that you will notice some side to side motion creeping into the cabin. On the highway it stays impressively flat and settled quickly over any bumps we could throw at it. Around corners the Venue also stays nice and flat and only really quick direction changes can induce roll into the cabin. The steering too is quite un-Hyundai like in that there is some weight to it, but it hasn’t lost any of its streetability. The weight helps when the pace increases though, and it’s relatively quick too. This all combines to make the Venue a nice, balanced drive that’s good when you’re confined to the city, and while it’s not the sportiest option when the road opens up it’s not boring either.

Hits and misses
There is plenty to like in the Venue that all combine together to make it a very balanced offering in the compact SUV segment.
1 - Peppy 1.0-litre petrol is great to drive, especially with the manual gearbox.
2 - Emergency services that come with the BlueLink package are a great safety addition.
3 - Top end petrol and diesel manual give you everything that you need in a car with creature comforts, safety and peppy performance.

But there are some misses too:
1 - The DCT automatic, which isn’t available in the top end variant, has some weird feature misses (like no rear windscreen wiper, only 2 airbags and rear folding armrest with cupholders) that are frankly quite shocking.
2 - No automatic diesel option.

Verdict
With prices starting at Rs 6.5 lakh and heading up to Rs 11.1 lakh for the DCT Petrol, the Venue is competitive. When pitched against its rivals, the Venue sits below the higher priced Mahindra XUV300 and the Ford EcoSport, at par with the Tata Nexon and just above the Maruti Brezza.

Balance is the one word that comes to mind when you think of the Venue. It manages to cover a number of bases without real deal breakers. Yes, it’s neither as sporty-handling as say the EcoSport is, nor does it pack as much punch as the XUV300 does, but it’s not far from them both in terms of measured performance or driving feel. It packs in a lot in terms of sensible features while throwing in some extra ‘wow’ ones as well. There are some weird feature compromises in the DCT petrol and some of the lower variants, but if your budget allows you to aim for the SX Opt petrol or diesel, you will be more than happy to run with the crowd. UPDATE: Since this review Hyundai has discontinued the 1.4-litre diesel engine and added in the 1.5-litre diesel from the Seltos.