The Volkswagen Tiguan 5-seater SUV Looks Set For A Comeback

While it’s based on the facelifted model, the SUV will feature one major mechanical change 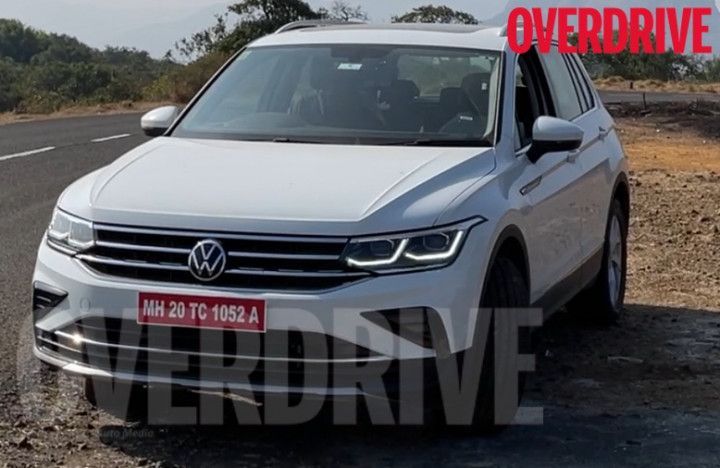 Volkswagen’s SUVW lineup, comprising the Tiguan Allspace and T-ROC, is set to see two new additions this year. While the third model will be the made-in-India Creta-rivalling Taigun, the fourth SUV is nothing but the facelifted 5-seater Tiguan, which has just made its spy shot debut.

This test mule, which has been spotted sans camo, is the production-spec model. Majority of the changes are at the front, courtesy the new angular LED headlamps and the sportier-looking bumper. The keen-eyed will also notice VW’s sleek new logo. While the side profile remains similar, the rear-end gets two minor changes: reprofiled LED tail lamps and ‘Tiguan’ spelt across the tailgate in bold lettering.

The 4MOTION badge at the rear suggests it could come with the fully blown 190PS 2.0-litre TSI turbo-petrol engine, instead of the 150PS 1.5-litre TSI unit we speculated earlier. The 2.0-litre TSI unit is the only petrol engine in the Tiguan lineup to come with all-wheel drive. It will be offered with a 7-speed dual-clutch automatic transmission. It won’t have a diesel variant in the near future.

The dashboard layout remains pretty much the same, except for a few elements such as the new 3-spoke steering wheel with touch-based controls, updated climate control interface with touch controls, and a digital instrument display. It could also feature wireless Android Auto and Apple CarPlay, a wireless phone charger, and connected car tech.

Equipment such as a panoramic sunroof, cruise control, powered front seats, tri-zone climate control, ambient lighting, and auto headlamps and wipers will be retained. Safety will be taken care of by multiple airbags, ABS with EBD, front and rear parking sensors, and electronic stability control.

The facelifted Tiguan is expected to reach showrooms by mid-2021. It remains to be seen if VW locally assembles or imports the SUV. That said, this SUV will be positioned below the Tiguan Allspace and is likely to be priced from Rs 28 lakh (ex-showroom). The Tiguan will lock horns with the Skoda Karoq, Jeep Compass, Hyundai Tucson, and the Citroen C5 Aircross.