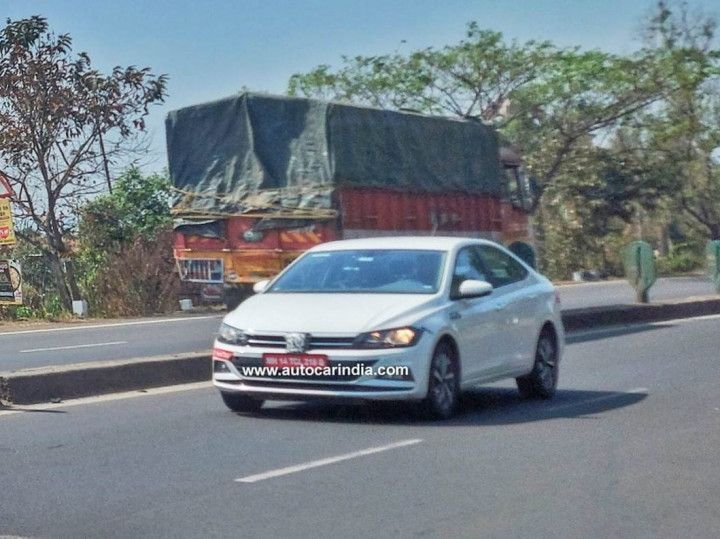 Volkswagen has been testing the Virtus in India. The Virtus is VW’s smallest sedan, but is unlikely to come to India. Instead, it is being used to test components for the upcoming successor to the Vento, as part of VW’s India 2.0 strategy. Spy shots of the Virtus have surfaced again, giving us a better idea about what we can expect from the Vento’s successor.

The model spotted here is the left-hand drive version, indicating that it is an imported test mule. The Vento’s successor will be based on the localised version (MQB-A0-IN) of the modular MQB-A0 platform that the Virtus is based on. This is why the Virtus seems to be used as a benchmark for testing. It is likely that the Vento’s replacement will borrow bits from the Virtus.

The Virtus is longer than the Vento by 90mm at 4,480mm and sits on a 2,650mm wheelbase, which is 97mm more than the Vento’s. The Virtus borrows design cues from other VW models sold overseas, such as the new Polo and the Passat. It gets features such as a 10.25-inch digital driver’s display, an 8-inch touchscreen infotainment system, auto climate control, and auto-dimming rearview mirrors. Some of these could also make it to the Vento replacement.

Like the Vento, its successor is also likely to be powered by a 1.0-litre TSI turbo-petrol engine which puts out 110PS and 175Nm. Transmission options could include a 6-speed manual gearbox along with a 6-speed torque converter automatic unit as well.

There is still some time to kill before the Vento successor’s debut, which is likely to be around Diwali 2021. This will be around the same time as the arrival of the Skoda Rapid’s successor. The sedan to replace the Vento will lock horns with the Rapid’s successor, Maruti Suzuki Ciaz, Honda City, Hyundai Verna, and Toyota Yaris.