Porsche Cayenne Coupe Is The Fastest SUV Around The Green Hell

Despite not being on sale yet, a notary public has certified this lap time to have been made by a production-spec SUV 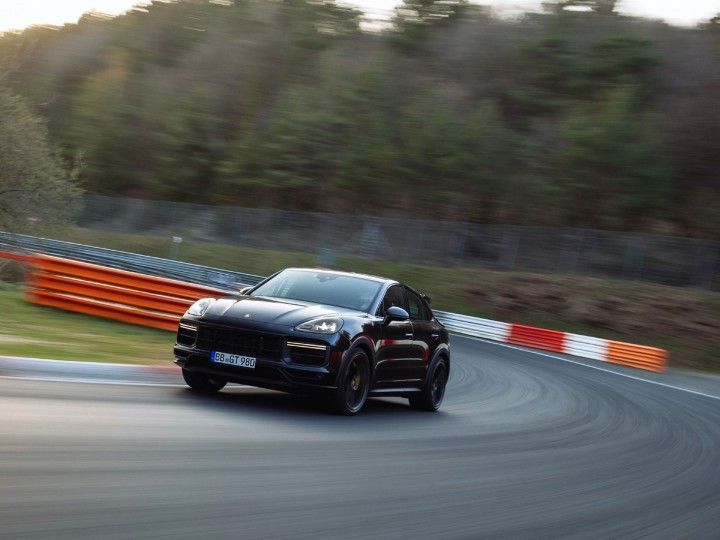 However, some are sceptical of this feat, considering this Cayenne Coupe variant isn’t on sale yet. But the notary public seemed to have dispelled such concerns, entering this lap time in the official rankings of Nürburgring GmbH to have been made by a production-spec SUV.

The SUV was equipped with a racing seat and a roll-cage to protect the driver. It was also fitted with a set of 22-inch Pirelli P Zero Corsa tyres (will be standard on this model) to provide optimal grip around the circuit's 154 corners.

Details are still scarce on what’s under the hood of this yet-to-be-named Cayenne Coupe variant. But since it is based on the Cayenne Coupe Turbo, we think it will get a beefier version of the 4.0-litre twin-turbo V8 that currently makes 550PS and 770Nm.

However, what Porsche did reveal previously is that the upcoming variant will get a new titanium exhaust system with centre mounted tailpipes. It will also get enhanced chassis and control systems, a reworked front axle, 12.7mm wider front rims, increased camber, and a performance-focused Porsche Dynamic Chassis Control active roll stabilisation system.

Here in the country, the Cayenne Coupe retails at prices starting from Rs 1.31 crore (ex-showroom). While there’s no word on this performance-oriented variant, we are expecting the Cayenne Coupe E-Hybrid and the Cayenne Coupe Turbo S E-Hybrid to launch in India, considering they’ve been listed on the official website. The Porsche Cayenne Coupe rivals the Lamborghini Urus and the Bentley Bentayga. Here's an onboad of the SUV's lap record run on the 'Green Hell':