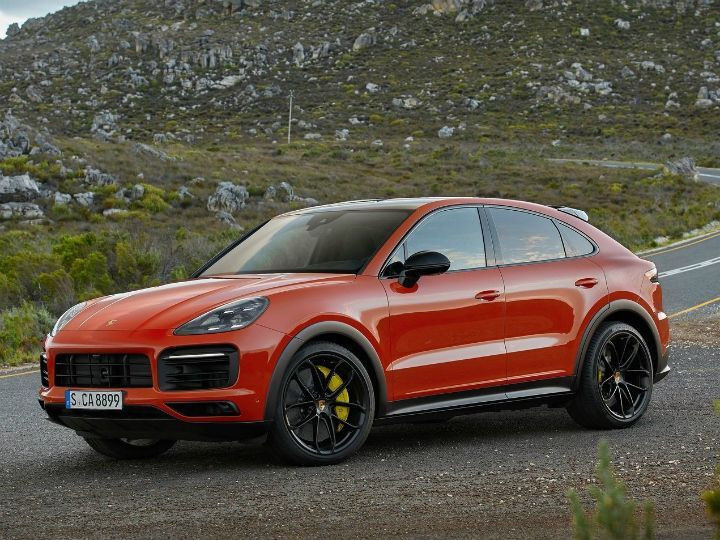 Porsche has finally brought the sleeker and more aggressive sibling of the Porsche Cayenne, named the Cayenne Coupe, in India. Prices start at Rs 1.31 crore and it is offered in the Standard and Turbo trim. It sports a variety of performance-oriented equipment combined with a futuristic cabin. Here’s a closer look at the Cayenne Coupe in detailed images.

At a glance, the Cayenne Coupe looks like any other Porsche on sale today, especially from the front. It is fairly similar to its standard sibling with carryover features like LED headlamps as well a large grille and air dams.

The differences start once you move over to the side of the SUV. The first major difference is the presence of a sloping roofline that gives it a sporty feel. All of this makes the Cayenne Coupe 13mm longer and 20mm shorter by height to the standard Cayenne.

Rounding off the changes on the side are revised rear doors, flared wheel arches as well as a set of 20-inch alloy wheels to give the Cayenne Coupe a muscular look. If you’re looking for more sportiness, you can also avail of a range of 21-inch and 22-inch wheels as options.

The rear of the Cayenne Coupe gets features like sleek connected LED tail lamps, a sporty bumper as well as dual tip exhausts.

The main talking point at the rear of the Cayenne Coupe is the presence of two rear spoilers, with a fixed one above the rear windshield and an active spoiler above the tail lights. The active spoiler rises up to 135mm at speeds of 90kmph and above  to add downforce.

On the inside, the Cayenne Coupe retains the same design as the standard SUV and the new 911. It gets modern equipment like a 12-inch infotainment system with Android Auto and Apple CarPlay, touch-based controls for climate control and driver modes as well as an analogue rev counter with digital screens.

The main talking point inside the Cayenne Coupe is the massive panoramic fixed glass roof that is offered as standard in India. You can also avail of an optional contoured carbon roof if you prefer a sporty feel over premium luxuries.

Under the hood, it is powered by two petrol engines. The standard variant utilises a 3.0-litre V6 engine that produces 340PS of power and 450Nm of torque. These figures propel the SUV from 0-100kmph in 6 seconds and onto a top speed of 243kmph.

Both variants are mated to a 8-speed automatic gearbox and feature an all-wheel-drive drivetrain. Other performance bits include adaptive air suspension with Porsche Active Suspension Management.

The Porsche Cayenne Coupe will take on the likes of the Bentley Bentayga, Mercedes-AMG GLE 43 Coupe and the Lamborghini Urus. We’ve also had a taste of the SUV in France that you can read about here.