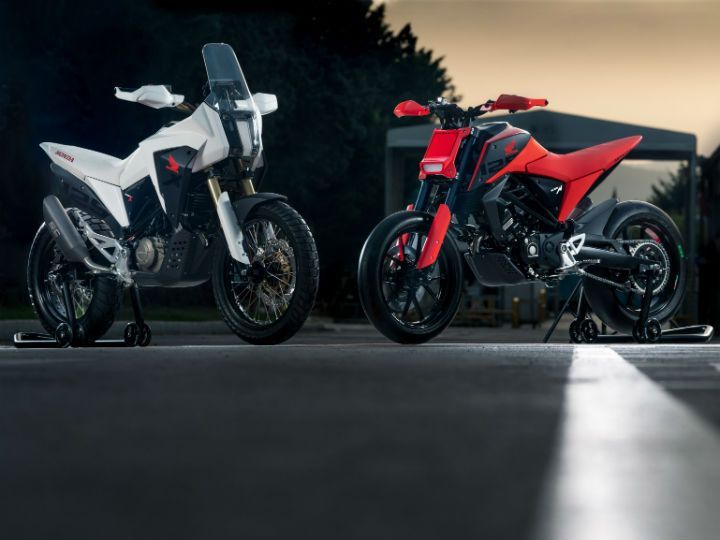 Honda unveiled two really interesting 125cc concept bikes at the 2018 EICMA. One was a supermoto, called the CB125M and the other one was an ADV, known as the CB125X. And now, patent images of both the bikes filed at the European patent office have surfaced online, hinting at the possibility of the two motorcycles heading into production. Interestingly, both the bikes look identical to their respective concepts with all the kit and design elements carried over.

The CB125M looks like a typical supermoto with long travel suspension, alloy wheels wrapped with road-biased tyres, wide handlebars with knuckle guards and a sleek minimal bodywork with a sharp and short tail section.

Also Read: New Honda Launch On June 12: What Could It Be?

The CB125X, on the other hand, borrows design cues from its bigger brother, the Honda Africa Twin. The slim fairing up front is complemented by vertical LED headlamp and windscreen. Just like the concept bike, even the fairing mounted DRLs have made their way to the patented model!

There’s an extra-long single-piece seat extending halfway from the fuel tank and ending at the tail section. The bike rides on what looks like a 19-inch front and 17-inch rear spoke wheel shod with dual-purpose tyres.

Both bikes are equipped with a 125cc single-cylinder liquid-cooled engine. Stopping power is courtesy disc brakes on both ends with a radial caliper up front. However, the CB125X packs petal discs instead of conventional ones for better heat dissipation. The two motorcycles also feature modern inverted forks up front and a monoshock at the rear.

We believe Honda will showcase the production versions of the two motorcycles at this year’s EICMA followed by a launch in early 2020. Honda is likely to launch the bikes in the European markets first and in other developed markets later.

It is unlikely that these bikes will enter our market anytime soon. That said, the premium 125cc segment is indeed heating up with new entrants like the KTM 125 Duke and the upcoming KTM RC 125. Moreover, the former is doing really well in terms of sales too! So if Honda sees potential in this segment, we might just get something like these if not these exactly.