Both the naked bikes are new entrants to the market. So, which bike makes a more sensible buy? Read on to find out 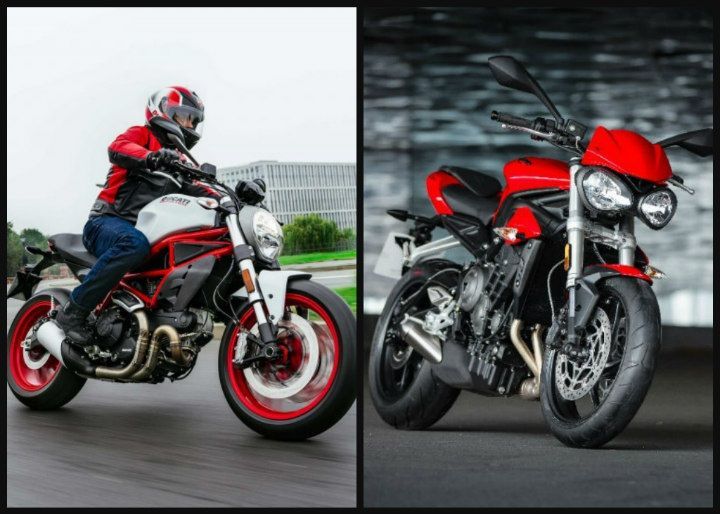 The middleweight naked segment in the Indian motorcycle market is witnessing a boom, thanks to their inherent versatility. Motorcycle majors Ducati and Triumph have launched their latest offerings, the Monster 797 and the Street Triple S, respectively, at competitive introductory prices. While the Monster 797 retails at Rs 7.77 lakh, the Street Triple S costs Rs 8.5 lakh, both ex-showroom, Delhi. Though both bikes have been built with different intentions, their usability is closely matched. So, let’s find out which bike offers the best bang for the buck. Also read: Ducati Launches Monster 797 and Multistrada 950 In India

The Monster 797 has a Scrambler-sourced 803cc air-cooled L-twin engine cradled in the trellis frame. The powerplant puts out 76PS of power at 8250rpm and 69Nm of torque at 5750rpm. The power is channelled to the rear wheel via a 6-speed transmission with slipper clutch. The slipper clutch prevents rear wheel hop while aggressive downshifting.

The Triumph Street Triple S employs a 765cc inline 3-cylinder liquid-cooled engine which is a rebored version of the one found in the Triumph Daytona 675R. Additionally, the blokes at Triumph have blessed this engine with new crank, pistons, connecting rods and balance shifter. This has resulted in an output of 113PS of power at 11250rpm and 73Nm of torque at 10421rpm. Transmission duty is taken care by a 6-speed gearbox. The Street Triple S makes more power despite having a smaller engine, thanks to an extra cylinder and more advanced cooling which increases the engine's thermal efficiency.

The Monster 797 comes with an LCD instrument cluster which is ready for the optional Ducati Multimedia System (DMS) as well. When it comes to electronics, the Monster is equipped with a Bosch 9.1 MP ABS with an internal pressure sensor. This ensures safe braking, especially under emergency conditions. Riding modes and traction control have been given a miss to keep the costs low.

The Triumph Street Triple S equipped with an analogue-digital combo cluster, and a ride-by-wire throttle. The switchable traction control in this bike is linked to two riding modes- ‘Road’ and ‘Rain’, which would be useful to modulate the power accordingly. The bike also comes with standard ABS to enhance braking performance.

The Ducati Monster 797’s trellis frame is suspended using a 43mm Kayaba front fork with 130mm of travel and a Sachs rear monoshock with adjustable spring preload and rebound damping. The rear wheel travel stands at 150mm. The bike comes with top-notch brakes in the form of dual 320mm discs up front with Brembo 4-piston Monobloc calipers and a single 245mm rear disc with Brembo caliper. The brake pads are sintered for optimum efficiency. The 10-spoke alloy wheels are wrapped with Pirelli Diablo Rosso II dual-compound tyres measuring 120-section at the front and 180-section at the rear. The Monster 797 tips the scales at 193kg, with the fluids topped up. When it comes to the seat height, the Monster has an accessible seat which is 805mm above the ground.

The Street Triple S uses 41mm Showa USD front forks which feature Separate Function Forks or SFF technology while the rear features a Showa monoshock unit with piggyback reservoir that offers adjustable preload. The bike is anchored by twin 310mm front discs with Nissin calipers and a single 220mm rear disc with Brembo caliper. The 17-inch wheels are shod with Pirelli Diablo Rosso Corsa tyres with a 120-section front and a 180-section rear and are grippier than the Diable Rosso II tyres. The Street Triple S's seat height is 5mm more than Monster 797's, at 810mm. When it comes to heft, the Street Triple S weighs 166kg dry, which is 9kg lighter than the Monster's dry weight.

The Street Triple S is more expensive than the Monster 797 by Rs 73,000. But for that premium, you get one more cylinder, more power and better electronics and grippier tyres. However, the Monster 797 with its relatively mellow power output, is targetted at beginner riders of big bikes. You do the math.