Skoda Kushaq: All Details In 10 Images 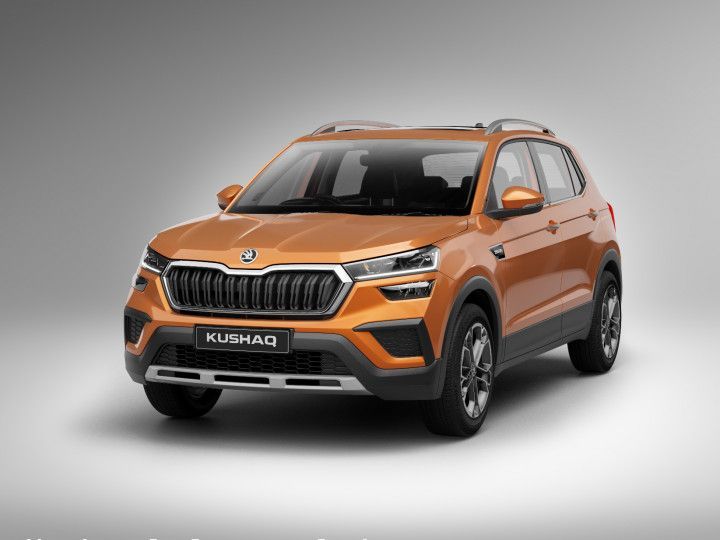 The wraps are off the Kushaq, Skoda’s compact SUV, which will rival the Hyundai Creta and Kia Seltos. Set to be launched by July 2021, the Kushaq is Skoda’ first made-in-India SUV with up to 95 percent localisation. It will be provided with two turbo-petrol engine options across three variants -- Active, Ambition, and Style.

Here are all the details in 10 images:

The Kushaq retains most of the design elements from the Vision IN concept. The large Skoda butterfly grille is eye-catching, and is flanked by sleek LED headlamps with the fog lamps placed right below. Its muscular bumper and aggressively styled air dams up the ferocity in its demeanour.

The Kushaq might seem short compared to its rivals, but the proportions are spot-on. The 17-inch alloy wheels fill the wheel well nicely while its body cladding adds to the SUV quotient. The upright silhouette, roof rails, and the raked A-pillars also look undeniably SUV.

At the back, the L-shaped LED tail lamps with crystal detailing look sharp. Also, a chrome strip mimicking the concept’s LED light bar connects the reflectors on the bumper, and the ‘SKODA’ badging is boldly embossed across the tailgate.

Step inside, and the interiors might remind you of the Vision IN concept. The floating 10-inch touchscreen infotainment system with Apple CarPlay and Android -- a standard feature in the mid and top-specs -- is the highlight here. There’s a two-spoke steering wheel and erm… analogue dials with multi-info display. The top-spec Style features ventilated front seats.

The Kushaq is provided with two turbo-petrol engines: a 115PS/175Nm 1.0-litre and a 150PS/250Nm 1.5-litre motor. A 6-speed manual transmission is offered as standard. While the smaller engine has an optional 6-speed torque converter, the larger motor has a 7-speed DSG.

Bookings for the Skoda Kushaq will open from June, and deliveries are expected to begin from July. We expect it to be priced between Rs 9 lakh and Rs 17 lakh (ex-showroom). The Kushaq will lock horns with the Hyundai Creta, Kia Seltos, and the upcoming VW Taigun.