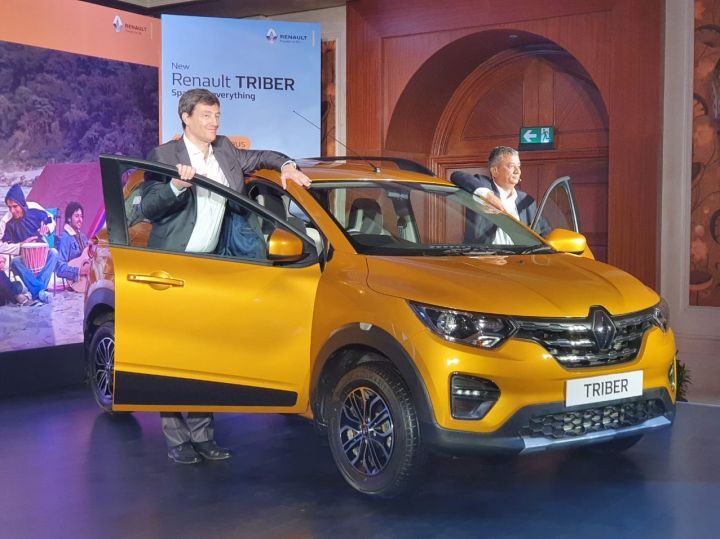 Renault has launched the Triber in India with prices starting from Rs 4.95 lakh going all the way till Rs 6.49 lakh (ex-showroom India). The MPV is available in four trim options: RXE, RXL, RXT and RXZ. Basically, the Triber is a niche product that comes with 7 seats and a price tag that will pit it against B-segment hatchbacks. Renault with the Triber is planning to bridge the gap between the Kwid and the Duster in India.

What’ll help the new MPV ferry passengers is a 1.0-litre three-cylinder Energy motor with Dual VVT. 72PS of power and 96Nm of torque are sent to the front wheels using a 5-speed manual while an AMT will be offered at a later stage. Claimed efficiency figures are 20kmpl and 20.5kmpl for the AMT.

The Triber’s main selling point will be its flexible seating options. Renault explains it in four seating modes: Life, Tribe, Surf and Camp. Life mode is the five-seater option which comes with a humongous 625 litres of boot space (third row EasyFix seats removed). Tribe mode is the 7-seater version with the third-row seats and it still gets 84 litres of boot space. Surf and Camp modes are the less important configurations which are four and two seating options.

Behind the Triber’s modular seating options is its CMF-A platform. Here’s a table where we pitch the Triber against some hatchbacks and the Datsun Go+:

As we mentioned before, the Triber has no rivals as such. But when compared with the hatchbacks around, it is clear that the Triber trumps them in almost every parameter. The boot space of 625 litres stand out and it is more than what the bigger Ertiga offers with its third-row seats folded down.

The Triber looks unmistakably Renault thanks to various styling elements like the grille that leads towards the headlamps. The lower bumper houses the fog lamps and the LED DRLs complete with an air dam in the centre. Another nifty design feature is a step up after the B-pillar, which is a smart way to increase the head room for rear passengers. The rear features a more relaxed and minimalistic design language with split tail lamps.

Being a unique offering and the first sub-4m MPV in the country, Renault has high hopes for the Triber. In the current scenario, the Triber doesn't have any rivals but it will face competition from hatchbacks like the Maruti Swift, Ford Figo, and the Hyundai Grand i10 Nios.