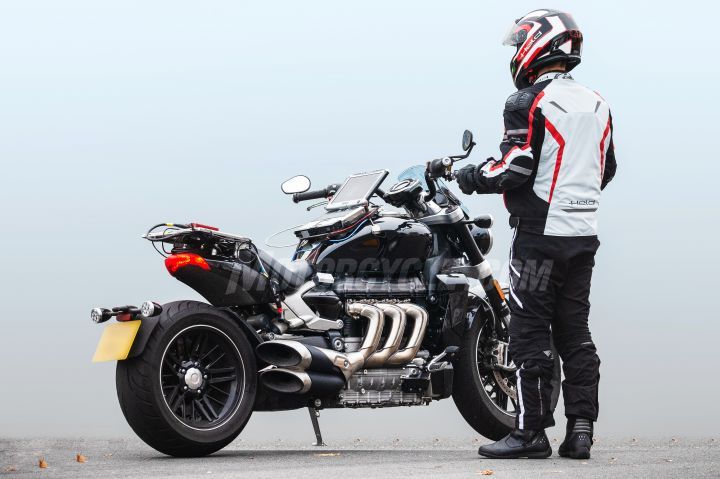 Triumph has been testing the new Rocket III for quite a while now. The company even showcased a prototype model at its dealer conference back in December. Although no clear pictures of the bike were available then, the folks at Motorcycle.com have released a bunch of spy images that give us a hint of what we can expect.

For starters, the new design changes make it look more modern and quite like the Ducati Diavel. It looks more muscular than before and seems to have a much steeper rake as well. The footpegs seemed to have moved forward a bit when compared to the earlier prototype. So is it possible that there could be two versions of the Rocket III? Only time will tell.

The exhaust system has also been revised to make it comply with Euro V emission norms. It comprises of two vertically stacked stubby exhausts on the right and a third one on the left, all of which spits out emission from the same inline-three engine. Speaking of engines, the outgoing Triumph Rocket III packs the world's largest production motorcycle engine - a 2.3-litre unit that churns out an earth-shattering 221Nm of torque at just 2750rpm!

Believe it or not, but some reports suggest that Triumph could further increase the engine capacity from 2294cc to 2500cc while making it comply with Euro V norms. That said, considering the revised ergonomics and even larger engine, it'll be interesting to see how Triumph manages the issue of heat dissipation.

The new motorcycle also seems to sport a more beefy USD fork at the front and a monoshock unit at the rear, which is tucked under the seat. However, the single-sided swingarm continues to house a shaft drive.

The stubby tail now houses the brake lights. The turn signals, on the other hand, have been moved to the tyre-hugging fenders. Overall, the bike looks sportier and more menacing than before. We simply love it. Expect the bike to come packed with a host of electronics, including ABS, traction control, launch control and various riding modes to deal with the insane power and torque figures.

From the looks of it, the new Triumph Rocket III looks almost production-ready. It’s likely to debut at the 2019 EICMA Show in Milan, Italy later this year. As far as its India launch is concerned, we expect it to arrive here by 2020.