Is it just the name or are there any changes to the new Tiger worth taking notice? Well, read on to find out 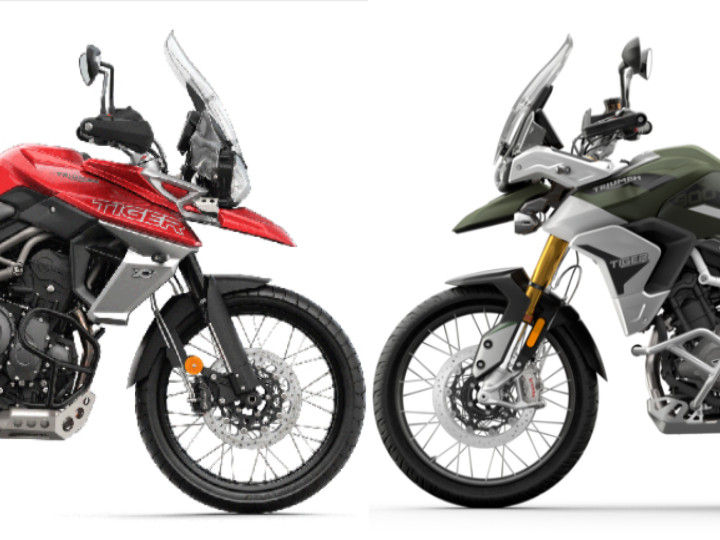 If you have been on the internet, then you’d probably know that Triumph has unveiled the all-new Tiger 900. The chaps at Hinckley have given the middleweight Tiger a substantial update after what seems like a long time now. The Tiger 900 will replace the Tiger 800 that’s currently sold in India. Want to know more about this adventure tourer? Head to our detailed report by clicking on these words. Now let’s focus on the differences between the new bike and the old Tiger 800.

Triumph has given its kitty a new and a bigger heart. The old 800cc unit has been replaced by a Euro 5/BS6-compliant 888cc engine. Although the engine has grown in size, the power output remains the same at 95PS. However, Triumph has tuned this engine a bit differently with a new 1-3-2 firing order that gives the ADV a throaty exhaust note. Moreover, the torque figure now stands at 87Nm (8Nm more than the 800) and it kicks in at just 7250rpm instead of 8050rpm in the previous version.

Also read: Here’s All You Need To Know About The New Triumph Tiger 900

With the middleweight segment heating up with manufacturers bringing their A-game, Triumph decided to throw every top-spec component at the 2019 Tiger 900. Moreover, the Tiger 900 can also be seen in the new James Bond flick, so Triumph engineers had to come up with their best because we don’t think they’d be pleased if they find Mr Bond in the rear view mirrors.

The base models and the GT variants are equipped with Marzocchi forks at the front and rear. While the front USD (180mm travel) is compression and rebound adjustable, the rear monoshock (170mm travel) gets preload and rebound adjustability. However, the GT Pro trim gets an electronically adjustable unit at the rear, which is a first for the Tiger. The Rally trims, being the proper off-road spec version, gets Showa units. The front USD (240mm travel) is fully adjustable and the rear can only be adjusted for preload and rebound settings. While the older models were equipped with Showas, Triumph has given the new units more travel and we expect they are tuned a bit differently as well.

Triumph has finally given the Tiger sidewall-laced 21-/17-inch spoke rims that allow for tubeless tyres to be fitted. The Rally models will get Bridgestone Battlax Adventure rubber as standard. But as an option, you can also spec the Tiger 900 with Pirelli Scorpion Rally tyres. Triumph has equipped the new Tiger 900 with Brembo's top-end Stylema radial calipers. These are the same units found on the Ducati Panigale V4 and  Triumph's Rocket 3, which will be unveiled in India today.

In order to house the new engine, Triumph has tweaked the chassis as well. While the main frame is still an updated version of the previous one, it gets a new bolt-on subframe at the rear. Due to this, the ergonomics have been altered and the handlebars are 10mm closer to the rider than before. However, the Rally models get a seat height of 850mm, which is 10mm higher than before.

The major update in the electronics department has to be the addition of IMU-based ABS system. It gets cornering ABS co-developed with Continental. There are six rider modes to choose from: Rain, Road, Sport, Rider, Off-Road and Off-Road Pro and a bi-directional quick-shifter.

Thanks to the new front end, the 2019 Tiger looks slimmer and meaner compared to the previous iteration. The British bike maker has used the Tramontana as the design inspiration and we must say it’s a job well done. The revised front end and the compact dimensions give the new Tiger 900 an enduro-ish look.