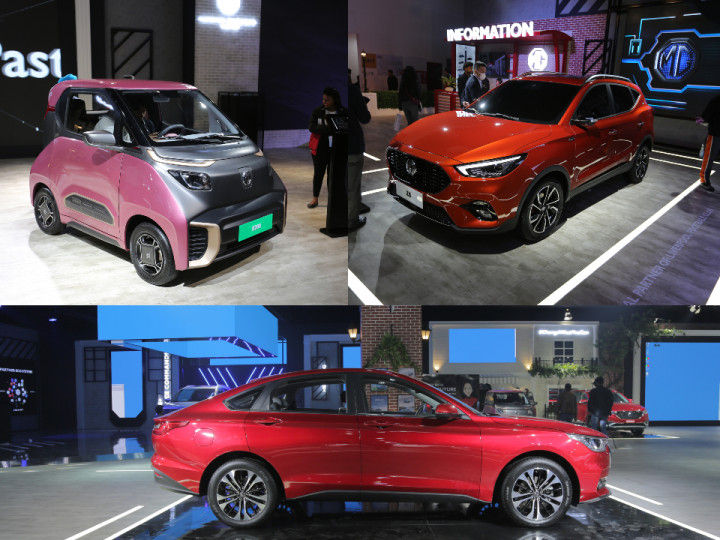 MG Motor India managed to showcase a lineup of innovative products at Auto Expo 2020 despite the Coronavirus scare. Three of the company’s vehicles will soon be launched in India, too. Apart from the Gloster, G10, and Hector Plus, MG also exhibited several electric vehicles (EVs), a concept car, and internal combustion cars. If you missed the action at the Expo, read through our list of the carmaker’s exhibits at the Auto Expo:

While the ZS EV was launched in India earlier this year, it has a facelifted internal combustion sibling on sale in other countries. The ZS Petrol features a more rounded aesthetic and redesigned head and tail lamps. Under the bonnet, you may find either a 1.5-litre naturally aspirated petrol engine or a 1.3-litre turbocharged engine. The former makes 120PS and 150Nm and the latter is more powerful at 163PS and 230Nm. Know more about the SUV in our follow-up story.

The Hector will soon get a third row in India, but that’s not all that’s new. The 6-seater Hector SUV showcased at Auto Expo also featured a cleaner look and LED headlamps and taillamps. The showcased model had second row captain seats and a bench seat in the third row. A 7-seater variant will also be launched in India.

We usually have a pretty good idea of what carmakers have up their sleeves ahead of motor shows, but the G10’s unveiling was a surprise. It is an MPV which is on sale in multiple countries and will be launched in India this year. The Toyota Innova Crysta had long ruled the MPV mile-muncher segment in India but the arrival of the G10 and Kia Carnival is sure to make Toyota hot under its collar. Here’s how the Carnival and G10 match up, if you’re curious.

Another MG to rival a Toyota is the Gloster which comes to India this October. It is a 7-seater SUV larger than both the Fortuner and Ford Endeavour. It gets powerful 2.0-litre petrol and diesel engines and plush interiors which look more modern than the segment favourites. Safety tech includes autonomous emergency braking and blind spot monitoring and the Gloster has a 5-star ANCAP rating under its belt. An all-rounder from MG, then?

MG hasn’t disclosed plans to bring the 360M to India, but it seems to be the perfect Mahindra Marazzo rival for India. The MPV features a clean design and a handsome face, a 1.5-litre petrol engine, and a host of segment-relevant features such as an 8-inch touchscreen and a sunroof. Know all about the MPV in our story.

The RC-6 is one of MG’s most recent vehicles and it shows in its aesthetic and equipment. Take one look at it and you know it’ll create a stir in the D-segment sedan market. The Skoda Octavia and Honda Civic are both proportionate cars with proven performance, but the RC-6 has space and ground clearance on its side. Read more about it in our story.

Keeping the tradition of non-driver focused autonomous motor show exhibits, MG showcased the Vision-I concept at Auto Expo 2020. It features doors that open outward and slide to the side and seating for four occupants. Unlike most recent concepts, the 5G connected car’s interior is devoid of screens. Curious? Read this.

The MG3 is the polar opposite of the Gloster SUV. Built to be affordable and devoid of embellishments, this little hatch competes with the Suzuki Swift in other markets. It holds a torquey 1.5-litre petrol engine under its bonnet and features climate control and a single-DIN infotainment system. Here’s all you need to know about it.

MG had another small car with more character than the MG3 -- the E200 EV. It’s less than 2.5m long and has a 250km range. A large lower grille, air dams, and an oversized MG logo add character to the flat nose. It has only two seats but a total of 11 different storage spaces. Don’t hold your breath on an India launch, though.

It’s a Tesla-esque luxury electric crossover with a brilliant blue paint option. It remembers where you parked it last and can find its way to the space by itself. The Marvel X combines advanced driver assistance tech with luxurious handmade leather. Need we say more?