The MG G10 MPV Is One Big Surprise At Auto Expo, Quite Literally! 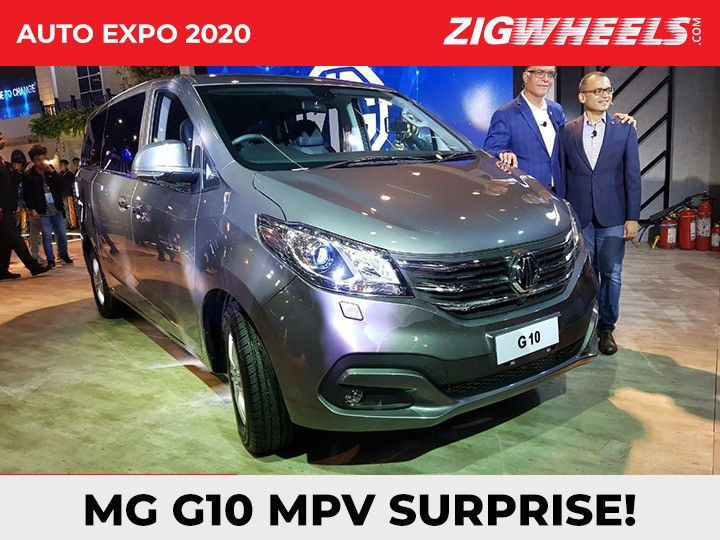 MG Motor India has just landed a surprise at Auto Expo 2020, and it is quite literally massive! The G10 MPV could be coming to India before this year’s festive season, if officials from the manufacturer are to be believed. The G10’s reveal follows the recent launch of the Kia Carnival just 2 days earlier. From the looks of it, it will pretty much sit in the same space as the Kia offering and could also undercut it in terms of price and be closer to the Toyota Innova Crysta. The MG G10 can be configured to seat 7 to 9 passengers including the driver. It is sold as the Maxus G10 in China by MG parent SAIC.

The G10 features a large 3-piece panoramic sunroof, voice recognition, and other smart features seen on current MG offerings via the i-Smart system. We expect to see the i-Smart 2.5 version in the G10 at its launch here, which also has a chit-chat feature to enable users to have AI-enabled short conversations with the car. All of this can be accessed via the 10.1 touchscreen infotainment display on the dash.

Additionally, and since this is a car to carry multiple passengers with ease, you also get comforts such as powered front seats, a 220V laptop charging point, 360-degree camera to tip toe through tight spots, and a convenient electric tailgate.

In China, the Maxus G10 comes powered by a 2.0 litre turbocharged petrol engine, which produces 220PS and 345Nm. There is also a 1.9 litre turbocharged diesel motor outputting 147PS/350Nm available. Either motor comes mated to a 6-speed automatic transmission only.

While MG Motor India has not confirmed the launch timeline or the specifications of the G10 that will come to India, MPVs certainly seem to be the flavour of the season. So we can expect them to expedite its arrival before the trend wanes. To boot, the Innova had no real competitor until the Carnival. And with the MG G10 seemingly on its way, things could finally heat up the people carrier space.

While it is priced around Rs 13 lakh in China, we expect it to come in at around the Rs 20 lakh-mark when launched in India. At this price, it would still be almost Rs 5 lakh cheaper than the Carnival and about Rs 2 lakh more than the Innova -- certainly worth waiting for. Now, we begin counting down.