The wait for this much anticipated SUV is almost over 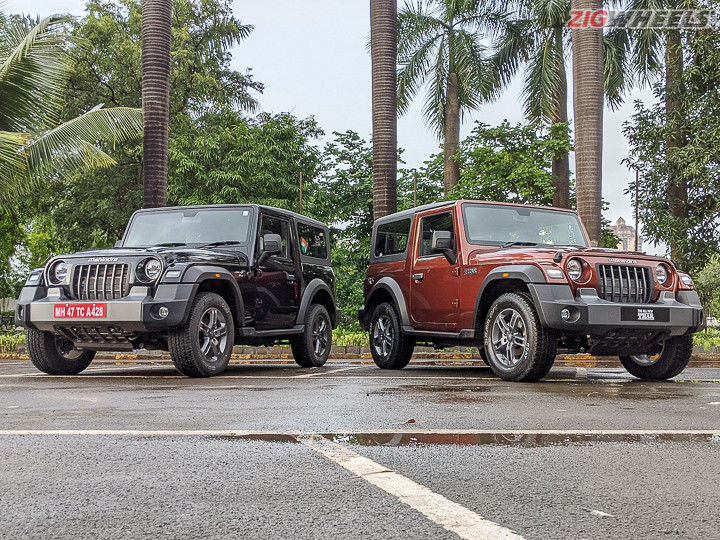 The wait is almost over for the second-gen Thar as Mahindra is set to launch the much anticipated SUV on October 2. Sure, you must be knowing each and everything about the second-gen Thar by now. But for those of you who want a quick recap, here’s five things you need to know about it.

The Thar will be offered in three variants: AX, AX Opt and LX. The AX variant appeals to adventure seekers with its bare bones and tough-as-nails looks while the LX, with premium elements like alloy wheels, is aimed at the urban crowd.

Petrol Engine For The Petrolhead

For the first time ever, Mahindra will offer the Thar with a petrol engine. It’s a 2.0-litre turbocharged unit that belts out 150PS of power and 300Nm of torque (320Nm in AT). You can also have it with a 2.2-litre diesel engine that puts out 130PS of power and 300Nm of torque. Both engines can be had with either a 6-speed manual or a 6-speed automatic transmission. The Thar drives all four wheels and comes with a low range transfer case for tackling tricky terrain.

While the previous-gen Thar was barebones, the new-gen model comes equipped with all the essentials one would need. Highlights include a 7-inch infotainment system with Apple CarPlay and Android Auto, roof mounted speakers, electronic air conditioner, a colour multi-info display, steering-mounted audio controls, cruise control, front power windows and remote locking. The best part is that all these features can be operated on a drizzle as the cabin is IP54 water and dust resistant.

There’s no denying that the new-gen Thar looks like a Wrangler and that can be good news for many. Yes, Mahindra has differentiated it with a redesigned grille, different fender design and muscular body lines . The Thar screams attention wherever you take it. We bet you’ll be receiving thumbs up and questions from people while driving the Thar.

Considering the heavy upgrades the SUV has received, the new-gen Thar isn’t going to come cheap compared to the previous model. We expect a starting price of Rs 10 lakh (ex-showroom) for the base-spec variant and prices could go up to Rs 13.50 lakh for the top-spec automatic variants. The Thar doesn’t have any rivals currently but it could lock horns with the upcoming Suzuki Jimny and Force Gurkha.