A drive in a convertible Lamborghini, in Italy is the perfect day out 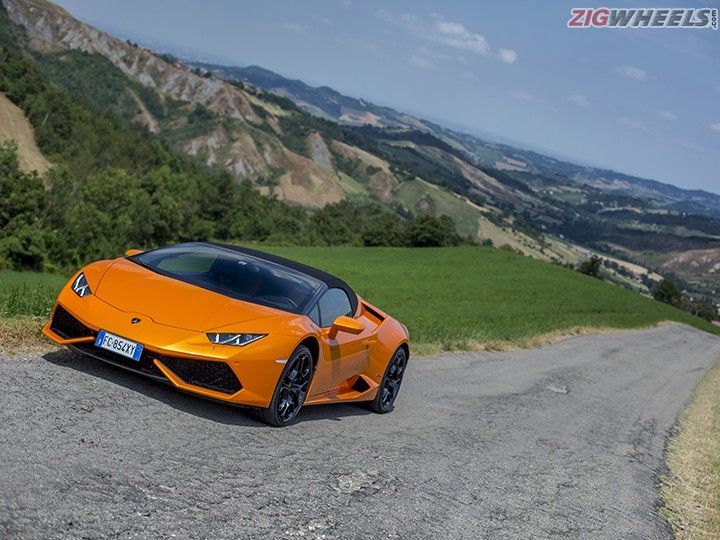 As I’m completing my documentation at Lamborghini’s head office in Bologna, I really can’t help but grin wide. After all, it isn’t every day that you get to visit the factories of one of the most revered automotive brands and also take their latest convertible sportscar out for a drive. I’ve got to admit, mine is the best job in the world. The car in question is the Lamborghini Huracan Spyder, and I guess it really doesn’t get more special than driving this car around Bologna, where the car is built.

And Italy is a beautiful country – the roads, scenic locales and not to mention Italian women and food! The drive to the commune of Zocca, in the Italian region of Emilia-Romagna is an hour away from the factory, my destination for the day. With its mix of smooth tarmac, silent country roads, straight highways and a set of good twisties, the route had everything I could have asked for. The icing on the cake was the pleasant weather which made top down driving in the Italian countryside a dream come true.

And driving a pearl orange convertible sportscar is a unique experience, even in Italy. You might want to think people there are used to witnessing these cars often, but glances of approval, thumbs-up signs and ‘Bella macchina’ shout-outs are quite common even there. Also, friendly honks and headlamp flashes got me worried initially, but then I understood it was all in appreciation of the car!

The car’s insides were swathed in Alcantara and orange leather, matched perfectly by bright tangerine stitching on the black leather of the dashboard and center console. What also grabbed my attention was the brightly lit 12.3-inch display behind the steering wheel which gives you all the information you’ll ever need or want. Next up are the toggle switches on the steering wheel which after half a day of driving makes you assume that ‘Corsa’ means ‘insane crazy mode’ in Italian. Maybe. The centre console also has a small display for essential readings followed by fighter-jet inspired toggles, air-conditioning and multimedia controls.

Irrespective of whether the roof is up or down, the car looks gorgeous, and the good thing is you can put the roof up or down on the go, at speeds of up to 50kmph. Turning the car on was a visual and aural pleasure for the occupants and by-standers both, as the naturally aspirated 5.2-litre V10 engine growls into life in a smile inducing way.

What added to my joy was the ease with which I was able to drive the car even in traffic or on smaller roads. Needless to say, the car is blindingly quick. The 0-100kmph feat is achieved in a mere 3.4 seconds, something I experienced on the open highways. The 7-speed dual clutch transmission is super quick to swap ratios, and you also get a set of rather large paddles mounted onto the steering column. What was really noteworthy though was the fact that I was able to hold a conversation with my co-passenger even at 100kmph, with the roof down!

With its kind of performance, handling and driver aids the Huracan Spyder not only feels set to be taken straight to a racetrack, without any modifications, but it also feels perfect for long drives. Put it into Strada mode and the ride quality ensures you aren’t too fatigued even after hours of driving, while the 610 horses ensure you reach your destination super quick.

Driving over the cobbled roads in and around Zocca helped me realise that ride quality is decent in Strada mode but gets progressively stiffer in Sport and Corse. Another concern was the low ground clearance. The saving grace though was the Suspension Lift which raises ground clearance from 135mm to 175mm.

Once in Zocca, I found a café that would allow to me park the car close to the seating. The best thing then was to sit and admire the car’s beautiful design. As I placed the order for some Spaghetti Aglio E Olio I also couldn’t help but think about the day. What had started off as an overly nervous time behind the wheel, had been transformed into one of my best driving moments. Such is the beauty of the Lamborghini Huracan Spyder LP 610-4.

The brand is known to make some of the most lustworthy cars, and with its kind of finesse and engineering the Italian marque is among the most revered brands in the history of the automobile. And its latest, the Huracan Spyder is a car that truly takes the game forward – not just with its design and dynamics, but also its lifestyle quotient. It is a car that lets you revel in its performance while also ensuring you are seen. The hand built V10 engine is a work of art, no less, since large capacity naturally aspirated engines are a dying breed.

Kudos to Lamborghini for not resorting to turbocharging. That engine with the fantastic gearbox, well-engineered chassis and brilliant suspension makes the Huracan perfectly drivable every day, not to mention scorch a racetrack. And at Rs 3.89 crore ex-showroom in India, the car is quite a deal for what it offers and the legacy of the brand.

As I finished my lunch I also realized it was all about to end, as I had to now drive back to return the car. And as much as I would have wanted to go back slow to spend more time in the car, I knew the Huracan is a car you only enjoy fast!

View All
All Upcoming Lamborghini Cars