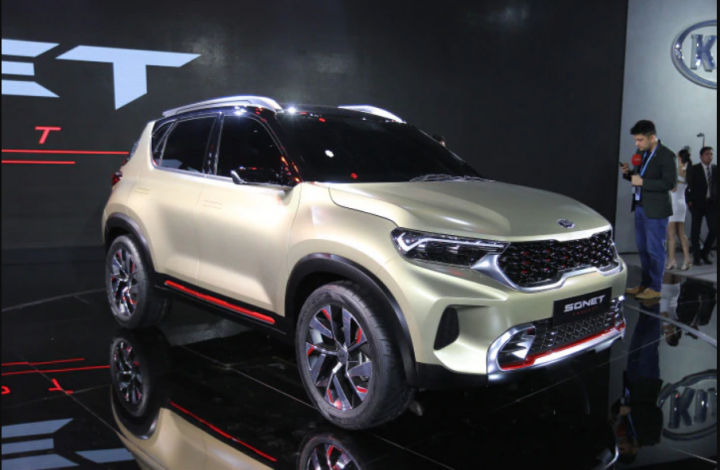 With just two products in its lineup, Kia has already established itself in India. The Korean carmaker now plans to step things up with its next offering, the Venue-based sub4-m SUV Sonet, which is expected to be launched in August. Most details of the Sonet are still under wraps, but thanks to a leaked image, we’ve now got a glimpse of its cabin.

The first thing that stands out is the massive 10.25-inch touchscreen, similar to the one we’ve seen in the Seltos. The flat-bottom steering wheel is also a straight lift from the Seltos. Unlike the Seltos, the Sonet's cabin features a funky design with large AC vents separated by an array of buttons. The colour theme here is black with silver accents and red stitching for the seats.

We got a glimpse of the Sonet at Auto Expo 2020. Kia has also revealed that the SUV will feature a 10.25-inch infotainment system, a Bose sound system, climate control, and connected car technology. Apart from these, it is also safe to expect a wireless phone charger, cruise control, and keyless entry with push-button start.

The Sonet will be more or less based on the same platform as the Hyundai Venue. It is expected to come with three engine options: a 1.5-litre petrol and diesel engine along with a 1.0-litre T-GDI engine. The latter is expected to put out 120PS and come mated to a 7-speed DCT gearbox like in the Venue.

As of now, August 2020 is what you should look at if you’re waiting to see the Sonet on our roads. But that could get pushed a bit due to the ongoing COVID-19 scare and lockdown. We expect the Sonet to be offered at a starting price of Rs 7 lakh (ex-showroom). It will rival the Hyundai Venue, Ford EcoSport, Tata Nexon, and the Mahindra XUV300.