2017 will start on a high note for Kawasaki enthusiasts in India as the Japanese bikemaker will ride in four new motorcycles in January, 2017 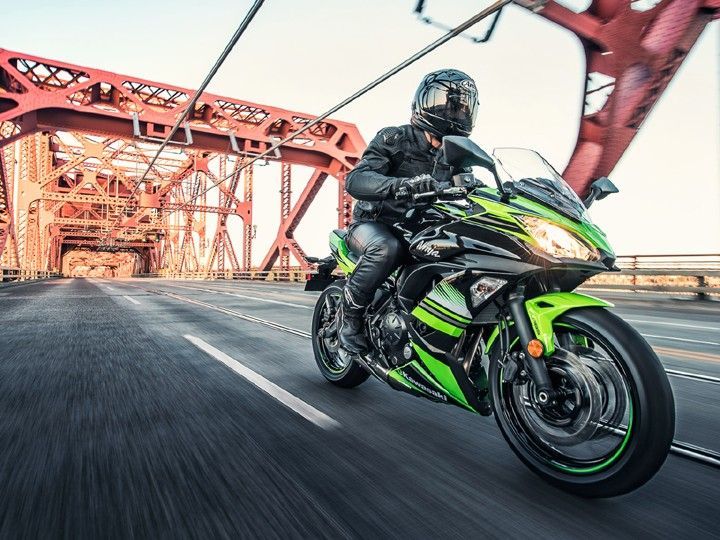 The one bike that helped establish the Japanese brand in the Indian performance motorcycle segment has to be the Ninja 650. In the form of the Kawasaki Ninja 650, Indian buyers had an option to buy a reliable, fast and good looking sports tourer. But with the passage of time and new motorcycles entering the fray, the Ninja 650 had begun ageing. Addressing this aspect, Kawasaki unveiled the new avatar of its 650cc sports tourer at the 2016 INTERMOT motorcycle show in Germany few months back. The fairing has been made sharper and the new motorcycle gets twin-split headlamps, similar to the Ninja ZX-10R which makes it look aggressive. The rear section has been redesigned and it also gets split-seats with the saddle height being lowered.

The bike employs a multi-tubular aluminium frame that has reduced the weight of the bike by a massive 19kg, while also improving handling dynamics. Power output hasn’t increased but mid-range performance of the bike has been improved and now it is Euro 4 emission norm compliant. Braking hardware has also been improved as it gets revised calipers from Nissin and Bosch 9.1 ABS system. We expect the 2017 Kawasaki Ninja 650 to be offered with ABS as standard and it would be brought via the CKD route.

When the Kawasaki Z800 made its debut in the Indian two-wheeler market, it had the distinction of being the most affordable in-line four cylinder motorcycle on sale in the Indian market. The bang for buck pricing and the performance soon escalated the Z800 among the most popular names in the performance naked motorcycle segment. Among all the positives of the Kawasaki Z800, there was a chink in its armour and that was its 231kg kerb weight which was 25kg more than the bigger Z1000! So when Kawasaki engineers were working on its replacement, it was evident that the next-generation bike would be put through a strict diet. Thus, the new Kawasaki Z900, which is the successor of the Z800, tips the scale at 208kg which is a massive drop of 23kg!

The Kawasaki Z900 gets a cosmetic overhaul and its sharp lines have been evidently inspired from the evil looking Z1000. It’s not just the styling that has been adapted as the new 948cc, in-line four-cylinder motor is also similar to its bigger sibling and delivers 125PS and 99Nm of peak torque as opposed to 112PS of the Z800. The motor is mated to a 6-speed gearbox while slipper clutch is standard. The Kawasaki Z900 also features a new trellis frame. The Kawasaki Z900 is expected to be brought via the CBU route to our market from Thailand, similar to the Z800, but expect it to demand a premium of around Rs 1 lakh more than its predecessor.

The Kawasaki ER-6n, in our opinion, is among the most practical and easy to ride performance bikes on sale in the Indian market. Despite being such a versatile machine, the bike never managed to get the sales charts ringing, owing to its lack of visual appeal. The Japanese bikemaker took stock of the situation and unveiled the new Kawasaki Z650 (ER-6n in India and a few other markets) at the 2016 EICMA motorcycle show. The new Kawasaki ER-6n gets a cosmetic makeover with a chiseled tank, which now gets similar mirror-paint finish like the Ninja H2, tank shrouds, contrast colour on the frame and sharper looking headlight, making the new Z650 a visually pleasing bike. Powering the new Kawasaki Z650 is a liquid-cooled, parallel-twin motor, churning out 68PS, which is a drop of 4PS in comparison to its predecessor.

But the bikes performance wouldn’t see much of a drop as the new tubular chassis has been instrumental in reducing the kerb weight of the motorcycle as well. The new motorcycle also gets equipped with slipper clutch and the saddle height is now lower at 790mm. Braking responsibilities are handled by twin-disc brakes at the front and a single disc unit at the back, while ABS is standard.

Retro styled motorcycles have garnered rising demands in the last few years. Not every performance motorcycle buyer wants a fire breathing monster with savage acceleration as there are some bikers who desire a much more relaxed and easy-to-ride machine yet being different enough to separate them from the masses. British bikemaker Triumph Motorcycles has tasted success with its retro styled Bonneville range of bikes and so has Ducati with its new Scrambler. Kawasaki also wants to join in the action and will launch the beautiful W800 in the Indian market in January, 2017.

The round headlamp, dash of chrome, sculpted tank, spoke wheels and the pea shooter style pipes endow the W800 with a charm that is difficult to resist. Underneath the simplistic styling lies a modern motorcycle. The Kawasaki W800 is powered by a 773cc, air-cooled, vertical twin mill with fuel-injection that develops 48PS of power and 60Nm of peak torque. For damping, the motorcycle features telescopic forks and twin dampers at the back. Braking duties are handled by a 300mm disc brake at the front and a drum brake at the rear. ABS has been given a miss to keep costs low. The Kawasaki W800 will square off against the Triumph Bonneville Street Twin and the Ducati Scrambler but we expect Kawasaki to undercut both its rival with respect to pricing. So if you always desired a simple, easy to ride, retro style motorcycle with bulletproof reliability, well, the Kawasaki W800 should be in your sight.