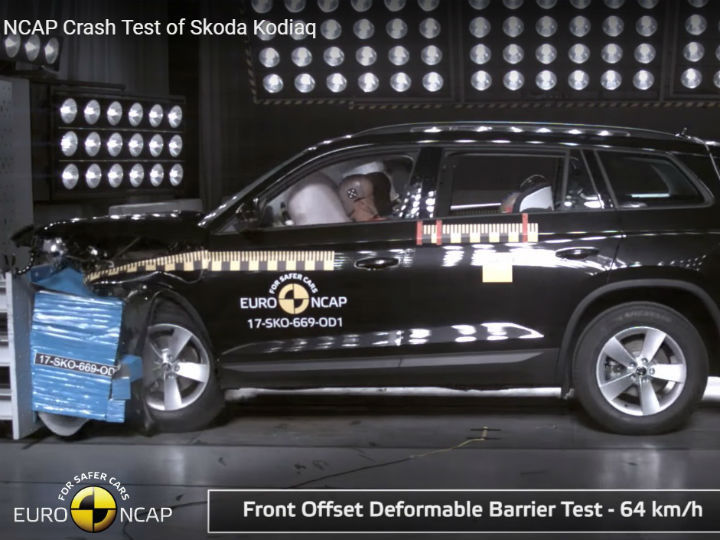 It’s good news for potential buyers of the upcoming Skoda Kodiaq, the Czech carmaker’s flagship SUV that will be launched here in a couple of months. The Euro New Car Assessment Programme better known as the Euro NCAP has just concluded its exhaustive list of crash tests on the 7-seater Kodiaq. The left-hand drive car sporting a 2.0 TDI heart passed with flying colours scoring a 5-star rating.

Weighing 1,635kg, the Ambition variant of the Kodiaq that was tested was equipped with seven airbags (which included a knee airbag for the driver), seatbelt pretensioners with load limiters and ISOFIX rear child seat mounts. The test car also featured Skoda’s autonomous emergency braking system, speed assistance and the optional lane-assist system as well. It must be noted that some of radar-based features are unlikely to make their way to the India-spec car to different regulations in place here. Also read: Skoda Kodiaq: First Drive Review

The Kodiaq, which made its world debut as the Vision S concept at the 2016 Geneva Motor Show, is based on Volkswagen’s modular transverse matrix (MQB) platform. This platform also underpins the Skoda Superb and Octavia, the recently-launched Volkswagen Tiguan and the Audi A3 and A4. When launched in India, the Kodiaq is expected to be offered with two engine options - a 2.0-litre TSI turbocharged petrol ad a 2.0-litre TDI turbocharged diesel. The petrol engine is expected to be coupled to a 7-speed DSG gearbox while the diesel version will get the 6-speed DSG as standard. Both versions are expected to come with the option of a 4WD setup as well.

In terms of features, expect Skoda to offer class-leading goodies like the 10-speaker Canton sound system from the Skoda Superb, built-in GPS navigation and wireless charging for your smartphone. The standard 7-inch infotainment system could also be swapped for a larger 8-inch screen that supports Apple CarPlay, Android Auto and MirrorLink.

Skoda India has already listed the car on their website and it should arrive in the next couple of months. In fact, some dealers have even started accepting unofficial bookings for Skoda’s first ever full-size SUV. When launched here, the Kodiaq will be priced around the Rs 25-30 lakh mark and compete with other heavyweights in the segment like the Toyota Fortuner and the Ford Endeavour. At the expected price point, it may also go up against the recently launched Isuzu MU-X and the VW Tiguan as well.