Honda HR-V vs Creta vs Kicks vs Captur: Spec Comparo

After the lacklustre response to the BR-V, Honda is set to roll out the HR-V to take on established rivals like the Hyundai Creta 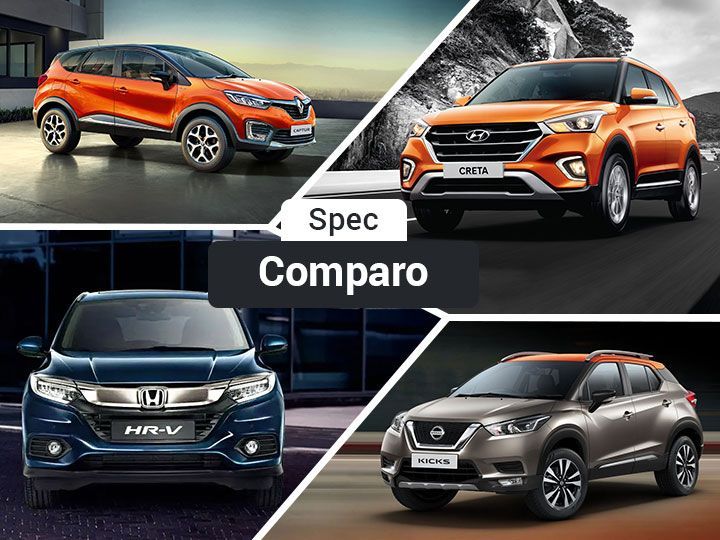 The Hyundai Creta has for long been the undisputed king of the compact SUV segment. While Renault and Nissan have tried their hand at beating the Hyundai with their Captur and Kicks, the Creta continues to be the default choice for most car buyers thanks to its extensive feature list and well built interiors. Honda too tried to take away the Creta’s crown with the BR-V, but the SUV didn’t turn out as popular as the carmaker would have hoped. Although the BR-V offered seven seats compared to five offered in its rivals, it received lacklustre response thanks to its MPV-like styling and utilitarian nature. The fact that the BR-V was based on the Mobilio didn’t help matters either. However, Honda is finally looking at turning the tide in its favour with the HR-V. Set to be launched by the end of this year, the HR-V loses out on two seats but has plenty of appeal thanks to its butch, SUV-like design. So let’s take a look at how the upcoming Japanese SUV stacks up against its rivals on paper.

Note : Since the HR-V hasn’t been launched in India yet, we have used the specs of the Indonesian-spec model for this comparo.

Based on the Renault Duster’s B0 platform, the Captur and the Kicks are similar in terms of dimensions. They are not only the longest and widest SUVs here, but they also have the maximum space between either axles. However, the two trail behind the Creta, albeit marginally, when it comes to height. The HR-V takes the middle ground here. While it’s not class-leading in any manner, it’s longer and has a bigger wheelbase than the Creta.

Overall, all cars featured here manage to look like scaled down SUVs rather than blown up hatchbacks. If you’re eyeing an SUV to make a statement, all of them seem up for the job. So let’s move on find out what each of these SUVs pack in terms of equipment.

All four SUVs share common features such as cruise control, climate control and a touchscreen infotainment system. Save for full-LED headlamps, the Creta is the best equipped here. It also gets some unique features like a wireless charger, ventilated front seats and a powered driver seat.

The Renault-Nissan twins aren’t that far behind the Creta, though. While they miss out on feel-good features such as a sunroof and powered seats, they get pretty much everything else you’d want from an SUV in this price bracket. Also the Kicks is the only one to offer a 360 degree camera, a valuable addition to any spec sheet that's as useful in the real world. On paper, the Indonesian-spec HR-V seems well equipped too. The only real miss is Android Auto and Apple CarPlay connectivity, which we’re sure Honda India will offer. Also, it must be said that the Creta and the HR-V are the only ones that get a sunroof, which is a feature most Indian car buyers love.

On the safety front, all SUVs seem well-kitted out. Only the HR-V and the Creta offer curtain airbags as well as ESP. The Renault-Nissan twins score high on safety as well, but we wish the Captur features some more safety tech.

Note : The Indonesian HR-V doesn’t get a diesel option. However, expect Honda to offer the India-spec SUV with the Civic and CR-V’s 1.6-litre i-DTEC motor.

First, let’s talk about the petrol options. The Honda HR-V clearly has the advantage here thanks to the larger 1.8-litre i-VTEC motor which churns out 139PS of power and 169Nm of torque. Coming up second is the Creta’s 1.6-litre petrol. The Renault-Nissan twins get the smallest engine here. Hence, it’s no surprise that they produce the least amount of power and torque. While the petrol Honda comes mated to a CVT gearbox only, the twins are limited to a 5-speed stick shifter. The Hyundai offers the most choice here as it is offered with both a 6-speed manual as well as a torque converter automatic. It must be mentioned that the popular 1.5-litre i-VTEC is also offered with the lower-spec HR-V in Indonesia. The smaller i-VTEC motor churns out 120PS of power and 145Nm of torque and comes mated to a 6-speed manual or a CVT gearbox

As for the diesel option, the HR-V for India is expected to be powered by the 1.6-litre i-DTEC that does duty in the Civic and CR-V. The Earthdreams diesel motor makes 120PS of power and 300Nm of torque. Although the CRDi motor in the Creta makes more power than the Honda, it churns out 40Nm lesser torque. Yet again, the Renault-Nissan twins are the least powerful in this lot. When it comes to shifting gears, all four cars come mated to a 6-speed manual as standard. However, the Hyundai trumps the others with its 6-speed torque converter, making it the only diesel-automatic combo in this bunch.

While replacing the BR-V with the more SUV-ish HR-V is certainly a step in the right direction, Honda won’t have it an easy time in the segment. Not only will the HR-V have to fight it out with the upcoming Kia SP2i-based SUV, it will also have to go up against the next-gen Creta, which is expected to be larger than the current model. So apart from the Kicks and Captur, the Honda has a number of hurdles to cross to take pole position. All Honda has to do is nail the pricing of the HR-V if it intends to succeed in this cut-throat segment.