Honda Steps Up Its Maxi-scooter Game With The Forza 750

And its primary target is the highly popular Yamaha TMax 560 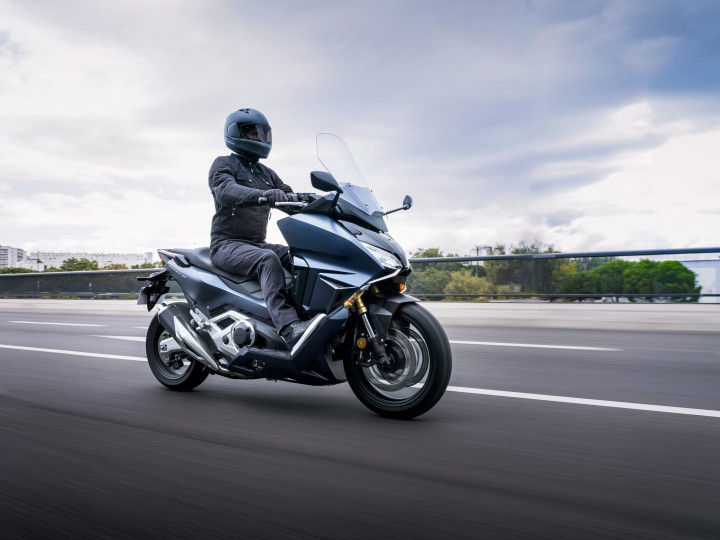 Honda has really upped its maxi-scooter game with the unveiling of the Forza 750. It is the largest scooter currently in its lineup, taking the mantle over from the dual-purpose X-ADV 750. Both scooters do share the same engine but that’s almost as far as the similarities go. This large maxi-scooter will finally be Honda’s challenger to Yamaha TMax 560 that has been ruling the roost in Europe.

The Forza 750 doesn’t look quite like the Forza 350 that we saw first being unveiled in Thailand earlier this year. It gets a twin-eyed LED headlight setup with neat air scoops beneath them. The front LED turn indicators too have been neatly integrated into the panels. There are a lot of creases and body lines that give off a very muscular feel. As a whole, the Forza 750 really does seem like a handsome, well built product for the macho rider.

A typical stepped-seat is found here as well with the rider perched at 790mm, which is a bit high for a scooter. The rider is welcomed via a 5-inch colour TFT dash that allows you to stay connected on the go. It even gets the Honda Smartphone Voice Control system that the India-specific H’ness CB350 also gets.

Honda has plonked in the same 745cc parallel-twin liquid-cooled SOHC mill from the X-ADV 750. The engine has been updated to meet Euro 5 emission norms. It manages to churn out 58.6PS and 69Nm, which can be a bit unnerving. Thankfully, Honda has packed in a couple of electronic rider aids on the Forza 750. You get four riding modes -- Standard, Sport, Rain and User -- the latter allowing the rider to alter the throttle map, the engine braking traction control and ABS setting to his/her liking.

The biggest highlight of the Forza 750 remains its Dual Clutch Transmission. Yes, this is the same semi-automatic gearbox that you get on Honda’s larger motorcycles like the Africa Twin and the Gold Wing. The advantage of the DCT here is that you can enjoy riding the Forza 750 as a traditional scooter or you can also take control over the gear shifting process via the button on the left side of the handlebar.

The tubular steel diamond frame is suspended by a chunky 41mm gold USD fork and a Prolink monoshock affixed to an aluminium swingarm. To rein in this 235kg behemoth, you have disc brakes at both ends with a radial caliper at the front. Honda uses a 17-/15-inch alloy wheel setup here, both wheels shod with radial tyres.

Maxi-scooters, especially ones like the Forza 750, are built primarily to tempt the European market. The chance of it ever arriving to our shores is next to none. However, Honda India has plans of riding in the Forza series to India, which we think will be the updated Forza 350. That will be a nice place to start educating the masses of the genre before we even aspire of seeing bigger scooters on our roads.