If there’s one segment that cemented their importance this expo, it would have to be SUVs. We pick the best of the best 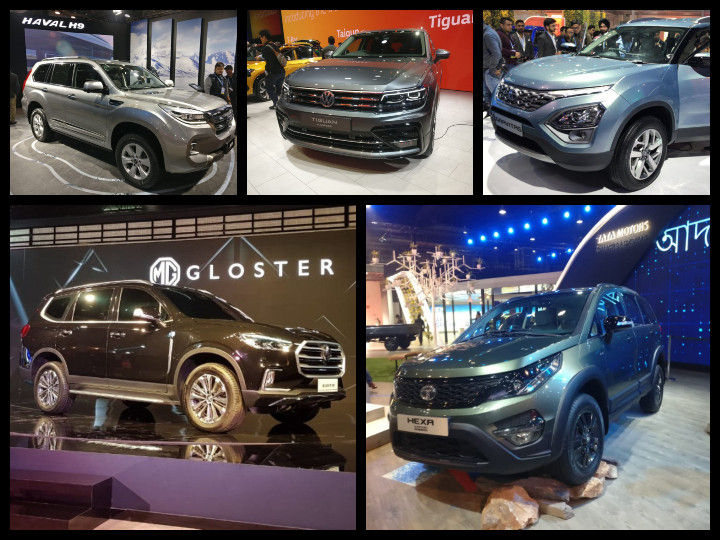 Every other year, India’s premier auto expo sees automotive creations of all shapes and sizes vying for the eyes of the car-buying and admiring public. And this year, there was one segment that stood head and shoulders above everything else. From seven sub 4-metre SUVs to 14 midsize SUVs to 5 full size SUVs slated to hit our roads soon, Auto Expo 2020 indeed had one SUV for every pocket. Or taste. Or garage size.

Of these, the full sized SUV segment had the most interesting dogfight brewing. Here’s a quick look at the heavyweights:

Morris Garages took the wraps off the Gloster, a full sized SUV which rivals the Ford Endeavour and Toyota Fortuner. The Gloster is based on the Maxus D90 and has been rebadged for our country. It’s a size bigger than its rivals and has loads of presence. Features include i-SMART connected car technology, a panoramic sunroof, a digital instrument display, LED headlamps and more. The Gloster is expected to be powered by a 2.0-litre twin-turbo diesel engine that puts out 215PS and 480Nm. Expect the Gloser to hit showrooms this festive season.

Great Wall Motors showcased the Haval H9 at Auto Expo 2020. It locks horns with the Ford Endeavour, MG Gloster, Toyota Fortuner and Mahindra Alturas G4 in India. The H9 scores massively on road presence thanks to its butch size and SUV design elements. It features a digital instrument panel, a touchscreen infotainment, a panoramic sunroof and more. While the CN-spec model comes with a 221PS 2.0-litre petrol, we expect the India-spec model to come with a diesel motor. Have a closer look at the H9 right here.

Tata Motors has taken the wraps off the Gravitas, essentially a longer Harrier with a third row of seats, at the Expo. The Gravitas doesn’t come with the panoramic sunroof found in the Harrier. However, it features an electric parking brake with an auto hold function. The Gravitas is powered by a BS6-compliant 2.0-litre Multijet engine developing 170PS and 350Nm. It’s offered with a 6-speed manual and 6-speed automatic. Expect the Gravitas to hit showrooms before the festive season begins.

The Tata Safari will exist in the BS6 era in the form of the Hexa Safari Edition. The revamped bumpers and blacked-out alloy wheels make it looks butch while the new black-beige interior colour scheme lifts the ambience. The Hexa Safari Edition will be powered by the familiar 154PS 2.2-litre Varicor motor upgraded to meet BS6 norms. It’ll be available with all-wheel drive only. The standard Hexa with automatic transmission and rear wheel drive variants will be available as well.

The Volkswagen Tiguan Allspace, essentially the longer Tiguan with a third row bench for added practicality, made its Indian debut at Auto Expo 2020. In terms of styling, the Tiguan Allspace comes with slightly revamped elements, freshening up its design. Inside, it comes with new features like digital instrumentation and connected car technology. The Tiguan Allspace will be available with a 2.0-litre TSI engine developing 190PS of power and 320Nm. It’ll be offered with 4MOTION all wheel drive technology and a 7-speed DSG. Find out when the Tiguan Allspace is hitting showrooms here.

The Skoda Kodiaq TSI debuted at Auto Expo 2020. It utilises a 2.0-litre TSI engine that develops 190PS of power and 320Nm of torque. The Kodiaq TSI will be offered with a 7-speed DSG and an all-wheel-drive system. This powertrain will replace Kodiaq's 2.0-litre TDI engine as the oil burner won’t be upgraded to meet BS6 norms and will eventually be discontinued. Expect to see the Kodiaq TSI by the end of 2020.

This is the list of full size SUVs that made a splash at Auto Expo 2020. Which SUV is your favourite? Let us know in the comments below.