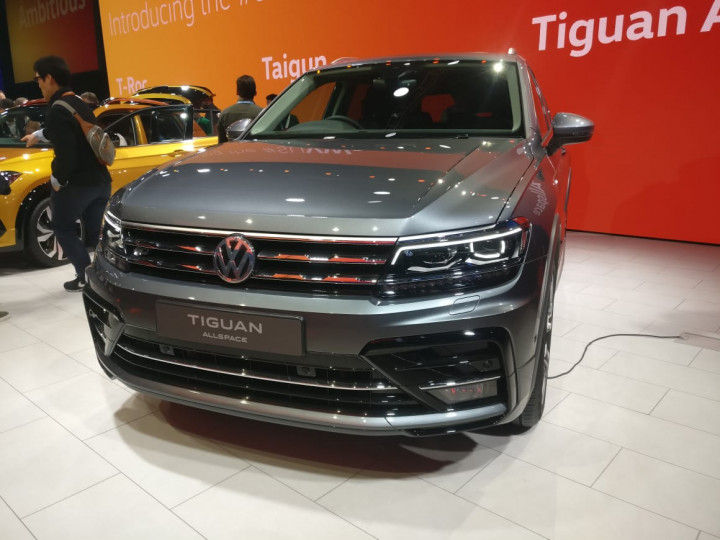 After being spied testing in Pune, Volkswagen has finally taken the wraps off the Tiguan Allspace SUV at Auto Expo 2020. It is essentially the Tiguan SUV with various extensions to open up cabin and boot space. Although Volkswagen showcased a 5-seater version, the carmaker will launch the 7-seater version in India by March 2020 with prices expected to start from Rs 35 lakh. Here’s what’s different from the standard model:

On the outside, the Tiguan Allspace looks nearly identical to the standard model with a front end consisting of a slatted chrome grille, but with revised LED headlamps. However, once you head towards the side profile, the differences are instantly recognisable. It is 4701mm long, 1839mm wide, 1674mm tall and has a 2787mm long wheelbase, with the gains coming from length and wheelbase. It also comes with 17-inch dual-tone alloy wheels. The rear features a split LED tail lamp setup and dual exhausts.

Inside, the Tiguan Allspace shares the same cabin setup as the standard model but with premium additions such as digital dials and a larger touchscreen infotainment system with connected car tech. Carryover features include a panoramic sunroof, dual-zone climate control, powered front seats, drive modes and cruise control.

Under the hood, the SUV is powered by a BS6-compliant 2.0-litre TSI petrol mill that delivers 190PS of power and 320Nm of torque. All this power is distributed to all four wheels via VW’s 4MOTION drivetrain paired with a 7-speed DSG gearbox.

Expect Volkswagen to launch the Tiguan Allspace shortly after its showcase at Auto Expo 2020. Prices are likely to start around Rs 45 lakh (on-road). Once launched, it will take on the likes of the Skoda Kodiaq, Ford Endeavour, Toyota Fortuner and Mahindra Alturas G4.