Auto Expo 2020: All The Top SUV, EV And MPV Reveals In One Place 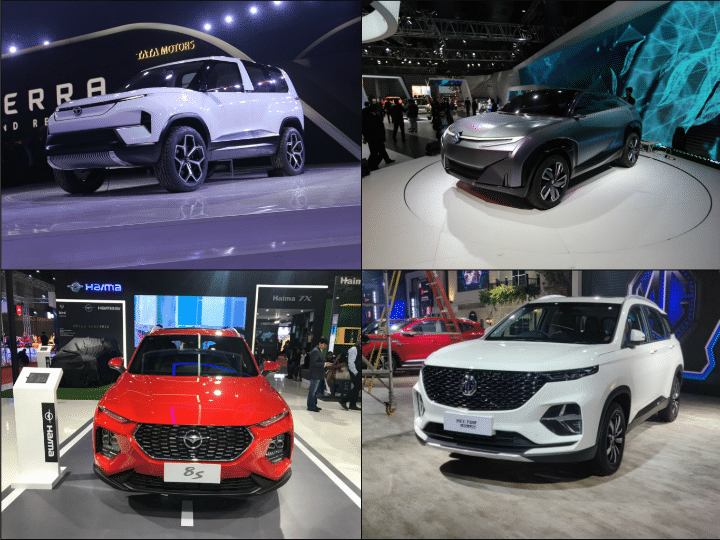 While there were a couple of cars launched at Auto Expo 2020, the majority of it consisted of unveils from a variety of manufacturers like Tata Motors, MG Motor India, Maruti Suzuki, Hyundai and Mahindra. We also saw newcomers like Haval and Haima unveil upcoming cars for India. Here’s a list of the major unveils at Auto Expo 2020:

Maruti Suzuki kicked off proceedings at Auto Expo 2020 by unveiling its first electric concept, the Futuro-E. It is an SUV coupe  with design highlights such as a bold Suzuki logo, connected headlamps and a boot spoiler at the rear. It also gets swivel seats and a digital centre console. To know more about it, head right here.

Maruti Suzuki’s vast lineup at Auto Expo 2020 finally saw the Vitara Brezza get a facelift and a petrol engine at Auto Expo 2020. It is powered by a 1.5-litre K15B petrol motor producing 105PS/ 138Nm, paired with  a 5-speed manual and a 4-speed automatic. It also gets cosmetic updates such as new headlamps, tail lamps, a revamped grille, and new dual-tone alloy wheels. To know more on what’s new, head here.

Great Wall Motors showcased the Haval H9 that could potentially rival the Ford Endeavour, MG Gloster, Toyota Fortuner and Mahindra Alturas G4 in India. It features a butch design with features like a digital instrument panel, a touchscreen infotainment system and a panoramic sunroof. In China, the H9 is powered by a 221PS 2.0-litre petrol mill. Expect the  India-spec model to get a diesel motor. Here’s more about it.

Tata Motors unveiled a close-to-production version of the HBX that takes a variety of styling cues from the Harrier and Nexon. Interior highlights include the dashboard, steering wheel, infotainment system, and the climate control knobs taken straight out of the Altroz. It is likely to be powered by the 88PS 1.2-litre petrol motor form the Altroz in its production guise. Expect a debut before the 2020 festive season.

Tata Motors finally debuted the longer iteration of the Harrier called the Gravitas. It doesn’t get a panoramic sunroof like the Harrier, but it features an electric parking brake with an auto hold function. A BS6-compliant 2.0-litre Multijet engine powers the Gravitas, developing 170PS and 350Nm and paired with a 6-speed manual and 6-speed automatic. It is likely to hit showrooms before the festive season begins.

Tata Motors surprised us by reviving the Sierra name via a concept EV that was unveiled at Auto Expo. It packs all the quirks that we love about the original Sierra as well as as some futuristic bits. If Tata finds the SUV commercially viable, it will be put into production in the near future. Head here for more.

The Tata Safari will continue to live on in the BS6 era thanks to the Hexa Safari Edition. It gets revamped bumpers and blacked-out alloy wheels and a new black-beige interior colour scheme to give it a butch stance. Powering the SUV is a BS6-compliant 154PS 2.2-litre Varicor motor available in all-wheel drive only. The standard Hexa with automatic transmission and rear wheel drive variants will also be available.

Mahindra  finally unveiled the all-electric iteration of the XUV300 at Auto Expo 2020. It features new headlamps, a redone grille, and tweaked tail lamps to differentiate itself from its standard counterpart. Inside, the eXUV300 remains largely similar, aside from a larger infotainment system, larger multi-info display and blue accents. Its technical specifications haven’t been revealed yet.

FAW Haima took the wraps off the 8S midsize SUV at Auto Expo 2020. It is essentially a MG Hector equivalent SUV with similar bits like split headlamps. However, it is more stylish and proportionate in profile. Interior highlights include a floating touchscreen infotainment system and a digital instrument panel. A 1.6-litre turbo-petrol engine powers the 8S and develops 195PS of power and 283Nm of torque. Here’s more about the midsize SUV.

One of Hyundai’s highlights at Auto Expo 2020 was the long awaited reveal of the 2020 Creta. It is based on the Kia Seltos and gets a new exterior design. A sneak peek of the interiors reveal a different setup compared to its Chinese counterpart, the ix25. It will be powered by the Seltos’ 1.5-litre diesel and petrol engines, with the 140PS 1.4-litre turbo-petrol also on the cards. To know more about the new Creta, head here.

MG unveiled the 360M, also known as the Baojun 360 in markets abroad. Judging by its silhouette and features, the 360M could be a potential rival to the Ertiga and the XL6, if launched in India. It is powered by a 1.5-litre petrol engine that develops 103PS and 135Nm of torque. Feature highlights include an 8-inch touchscreen infotainment system, second row captain seats, and electric sunroof.

Morris Garages unveiled the 6-seater iteration of the Hector at Auto Expo 2020. It features a third row bench and captain seats for middle row occupants. It also gets cosmetic tweaks to differentiate itself from its 5-seater counterpart. Here’s more about it.