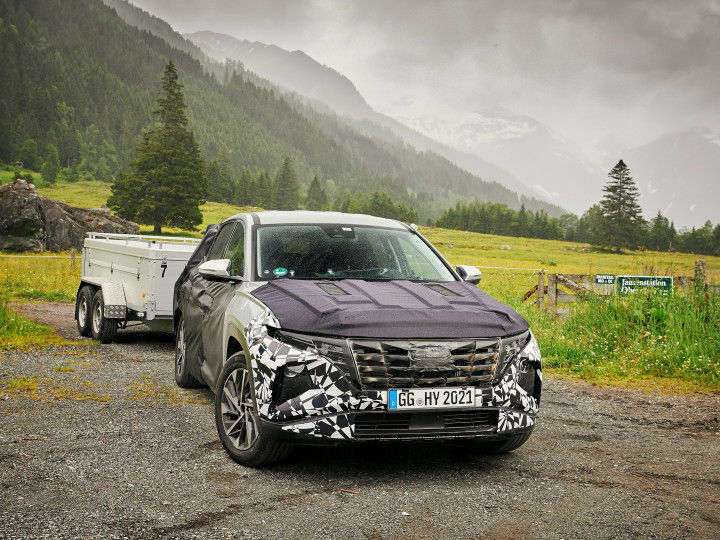 After being spied around tracks like the famous Nurburgring, the next-gen Hyundai Tuscon has finally completed testing and is set to debut on September 15. We will get to see quite a few updates in the SUV with Hyundai’s new Sensuous Sportiness design language giving it that futuristic edge.

Up front, the fourth-gen Tucson gets a sharper grille based on the new ‘Parametrics Design’, which features a large V-shaped grille flanked by similarly shaped LED DRLs. Reminiscing the Vision T Concept yet? The rear gets connected double-fang tail lights.

The Tucson might just be as comfortable on the inside as it is futuristic on the outside. Hyundai’s sketches of the interior revealed a premium interior, similar to that of the second-gen Creta. You can read all about that here.

In profile, the Tucson leans a bit towards the coupe side, with a sharp rake at the rear. After testing, its water fording capabilities were set at up to 300mm, whereas Auto Hold and Downhill Brake Control could manage to function between an incline of 30 and 45 percent. Hyundai also revealed the Tucson will get a choice of a standard and an extended wheelbase model for the first time.

The third-gen Tucson was recently facelifted in India, which means we will only receive the next-generation by early-2022 or even late-2021 if we’re lucky. The facelifted Tucson is currently available in a price range of Rs 22.30 lakh to Rs 27.03 lakh (ex-showroom Delhi). It competes with the Jeep Compass, Honda CR-V and the Skoda Karoq.