Now Control Calls And Music From Your Ather’s Dashboard

The latest OTA update brings added functionality, and the mobile phone app has been revamped too 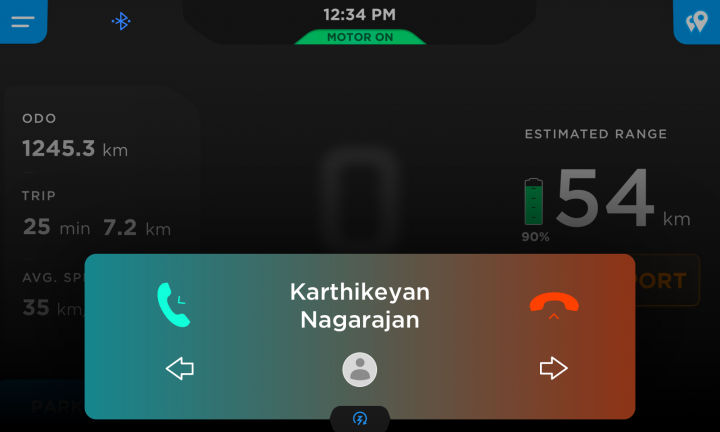 The Ather 450X already packs in one of the best digital displays on the market, backed by a great UI with loads of features. But not one to rest on its laurels, Ather has upped the ante with its 13th OTA update called Atherstack Atom. It brings with it added functionality, now allowing you to control music playback and phone calls right from the 450X’s dashboard itself.

Though the music will play on the phone itself, the scooter’s screen will display the track details and also allow you to play/pause and jump between tracks when stationary. Incoming calls will also show up on the display, giving the rider the option to accept or reject them. Last but not least, Ather has also revamped its Android and iOS mobile apps, basically creating new ones from scratch with an all-new UI. Full details are available in the press release below:

31st March 2021, Bangalore: Atherstack, Ather Energy's multitude of services right from the front-end to firmware to the data pipeline, has released its 13th OTA (Over the Air) update Atherstack Atom. This update enables the Bluetooth® based Music & Call feature on the Ather 450X. The latest update also includes the revamped version of the Ather App for all Ather owners with Android and iOS devices.

The Bluetooth® based Music & Call feature allows Ather 450X owners to safely pair the scooter’s 7- inch touchscreen dashboard with their smartphones. This allows the rider to view and control music and phone calls through the dashboard without any distractions and offers a seamless experience.

While the music is playing on the smartphone, the dashboard will show album art, the name of the song, and the artist in the display. When the vehicle is stationary, the rider can use the touchscreen to switch to the previous track, play/pause the current track or jump to the next track. The feature supports all popular music streaming services and podcast services. During calls, the rider can accept/reject the call on the touchscreen dashboard. For rider safety, a combination of the physical switches can be used while riding.

Not to forget Ather 450X always had Google Maps on the go, making reliance on riders using their phones on the go non-existent. Ather Energy is also working towards launching a tire pressure monitoring system (TPMS) which allows the rider to monitor the tire pressure which will ensure that the vehicle performs optimally. These additions will make the daily rides on the Ather 450X a seamless experience and limit riders from having to pull out their phones.

This update also includes a brand new Ather App which has been built from scratch to provide users with a clean, intuitive interface to interact with their scooter and with the larger Ather Community. The new App is developed in native Android and iOS frameworks, and includes a redesigned, contextual home screen to have easy access to all the information the user typically needs and a fresh new design language. Future updates will bring in more relevant features and information which will make the app even more engaging and useful. The app will be available for Android in the Google Play Store and in a few weeks will be released in the Apple App Store foriOS users.

From introducing upgrades like ‘Guide me home lights’ to ‘Real-time ride efficiency indicators’ to new riding modes, a ‘Dark Theme’ for the dashboard and now the Bluetooth® based Music and Call feature, Ather Energy is the first two-wheeler company in India to offer features and spec upgrades to existing consumers. The Ather Community and consumer research have driven the past Over-the-Air (OTA) software upgrades making Ather Energy’s products the only ever-improving two-wheeler and unlike any other automobile in the market.