While it’s essentially a longer Creta, the Alcazar gets a few crucial differences over the donor model for distinction 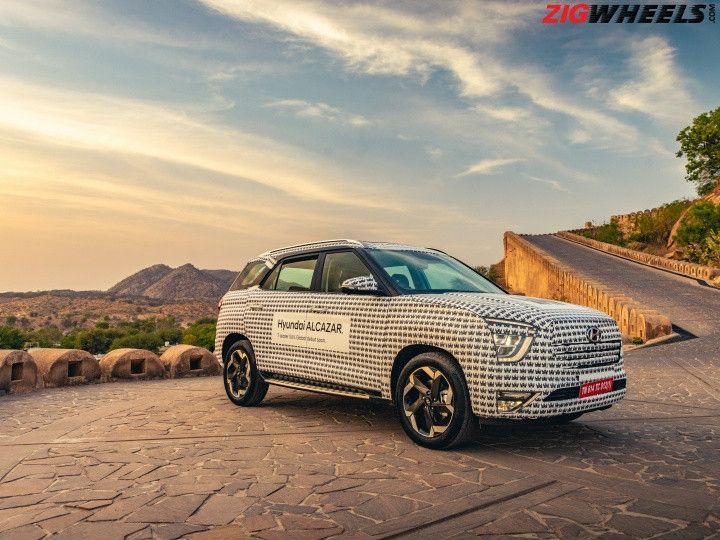 Hyundai will soon mark its presence in the midsize 7-seater SUV segment with the Alcazar. It’s essentially an extended version of the Creta that will take on the likes of the Tata Safari and MG Hector Plus. We got to spend a brief time with the Alcazar (which was still under camo) in Rajasthan. Here are all the details we know about the upcoming SUV so far:

Let’s start with something fun and light. The Alcazar we drove was a prototype and was draped in a castle-themed camouflage. Alcazar means fort in Spain and that could be the reason for this fancy wrap.

While the headlamps and basic front-end design is similar to the Creta, the Alcazar comes with a chrome studded grille (which extends to the DRLs), a redesigned bumper and different fog lamp/indicator housings for distinction.

In profile, the extra 150mm in between the wheels is quite evident. The Alcazar also comes with a longer rear overhang to accommodate the third row. The length in the design is absorbed by the rear door. It also sits on larger 18-inch alloy wheels (Creta comes with 17-inchers) that gives the bigger Alcazar a better stance. Also, a rear quarter glass, which isn’t provided in the Creta, makes the Alcazar’s third row experience airier.

Fun Fact: The Alcazar’s wheelbase is longer than the Safari and Hector Plus!

The Alcazar’s upright rear-end with more conventional  wrap-around LED tail lamps looks much better than the Creta’s polarising rear-end. Also, ‘Alcazar’ is written boldly on the chrome strip above the number plate housing. Opening the tailgate reveals a 180-litre boot with the all three rows up, which is bigger than the Safari (73-litres) and Hector Plus (155-litres).

We weren’t allowed to shoot the Alcazar’s interior, but based on sketches, we can say that its design is similar to the Creta, albeit in a black-brown colour scheme. That means the dashboard layout is quite simple with all controls at the right places.

The main highlight is the middle row, which can be had with captain seats or bench seats. Both of these get recline and slide function. The former comes with a unique floor-mounted central console that houses an armrest with storage, cup holders and even a wireless phone charger. To find out if these seats are comfortable, read our first look report. The Alcazar also gets front seatback trays with their own upholders as well. The window sunshade from the Creta is carried here as well.

One key added feature is the 360 degree camera which gets a nice display on the infotainment screen. It should retain most of the nice bits from the Creta such as the 10.25-inch infotainment system with Apple CarPlay and Android Auto, connected car tech, automatic climate control, ventilated front seats, powered driver seat, a panoramic sunroof, a branded sound system, and a digital driver’s display.

The Alcazar will be offered with a 159PS 2.0-litre petrol and a 115PS 1.5-litre diesel engines. Both engines come with a 6-speed manual transmission and an optional 6-speed torque converter.

The Hyundai Alcazar will go on sale in early-May. It is likely to be priced around Rs 1.5 lakh more than the Creta that costs Rs 10 lakh to Rs 17.54 lakh (ex-showroom). The Alcazar could be one of the most affordable seven-seater models in its segment, which consists of the MG Hector Plus, Tata Safari, and the upcoming Mahindra XUV700.