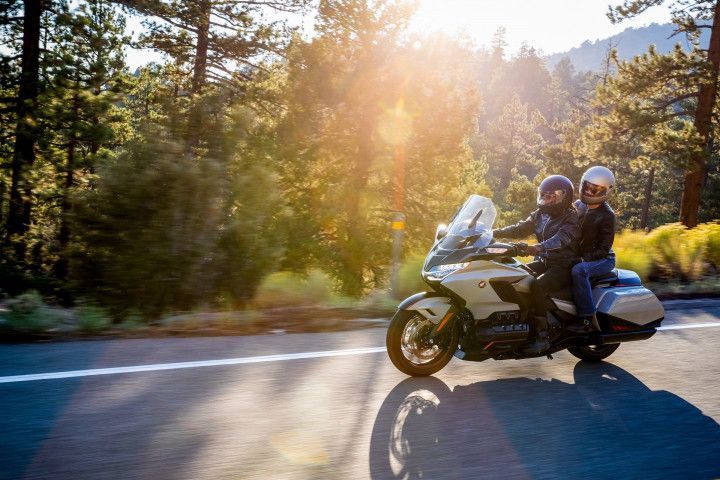 In the world of mahoosive touring bikes, very few can match the legacy of the Honda GL1800 Gold Wing. This mammoth of a motorcycle has been awe-inspiring since 1974, with the fifth-generation upping the ante in 2018. For 2021, the Gold Wing receives minor updates as well as a Harley-Davidson CVO-rivalling variant, blandly named ‘Tour.’

Honda hasn’t fiddled around with the Gold Wing formula much. What the 2021 bike receives is a new set of speakers that are lighter and produce a crisper sound when you are blasting down the highway. It also gets a new sinister-looking grey colour with subtle contrasting elements.

Also Read: Here Are All The Honda Two-wheelers Coming In 2021

On the Tour, you get the same new speakers as well as better pillion ergonomics. The large backrest comes replete with cushioned armrests for almost a couch-like experience. Plus, you get extra luggage space thanks to the integrated top-box. It also gets new colours with blacked-out mechanicals.

What remains constant is the feature set on the Gold Wing. The tourer continues to get a 7-inch colour TFT dash with both Android Auto and Apple CarPlay functionality built into the system. To connect to the dash though, you need a USB Type-C cable. LED lighting panels all around was a given with self-cancelling turn indicators coming in as standard.

No changes have been made to the 1,833cc flat-six engine either, aside from the mandatory emission updates. 126.44PS and 170Nm are respectably high figures for a touring motorcycle. One can opt for a six-speed manual or a seven-speed DCT on the Gold Wing. Electronic rider aids include ride-by-wire, traction control, hill start assist, and idle stop-start (on the DCT model).

A diecast aluminium twin-spar frame is suspended by a front double wishbone suspension and single-sided swingarm. Its 320mm front rotors are anchored by six-piston floating calipers with a similarly large disc and a three-piston caliper on the rear wheel.

In BS4 times, the Gold Wing was brought to India in its DCT avatar at Rs 26.85 lakh (ex-showroom). Considering the updates are minimal, the price hike could be around just a lakh more. We guess it will continue to arrive only with the DCT option but what remains to be seen is whether we will get the Tour variant as well.