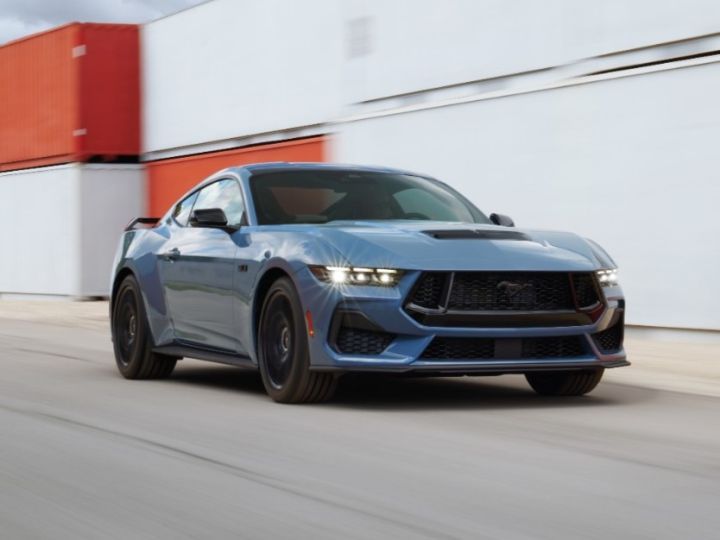 Ford has taken the wraps off the seventh-generation Mustang coupe and convertible at the 2022 North American International Auto Show. The all-new S650 Mustang features an evolution of the classic pony car’s design and gets new features and updated engines too.

New Mustang gets a slew of cosmetic changes

The new Ford Mustang is instantly recognisable with its new front grille and three-element LED headlights. It has a more angular front profile and sleeker overall design, but with the same overall proportions as its predecessor, the S550-generation ’Stang, with a two-door, four-seater layout and wide, squat sportscar stance.

At the rear, the new Mustang features ‘tri-bar’ LED taillights – a classic Mustang design, with a chunky plastic trim element and diffuser placed below the rear bumpers.

Inside, it has a redesigned dashboard that features a new curved display panel that houses the driver’s instrumentation display and touchscreen. The 12.4-inch digital driver’s display is backed by Unreal engine – the same name associated with video games. The screen is configurable via the 13.2-inch SYNC 4 infotainment touchscreen that can be paired with an optional Bang and Olufsen sound system.

Ford has moved the HVAC controls to the touchscreen, but the Mustang still gets a row of buttons below the centre air vents for operating the hazard lights, sports mode, traction control and other features. The engine start/stop button and volume knob flank this row of buttons.

Conveniently, the Mustang has overhead USB ports for dashcams or other devices to avoid messy wires dangling in the cabin.

The new Mustang gets updated versions of the 2.3-litre EcoBoost and 5-litre V8 engines. Although the carmaker hasn’t revealed the specs yet, it has said the naturally aspirated Coyote V8 is its most powerful ever, equipped with dual air intake box and dual throttle body design.

Both Ecoboost and GT variants will be offered with a new Performance Pack that adds an upper strut brace, Torsen limited slip differential, wider rear wheels and Brembo brakes, in addition to a new ‘drift brake’ electronic parking brake function. Optionally, the Performance Pack can be equipped with an active exhaust, Recaro sports seats and MagneRide adjustable suspension.

The Mustang is set to go into production around May 2023, with its home market of the United States getting first dibs at the sportscar. At least as things stand now, an India launch is on the cards, since the carmaker had promised to bring select models as completely built-up units to our shores. However, it could be a long wait for the S650 Mustang since it’s unlikely to make it here before 2024.