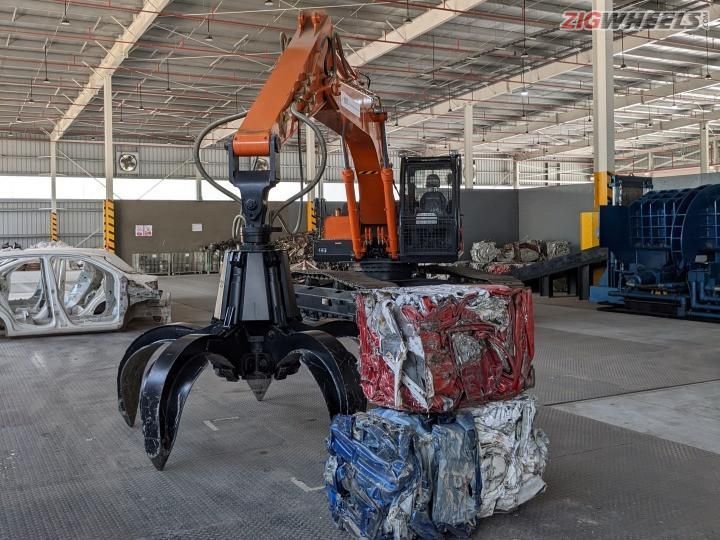 As petrolheads, seeing a car being torn down and then crushed into a cube of crumpled metal is painful to watch. We know that a car changes hands many times and keeps chugging along for several years before it reaches the logical end of its life – when it gets too expensive to keep running. Even then, there’s still some value in its parts that can be reused, recycled or repurposed.

Until recently, the industry around the end-of-life disposal of a car has largely been unorganised. It’s a complicated and ambiguous process to get a car or two-wheeler recycled with the proper road transport office (RTO) paperwork in place. Many owners choose to sell off or park and forget about their cars, instead.

After the government announced new guidelines for scrapping in August, new companies have emerged in the vehicle recycling space. One of them is Maruti Toyotsu India (MSTI), which has a scrapping centre in Noida, Uttar Pradesh. We went there to witness their car scrapping process and talked to the company about its history, present operations and future plans of expansion.

Which cars are scrapped at MSTI?

The company can scrap passenger cars and SUVs of any make and model at the Noida facility. MSTI receives these cars from multiple sources such as used car dealerships and individual owners.

Certain conditions could render your car liable to be scrapped, such as:

According to the new government rules, a vehicle can be run and re-registered as long as it meets the emissions and fitness regulations and undergoes an inspection every five years after the first registration renewal.

Nevertheless, the Delhi state government stands by its ban on petrol vehicles older than fifteen years and diesel cars over ten years old. Apart from scrappage, selling the vehicle in a different state within the 15- or 10-year period is the only recourse for car owners in the national capital region (NCR).

How does MSTI scrap a vehicle?

Each car is stripped down to its bare metal subframe that is crushed into a cube for easy transportation away from the facility. Components and sub-assemblies such as engines, airbags, catalytic converters and suspensions are sent to off-site facilities to be dismantled further and reused or recycled. The entire process takes around 200 minutes.

The process of scrapping a car is described below:

Once a car or SUV’s documents have been checked and it’s deemed fit to be scrapped (no pending challans, fees or taxes), MSTI gets it to the facility for a pre-scrapping check.

First, the car is checked for radioactive materials that may be hazardous to the workers’ health. A forklift lifts the vehicle and passes it through the radioactive scanner. If the car fails this test, in case it has been exposed to radioactive dust at a nuclear power plant, for example, it can’t be scrapped at the facility. There’s a risk of contamination not just at MSTI, but at other off-site centres and the smelting facility where the components are sent.

The dismantling process begins with removing the tyres. If the vehicle was powered by CNG, the gas in the system is extracted with a pump to prevent fire risks. In addition, the battery, AC coolant, spare tyre and other accessories are also removed.

Then, the vehicle is lifted to an elevated platform and all its fluids – engine and gear oil, wiper fluid, petrol or diesel – are drained out into large tanks. The technicians ensure that there’s no spillage to avoid contamination to the environment. In addition, they also remove the muffler from the car at this point.

The car goes from the elevated platform to a movable ground-level platform. At this point, the technicians take off the doors, bonnet, bumpers, fenders and other sheet metal components from the exterior. Now, the interior is more accessible for the next process.

Inside, the technicians remove the seats, carpets and floor mats and roofliner. The steering wheel and dashboard are also salvaged at this stage.

Once the interior is cleaned out of parts, it’s time to remove the mechanical sub-assemblies such as AC plumbing and power steering systems.

Next, the car’s put up on a scissor lift for engine and transmission removal. Technicians disassemble the brakes, wiring harness and suspension components.

This is the last step of the disassembly process, and by this point, all you have left are the windshield and some components such as the power steering motor. All these have to come out, and the car is then ready for the baler.

Stage 9: Crushing in the baler

At this point, the car has been stripped to its bare subframe. It’s lifted into the baler, a hydraulic press that crushes and shapes the body frame into a metal cube. The crushed frame is then processed in a smelter which extracts the steel and forms it into billets that are used to make different items such as construction materials.

Each of the components, body panels and interior parts are inspected and organised into different boxes, depending on their condition and reusability. The vehicle scrapping is complete at this point, and MSTI issues a destruction certificate to the owner that can be used to de-register the vehicle at the RTO and to get incentives (mentioned below) in the future.

Maruti Suzuki Toyotsu India is a joint venture between three companies – Maruti Suzuki (MSIL), Toyota Tsusho India, and Toyota Tsusho Corporation. It’s been in operation since November 23, 2021. Currently, it has a single facility located near Delhi, but there are plans to open a new facility in Gujarat, possibly sometime after 2025. Later, the company expects to set up scrapping centres in other states as well.

MSTI’s complex is a well-equipped operation with trained technicians who dismantle the vehicles and organise their components. The campus is spread out over 10,993 square metres, and it has a capacity to process up to 24,000 vehicles per year. It had been set up at an investment of Rs 44.1 crore between 2019 and 2021.

Apart from Maruti Suzuki, other carmakers and businesses are working to set up scrapping centres across the country. Tata Motors has already signed a memorandum of understanding (MOU) with the state governments of Gujarat and Maharashtra for car scrapping facilities in the states.

How can I get my car scrapped at the Maruti Toyotsu facility?

If you’re looking to get your old passenger vehicle scrapped, you can contact the Maruti-Toyotsu Noida facility on their official MSTI website for a quote. The company checks your car’s registration certificate, then contacts the RTO to see if the car is good to be scrapped. This part of the process can take up to six days.

Once the approvals are in (or the RTO doesn’t respond, in which case the car is assumed to be approved in six days), MSTI will contact you and work out the scrap value based on its own database of international and domestic parts prices. If you agree, the car can be scrapped at the facility, and the company will send the amount to your bank account. According to the company representatives, the scrap value can range anywhere from 30,000 to 80,000 depending on the weight, size, and condition of the car’s parts. The destruction certificate is sent to the owner via email.

What are the incentives for scrapping a car at MSTI?

On April 1, 2022, the government will announce incentives for new car buyers who have scrapped their older vehicles at one of the government-registered scrapping facilities. They’ll get up to 25 percent off the road tax amount for their new vehicle, and a waiver for the registration fees.

The larger incentive is for the environment – unorganised scrap yards contribute to environmental pollution and contamination of water bodies due to oil leaks, spills and incorrect disposal of parts. In comparison, the Maruti-Toyotsu facility takes care to avoid collateral damage to the environment from the scrapping process.

With a growing number of cars on our roads, it’s only a matter of time before old cars become a significant issue. But facilities like MSTI are bringing much-needed organisation to the process of recycling a vehicle. The upcoming government incentives and the easy, straightforward process of scrapping a car at MSTI could motivate more car owners to properly dispose of their vehicles, if only to save a few thousand rupees on their next car purchase.