BYD’s first private offering in India, the e6 electric MPV, has hit the ground running with over 450 units of the EV having been delivered to private buyers across the country. The MPV has had a presence in the country since November 2021, however, the carmaker only recently made it available for private buyers as well.

Dope on the BYD e6

Being an all-electric MPV, the e6 is propelled by a 96PS electric motor (delivering 180Nm) which is fed by a 71.7kWh Blade battery pack. The power is delivered to the front wheels only and the EV has a WLTC claimed range that ranges between 415 and 520km  (city and highway combined) before the battery dies. The setup has a charging capacity of up to 60kW that can completely replenish the MPV’s battery in 90 minutes.

It is currently being sold as a completely knocked down (CKD) unit that is locally assembled at its facility in Chennai. Available in a single GLX variant, the BYD e6 is priced at Rs 29.15 lakh (ex-showroom).

For the money, you get features such as a 10.1-inch rotatable touchscreen, five-inch MID, automatic climate control and six-way powered front seats. Safety of the occupants is ensured by dual front and side airbags, seat belt reminders (front and rear), ISOFIX child seat mounts, rear parking sensors with reversing camera, and a tyre pressure monitoring system.

The electric MPV made it to the India Book Of Records after it covered a distance of 2203km- the maximum for an electric car as part of the six-day ‘Sustainable Drive for a Sustainable India' initiative from Mumbai to Delhi.

BYD is expanding its touchpoints in the country, with new showrooms in Delhi, Mumbai, Kochi, Vijayawada and Hyderabad, along with newly appointed dealer partners in five cities - Gurugram, Chandigarh, Indore, Jaipur, Pune and Kolkata. BYD’s lineup will soon be expanded with the addition of the Atto 3 electric SUV that is likely to be launched around the brewing festive season. More details on the carmaker’s manufacturing plans and future EVs are expected to surface at the 2023 Auto Expo. 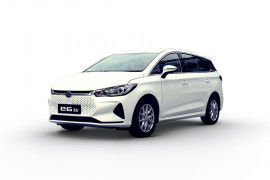