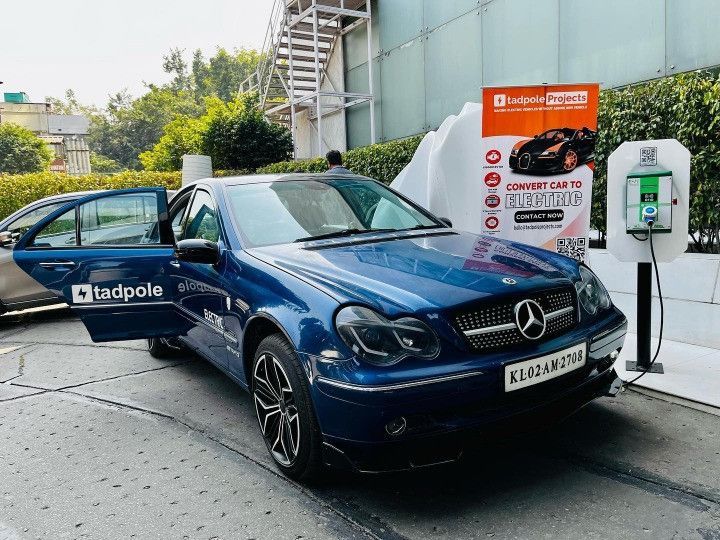 The electric vehicle (EV) startup Tadpole Projects has built a new EV conversion kit based on the early-2000s W203 Mercedes-Benz C-Class. It replaces the stock vehicle’s petrol or diesel engine with a bespoke all-electric powertrain that offers up to 150km of range.

Tadpole Projects is a Delhi-based company that has converted iconic cars such as a 1948 Volkswagen Beetle and a 1936 Austin 10 to EVs. The C-Class is a 2003 C 180 model that would likely have come with a 1.8-litre supercharged petrol engine.

As standard, the Mercedes C-Class EV has a claimed range of up to 150km, but you can spec the EV conversion kit with up to 250km of range, and a DC fast charging option is also available. AC power takes five to six hours to juice up the standard 150km range model.

The stock Mercedes C 180’s original petrol engine likely produced around 140PS, but the new electric motor makes 55PS. The EV is capable of a top speed of 90kmph to 150kmph depending on the owner’s preference. It’s still lower than the stock Mercedes C 180’s 220kmph top speed, but it’s quite respectable for an EV. For reference, the Tata Nexon EV and MG ZS EV max out at speeds of 120kmph and 140kmph, respectively.

Tadpole Projects’ Mercedes kit could be a shot in the arm for luxury car owners in Delhi, where the government has prohibited the use of diesel vehicles older than ten years and petrol vehicles older than fifteen years. The prices haven’t been announced, but it’s likely to set you back by over Rs 6 to 9 lakh. Currently, the government doesn’t offer any subsidies or other concessions for EV conversions.