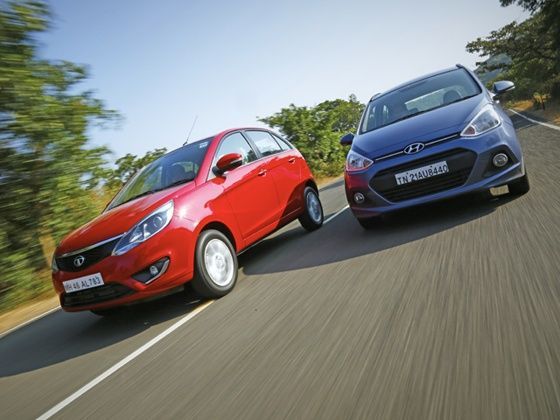 Not so long ago we got our hands on the Bolt, Tata’s latest offering in the hatchback segment. And we were pretty impressed by it too. In fact, it is just the kind of product that Tata needs to prove that they can consistently build cars of respectable quality. But, that simply isn't enough to survive in the competitive hatchback segment. And even more so when your buyers are spoilt for choice with a car like the Hyundai Grand i10. The question then is does the new kid on the block have enough to take on a car that has already established a place for itself in the market?

On the outside, both cars look pretty similar to their respective sub 4-metre sedan siblings. And as far as the beauty contest is concerned, both are pretty evenly matched. The projector headlamps, smiley grille and the silver accents near the fog lamps give the Bolt a touch of aggression. And at the back there are the flame shaped tail lights and the chrome above the registration plate to add a touch of style. Its overall design looks clean but the resemblance with the Vista is a tad bit disappointing.

Now the Grand i10 on the other hand pleases in its own way. Its curvy design flows smoothly from the front to the back and the large hexagonal grille with the black body mouldings at the side gives it a nice contrast. It has some great details too like the 8 spoke diamond cut alloy wheels and stubby tail lamps.

While on the outside both cars are pretty much neck to neck, the insides speak a different story altogether. The Bolt gets an all-black dash with bits of silver around the centre console and the steering wheel. Then there is the touch screen infotainment system and of course the button for the three driving modes – Eco, City and Sport. The instrument cluster is informative but could have been designed better. The quality of plastic is good but overall finish of the materials used could have been better. Even at the back, there is ample of space and the under thigh support is impressive as well.

In comparison, the Grand i10s cabin looks a lot more welcoming and lot of it is thanks to the dual tone treatment of the dashboard. The overall build is good and quality of materials is also a lot better which makes the car feel premium. The centre console is neatly laid out; there is the audio system here that comes with Bluetooth, AUX and USB connectivity. Below it are the air con controls, sadly no electronic climate control. The steering wheel is leather wrapped and behind the wheel are those nice looking dials. To keep things cool at the back there is also an AC vent for the rear passengers. Whilst the Grand i10s interiors feel a lot richer, it’s the Bolt that has more space. That said, the Grand i10 too is amply spacious for three at the back. With a storage capacity of 256 litres, the Grand i10s boot is larger.

Tata as well as Hyundai have tried to up the ante in this segment of cars by offering more features in them but sadly neither has gone all the way. While the Bolt in this top-end XT variant has some interesting segment firsts like the projector headlamps, the touch-screen infotainment system, automatic climate control, speed sensing auto lock and three driving modes.

The Grand i10 in the Asta (O) trim on the other hand, has keyless entry, reversing camera and button start. Both cars get the Bluetooth, AUX and USB connectivity. With regards to safety, both cars get two airbags as well as Anti-lock Braking System. The Bolt though also gets Electronic Brakeforce Distribution.

Both cars sport a 1.2-litre 4-cylinder petrol engine, but at 90PS and 140Nm Bolt makes slightly more power and torque than the Grand i10’s 83PS and 113Nmm. The power delivery from this turbocharged unit is a lot linear and the torque too is available lower down the Rev range. This engine is so peppy and drivable that in the city or on the highway you can stay behind the wheel pretty much all day long without having to worry about making those swift overtaking manoeuvres. The five-speed gearbox though is precise but clunky but aside from that, the Bolt is a lot more eager than the Grand i10.

The Grand i10s engine feels a lot more refined than the Bolt; we have to give it that. It does climb up the revs pretty well too but in a more refined manner. It isn’t as quick off the line as the Bolt either. Having said that, it feels at home when kept in its peak power band but push it closer to the edge and you start feeling the dead revs. The gearbox is lot smoother and the ratios too are pretty sorted, thanks to which it boasts of a better top whack.

Now this is where the battle gets really intense. Like the Zest, the Bolt offers a good ride quality but the fact that the Grand i10’s softer suspension setup gives it an edge over the Bolt. It rides over rough roads without allowing the undulations of the road seep into the cabin even at the back. While the Grand i10 scores in terms of ride quality, the Bolt has a much better seating position thanks to better thigh support and wider seats. It even has better visibility from behind the wheel. The large ORVMs further help in this.

Tata has managed to setup the Bolt just right. It not only rides pretty well, but manages to take on a series of bends with ease too. There is a fair bit of feedback from the steering wheel as well as from the tyres. Push it hard and the 175/65 15-inch Goodyear tyres do start squealing. The Grand i10 on the other hand is set up a lot softer. While it rides better than the Bolt over bad roads, when you start to push it around corners it just doesn't feel that confident. There is quite a bit of body roll and the artificial steering feel doesn't make things any easier. And then it also runs on thinner 165/65 14-inch tyres.

Both cars are priced pretty similarly. At Rs 5.80 lakh, the Hyundai Grand i10 is cheaper than the Tata Bolt that cost Rs 6.06 lakh for the top-of-the line petrol variants. What makes it more complicated is that they are equipped similarly too. But Tata has launched the Bolt at an ‘introductory price’ which clearly hints at a price rise in the near future. As per ARAI claims the Grand i10 returns an efficiency of 18.9kmpl and the Tata Bolt should easily achieve a similar figure.

So far in this segment, it was the Grand i10 that ruled the roost thanks to a smooth engine, premium looking interiors and a good ride quality. But now with the launch of the Bolt, things have started to look a little difficult for the Grand i10. Especially considering that there is not much of a difference between the two. And taking that into consideration, the Bolt seems like a much better value for money proposition despite being priced marginally higher. It has more features, offers more space on the inside, has a nice peppy engine and decent enough handling too. To us then, Bolt is the car you should bet your money on.

Hyundai Grand i10 Facelift: In Pics

Nios Effect: The Hyundai Grand i10 Now Only...