Hyundai Santro Vs Celerio vs WagonR vs Tiago vs GO: Spec Comparo

How does the new Hyundai Santro compare with the competition on paper? 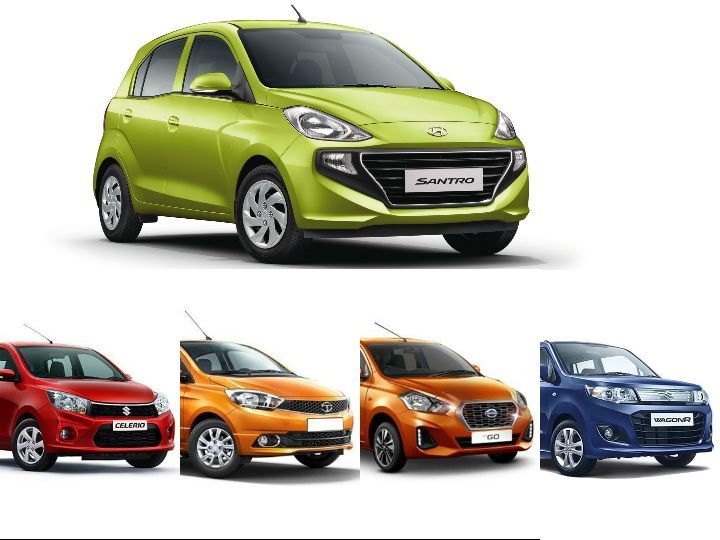 Hyundai has resurrected the Santro nameplate and hopes to set a new benchmark in the mass-market hatchback segment as a whole. The 2018 Santro’s main rivals include the Maruti Suzuki Celerio, Maruti Suzuki WagonR, Tata Tiago and the Datsun GO. We crunched the numbers, and here’s what we found:

The Hyundai Santro is not the longest car in the segment. In fact, it takes the second-last spot ahead of the Celerio. It is the second widest in the class, which should mean squeezing in three people should be less of a hassle. The ‘Tall-Boy’ proportions of the Santro shine through when the height of all the cars here are compared. The WagonR tops the list followed by a tie between the Santro and the Celerio. Again, the Santro does not have the longest wheelbase in the comparison, the top spot is taken by the Datsun GO, which is based on the larger Nissan Micra hatchback. The Hyundai Santro lags behind the others when it comes to boot space as well, the larger GO and Tiago have better storage capacities.

The Santro is not the biggest car on paper but it’s not worse than the competition either. A side-by-side real-world test should settle the matter once and for all (stay tuned!)

The Tata Tiago's petrol engine is also more powerful and torquier than the others, this is thanks to a larger capacity motor. The Hyundai is not the best in terms of performance or efficiency, but it should be a smooth one considering it is the only 4-cylinder unit here. It felt like one, read our first impressions here. The Datsun GO loses some brownie points for being the only car in the comparison to not feature an automatic transmission at all, but don't expect Datsun to offer one anytime soon anyway.

It is surprising to see how the Datsun GO matches the Santro in terms of features available, missing out on rear A/C vents, auto-unlock door locks and a micro-antenna but offering alloy wheels and LED DRLs as a bonus. The Santro does justify the higher price it commands by offering features and a sense of premiumness not seen in this segment.

The Datsun GO steals the thunder from the Santro by offering almost every feature as standard across the range rather than limiting them to the higher trims. The Hyundai Santro is the only car here to be offered with a rear parking camera and that fact should be applauded. The Maruti siblings are showing their age, missing out on rear parking aids altogether. The Tata Tiago is specced in a top-heavy fashion as far as safety equipment goes, with most of the safety equipment offered as optional extras rather than as standard, rear parking sensors are only offered on the more expensive XT and XZ variants only.

The Datsun GO may seem the most value for money offering here, considering it offers almost everything the Santro does but for a much less price. Of course, the quality is in no way a match for the Santro, but if you were in the market for a fully loaded hatchback - the Datsun GO makes a lot of sense. The Hyundai Santro, meanwhile, is well equipped but misses out on AMT/CNG variants in the top of the line fully loaded Asta trim. Forcing customers to choose between convenience, safety equipment and fancy features is a habit Hyundai has to give up.

By Hyundai's own admission, 34 per cent of all customers seeking a new Santro booked an AMT variant - and many of those people (an estimated 8000 people) would not mind paying extra Rs 50,000 for safety and convenience. You can check out the complete analysis of the Hyundai Santro's pre-launch booking numbers here.